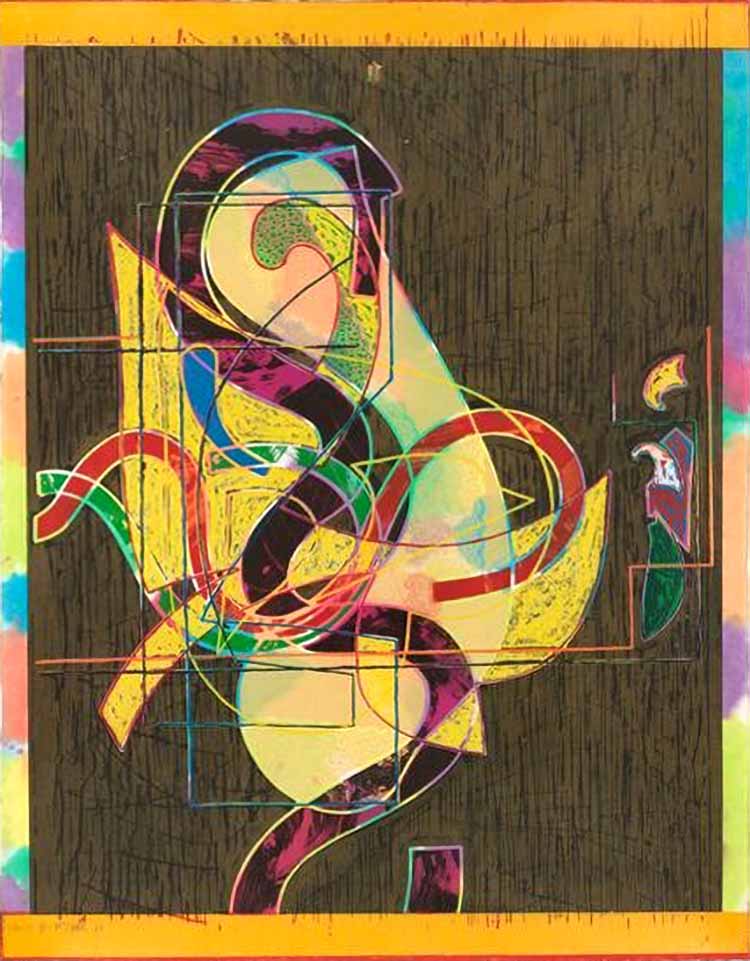 Frank Stella Pergusa Three, State I, 1983 is a fascinating composition in white, black, red, green, blue and yellow from the artist’s Circuits Series of 1982-84. This work is an illustration of the Pergusa race track in Italy, one of the race tracks Stella visited across the globe in the 1970s. This work shares the same composition as the artist’s Pergusa Three from the same year and appears to be a modified ghost print of the original. The foreground of this work is composed of several layers of contours rendered in saturated hues. The largest of these contours differs from the one in Pergusa Three, which is a thick red form that runs from the bottom center of the composition upwards and nearly touches the top edge of the work. The one that appears in Pergusa Three, State 1, is rendered in a pattern of black and magenta. Smaller and more complex lines dance alongside this shape, and they sit atop a faded black background that mimics the texture of wood grain. The work has a hand-painted quality as a result of Stella’s use of woodcutting and relief printing.

Frank Stella Pergusa Three, State I from the Circuits Series, 1983 is fully documented and referenced in the below catalogue raisonnés and texts (copies will be enclosed as added documentation with the invoices that will accompany the sale of the work).

Framed to museum-grade, conservation standards, Frank Stella Pergusa Three, State I, from the Circuits Series, 1983 is presented in a complementary moulding and finished with silk-wrapped mats and optical grade Plexiglas.