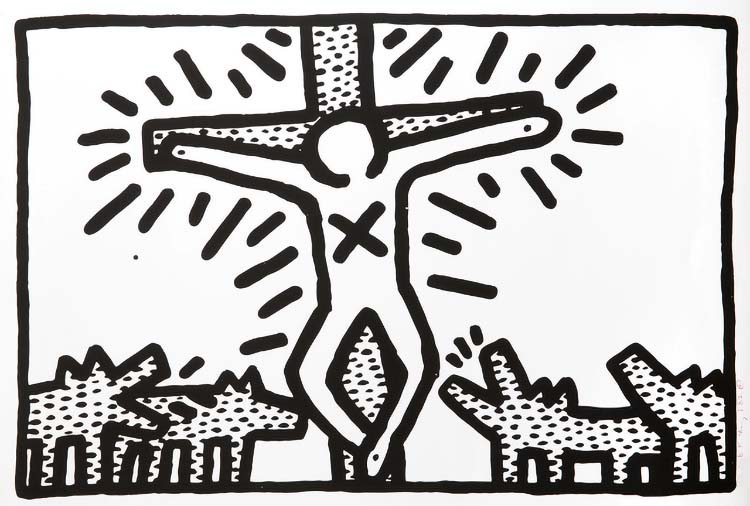 Keith Haring Untitled (Plate 6), 1982 is an enthralling work created in the primary years of the artist’s career. This work is made with lithography, a method of printing that utilizes a flat stone or metal plate coated in a greasy substance that ink adheres to; this process enhances the precise contours that are a staple in Haring’s work. In Untitled (Plate 6), 1982, a human-like figure is suspended crucified on a large speckled cross, and a large black ‘X’ is inscribed on the figure’s abdomen. In the lower right and left corners of the composition, dog-like figures that are signature icons in Haring’s work stand behind the crucifix looking up at it and barking. The dogs are marked with the same speckled pattern as the cross in front of them, implying that they are of the same origin. Haring often uses the visual language of advertising and popular media to discuss controversial subject matter; in this work, he uses the image of the crucifix and his iconic dogs to illustrate an opinion on religion.

Catalogue Raisonné & COA:
Keith Haring Untitled (Plate 6), 1982 is fully documented and referenced in the below catalogue raisonnés and texts (copies will be enclosed as added documentation with the invoices that will accompany the sale of the work).

About the Framing:
Framed to museum-grade, conservation standards, Keith Haring Untitled (Plate 6), 1982 is presented in a complementary moulding and finished with silk-wrapped mats and optical grade Plexiglas.