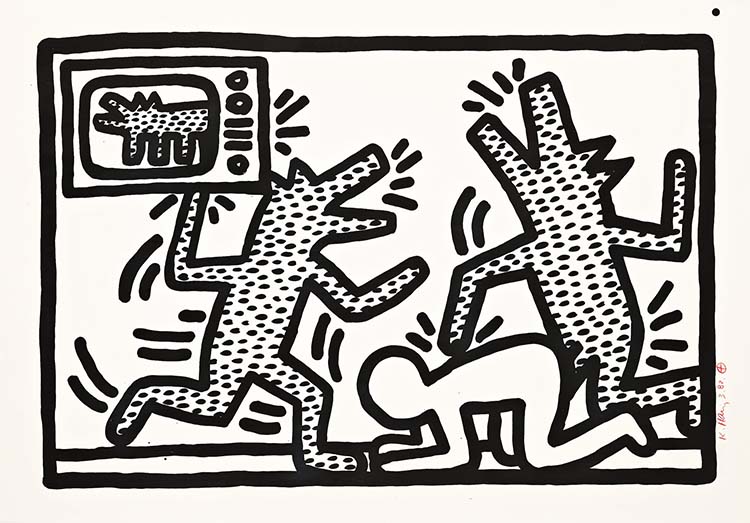 Keith Haring Untitled (Plate 3), 1982 is a simple but captivating work. The bold black lithographic line that make up its design produces vivid contrast that is enticing to the eye. On the right side of the composition, one of Haring’s signature dog-headed figures stands pressing another figure to the ground. From the left runs another dog carrying a television with the image of a dog rendered in the same fashion displayed on the screen. The artist often uses the visual language of advertising to discuss the culture of mass media. In this work, Haring illustrates this fundamental Pop idea by depicting two dogs impelling someone to consume imagery of themselves, propagating their domain. The artist often uses the symbol of the dog in violent or forceful scenes; in this work, the usage of the dogs implies that Haring associates mass media with aggressiveness and power.

Catalogue Raisonné & COA:
Keith Haring Untitled (Plate 3), 1982 is fully documented and referenced in the below catalogue raisonnés and texts (copies will be enclosed as added documentation with the invoices that will accompany the sale of the work).

About the Framing:
Framed to museum-grade, conservation standards, Keith Haring Untitled (Plate 3), 1982 is presented in a complementary moulding and finished with silk-wrapped mats and optical grade Plexiglas.