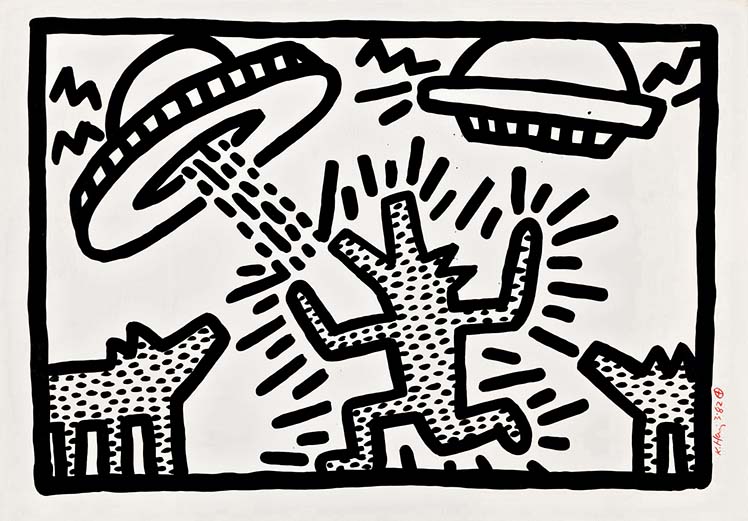 Keith Haring Untitled (Plate 4), 1982 is an enthralling work from the primary years of the artist’s career. To create this work, the artist used the process of lithography, a printing method that uses a flat stone or metal plate coated in a greasy substance so that ink adheres to, while the non-image areas are made ink-repellent. This method creates graphic imagery that lends itself well to Haring’s signature style. In this work, two dogs that often appear in the artist’s work are place in the bottom left and right corners. The look upon a third dog who stands in the middle of the composition, stricken by the beams of two UFOs floating in the top right and left corners. The artist’s dog icons are often depicted engaging in subtly violent behaviors. This work differs slightly in that force is being inflicted on one of these figures as his companions gaze upon it silently.

Catalogue Raisonné & COA:
Keith Haring Untitled (Plate 4), 1982 is fully documented and referenced in the below catalogue raisonnés and texts (copies will be enclosed as added documentation with the invoices that will accompany the sale of the work).

About the Framing:
Framed to museum-grade, conservation standards, Keith Haring Untitled (Plate 4), 1982 is presented in a complementary moulding and finished with silk-wrapped mats and optical grade Plexiglas.