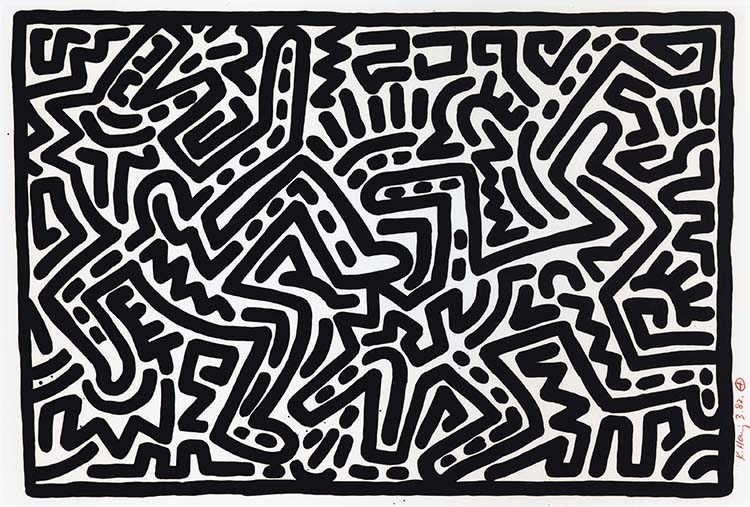 Keith Haring Untitled (Plate 1), 1982 is a complex and engrossing work from the artist’s early career. The majority of Haring’s work is characterized by iconographic forms illustrated in bright, saturated colors. This work, however, is rendered completely in black graphic line. This linework is executed with lithography, a method of printing that uses a flat piece of stone or metal coated in a material that ink adheres to. In Untitled 1, 1982, the artist depicts two humanoid figures with dog heads, a recurring image in his work, engaging in a violent chaotic dance. The figure on the left stands balancing on one foot with his head tilted back, barking. The other figure on the right side of the composition is turned horizontally and his head rests underneath the raised foot of the figure opposite him. Both figures are lured into abstraction by their background which is composed of the same line weight and imagery as the principal subject matter.

Catalogue Raisonné & COA:
Keith Haring Untitled (Plate 1), 1982 is fully documented and referenced in the below catalogue raisonnés and texts (copies will be enclosed as added documentation with the invoices that will accompany the sale of the work).

About the Framing:
Framed to museum-grade, conservation standards, Keith Haring Untitled (Plate 1), 1982 is presented in a complementary moulding and finished with silk-wrapped mats and optical grade Plexiglas.