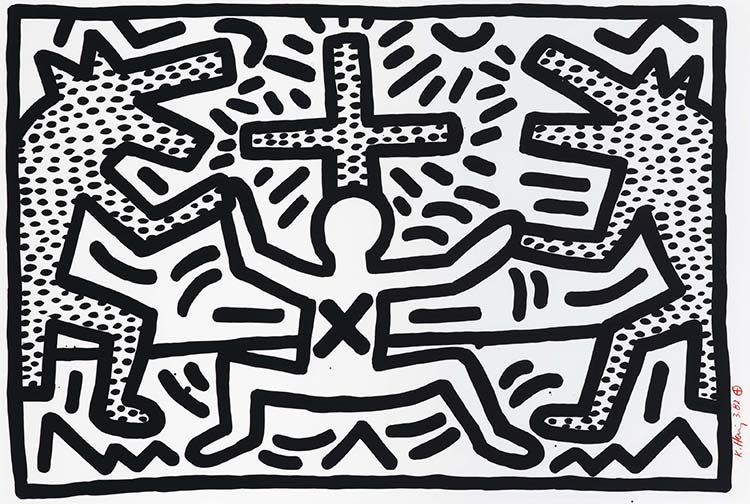 Keith Haring Untitled (Plate 2), 1982 is a compelling work from the earlier years of the artist’s career. This work employs imagery consistent with Haring’s oeuvre but is distinctive in that it is depicted entirely in black and white. The bold linework in this piece is created with the use of a lithographic plate coated in black ink in the design of the composition. In the foreground of Untitled (Plate 2), 1982, a figure sits in the center of the work with a black ‘X’ drawn on its abdomen. The action lines that surround him imply that he is frantic about the two figures with dog heads who appear to be dragging him towards a crucifix that lies in the background. These barking dogs are a recurring icon in Haring’s work and are often associated with violence, a topic the artist often discusses in his practice. The crucifix, a symbol of popular religion, suggest that the artist may be expressing an association of religion with cruelty.

Catalogue Raisonné & COA:
Keith Haring Untitled (Plate 2) , 1982 is fully documented and referenced in the below catalogue raisonnés and texts (copies will be enclosed as added documentation with the invoices that will accompany the sale of the work).

About the Framing:
Framed to museum-grade, conservation standards, Keith Haring Untitled (Plate 2), 1982 is presented in a complementary moulding and finished with silk-wrapped mats and optical grade Plexiglas.