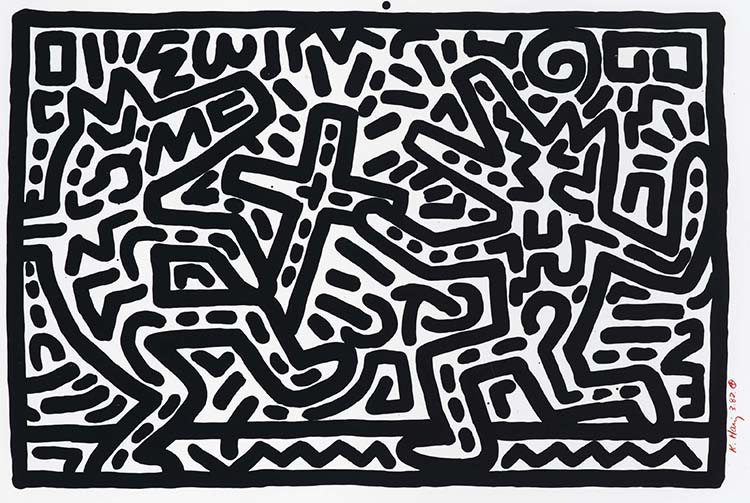 Keith Haring Untitled (Plate 5), 1982 is a complex work made up of black lithographic line atop a white background. These lines dominate the composition and nearly drive the piece into abstraction. This work is similar in composition to Untitled (Plate 1), 1982, another lithograph by the artist created in the same year. In this work, two dog-like figures that often appear in Haring’s work seem to be engaging in a violent and chaotic dance. In Untitled (Plate 5), 1982, two figures of the same design are placed on the left and right sides of the composition. Behind them, the artist has rendered a large cross and action lines ejecting from its contour, emphasizing its significance to the work’s narrative. The dog figures appear to frolic in excitement with each other, likely in regard to the presence of the cross in the background. Haring frequently discusses controversial topics in his work including sex, money and religion; in this work, he uses the image of the cross to explore such ideas.

Catalogue Raisonné & COA:
Keith Haring Untitled (Plate 5), 1982 is fully documented and referenced in the below catalogue raisonnés and texts (copies will be enclosed as added documentation with the invoices that will accompany the sale of the work).

About the Framing:
Framed to museum-grade, conservation standards, Keith Haring Untitled (Plate 5), 1982 is presented in a complementary moulding and finished with silk-wrapped mats and optical grade Plexiglas.