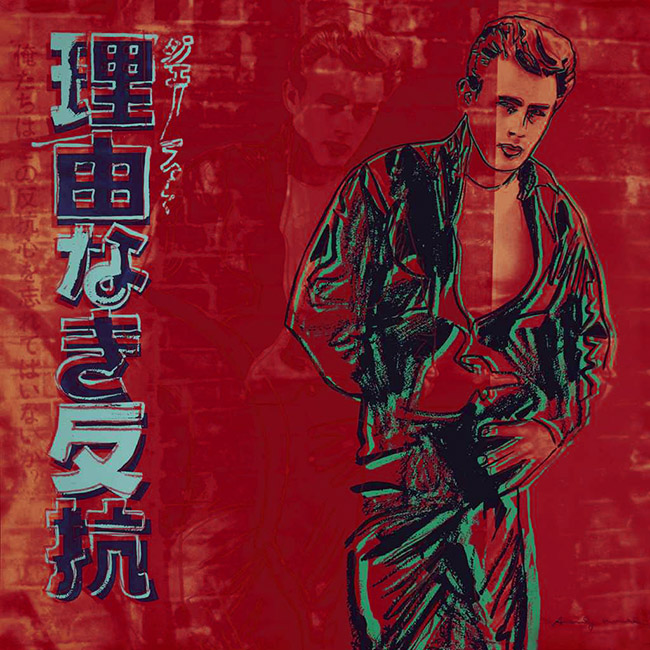 Andy Warhol Rebel without a Cause (James Dean), from the Ads Series, 1985 is an iconic image from the pop artist’s acclaimed 1985 Ads Series. The Ads Series is a portfolio of ten screenprints, and each composition within the series repurposes imagery borrowed from commercial advertisements. The series is consistent with the artist’s obsession with popular culture and celebrity.  In Warhol’s Rebel without a Cause, his reference is the 1955 film’s Japanese movie poster. The sultry and moody James Dean is rendered in black and green against a red hued background. The background is lifted from the same movie poster which is transformed through the red coloration. Although featuring a bright crimson palette, the background imagery maintains more of the detail of the original image including the brick wall. Subtly layered beneath the bold and iconized image of Dean, we see a faint reminder of the photographic source. To the left of the composition, the title is printed in bold Japanese characters, colored in shades of dark and light blue. Simplified into sharp, contrasting outlines, Warhol stylizes the Hollywood icon and immortalizes the late actor’s masculinity and angst.

Created in 1985, this color screenprint on Lenox Museum Board is hand signed by Andy Warhol (Pennsylvania, 1928 - New York, 1987) in pencil in the lower right. Numbered from the edition of 190 in pencil in the lower right; aside from the editions of 30 Artist's Proofs, 5 Printer's Proofs, 5 Exhibition Proofs, 10 Hors Commerce, 10 numbered in Roman numerals, 1 Bon à tirer, and 30 Trial Proofs, this work is printed by Rupert Jasen Smith, New York, and published by Ronald Feldman Fine Arts, Inc., New York.

Andy Warhol Rebel without a Cause (James Dean), from the Ads Series, 1985 is fully documented and referenced in the below catalogue raisonnés and texts (copies will be enclosed as added documentation with the invoices that will accompany the sale of the work).

Framed to museum-grade, conservation standards, Andy Warhol Rebel without a Cause (James Dean), from the Ads Series, 1985 is presented in a complementary moulding and finished with silk-wrapped mats and optical grade Plexiglas.