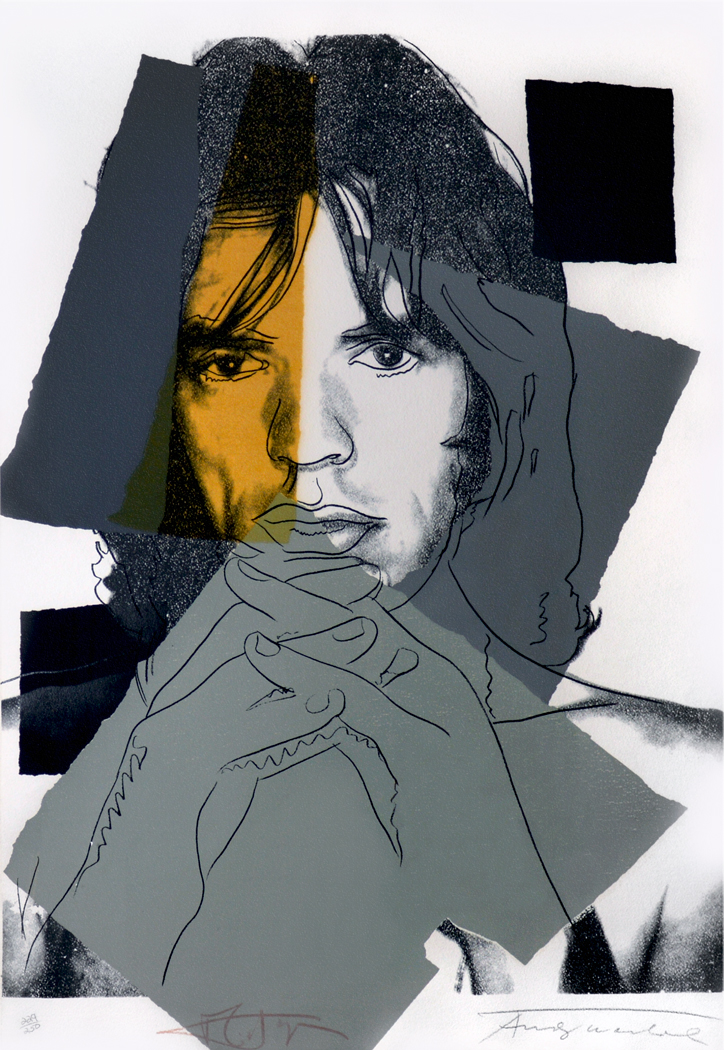 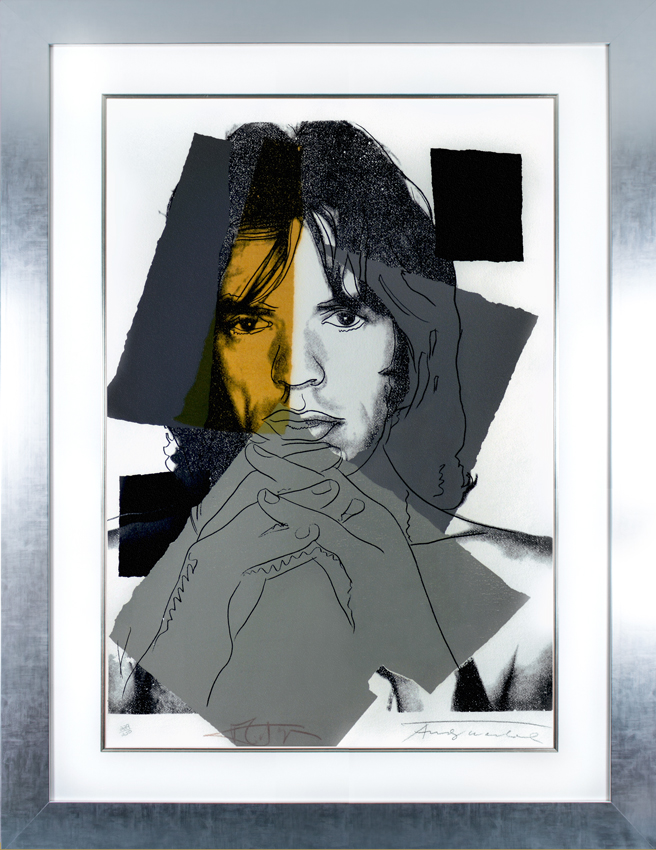 Andy Warhol Mick Jagger, 1975; In a portrait as grand in scale as Mick Jagger's influence on rock and roll music, Andy Warhol creates a fabulously colorful and abstract work profiling his fellow friend, artist, and musician. It is a revealing, yet lighthearted portrait, showing Jagger in a pensive pose, with hands folded and brought up to his lips. However, dramatic use of Warhol's iconic color blocks scattered haphazardly throughout the composition echo Jagger's own approach to music, allowing us to envision his exciting and lively performances; coupled with his own public persona, celebrity status, and colorful personal life, this portrait is able to capture the essence of we, as the audience, view him. A combination of a pixilated photographic image combined with Warhol's own hand-drawn lines make way for the perfect melding of talents by both artists, Warhol seemingly creates a portrait of Jagger's folded hands with simple, curved lines while highlighting them in a mass color of grey. A single splash of bright marigold yellow adds life and vibrance to the overall image, helping to anchor our focus to meet Jagger's outwardly gaze.

Created in 1975, this work is from a portfolio of 10 screenprints of Mick Jagger printed on Arches Aquarelle paper. Hand-signed by both Andy Warhol (1928 - 1987) and Mick Jagger (1943 - ) along the bottom margin and numbered 229/250 in pencil in the lower left. Not all prints from this edition were signed by Mick Jagger, making this one of Warhol's rarer works. Printed by Alexander Hainrici, New York and published by Seabird Editions, London.

"Warhol intended his portraits to be seen - as vanitas images, history paintings, or simply glamour poses - he did more than any other artist to revitalize the practice of portraiture, bringing renewed attention to it in the avant-garde art world. He reflected the desires and dreams of a new decade and expanded his cast to include the latest characters from the world of sports, television, and politics and also dramatically escalated his portrait commissions" (Feldman 3rd ed. pg. 22-3) .

Catalogue Raisonné & COA:
This work by Andy Warhol, Mick Jagger, 1975 is fully documented and referenced in (copies will be enclosed as added documentation with the invoices that I will enclose with the sale of the work) :

1) Feldman, Frayda and Jörg Schellmann. Andy Warhol Prints: A Catalogue Raisonné 1962 - 1987, 3rd ed. Listed and illustrated as catalogue raisonné no. II.147 on pg. 89 and detailed on pg. 88.
2) A Certificate of Authenticity will accompany this work.

About the Framing:
Mick Jagger, 1975 is featured in a custom designed, Spanish-style frame with bold, black and gold accents. The contemporary frame style encases and further features the modernity and grandiose size of the work. All materials are archival and to museum quality standards. The framing is completed with white, linen-wrapped mats set under an archival Plexiglas® cover.