The Prado Museum, or officially known as the Museo Nacional del Prado, is notably considered to be one of the greatest art museums in the world and continues to maintain its status as one of the worlds most visited sites. Located in Central Madrid, it hosts one of the world’s finest collections of European art, dating back from the 12th century to the early 20th, which were based on the former Spanish Royal Collection when it was originally founded in 1819, as well as the most concentrated and dedicated collection of Spanish art. The works of Francisco Goya, El Greco, Peter Paul Rubens, and Diego Velázquez are a few of the highlighted artists housed here, with Goya’s works being the most extensively represented. Velázquez’s works were also known and responsible for bringing many of the museum’s collection of Italian masters to Spain.

The Prado is part of the Golden Triangle of Art, with the Thyssen-Bornemisza Museum, their collection focusing on the historical through contemporary art, and the Museo Reina Sofía (Museo Nacional Centro de Arte Reina Sofía), which houses 20th century modern art. The collection currently has 8,200 drawings, 7,600 paintings, 4,800 prints, and 1,000 sculptures, this not including many other works of art and historical documents.

Most excitingly, the Prado is welcoming the return of Picasso within their walls, exhibiting Buste de Femme (Bust of a Woman) c.1943. The last time Picasso had adorned their walls was in 2015 from the exhibition Ten Picassos from the Kunstmuseum Basel, and prior to that in 2011-2012. Picasso’s Bust of a Woman has been generously loaned to the Prado Museum for 5 years by the Aramont Art Collection to the American Friends of the Prado Museum and is currently on display in a gallery devoted to the works of El Greco, along with Velázquez’s The Buffoon Calabacillas c.1639. Keeping in mind that both artists heavily influenced the works of Picasso, it is clear that the museum wanted to create a dialog between these three artists together to help define not only Velazquez and Goya’s works, but to define a subtle timeline of the ways Picasso was influenced.

Buste de Femme 43 (Bust of a Woman), as detailed by the Prado, is an exemplary example of Picasso’s response to the violence of World War II. During this period, he would distort many features of his female images in a radical manner and Bust of a Woman is not exempt from these facial disfigurements. Painted in a single day on October 7th, 1943, he applied rapid, confident brushstrokes to bring to life the bust of this woman; in cubist fashion, half of her face is in profile, one eye tepidly looking to the side, the worry and tension uniquely described. Wide-eyed, she stares directly forward with her other eye, seeming apprehensive, the tension palpable. The brushstrokes in the background are messy and confused, allowing us to empathize with the emotions simmering beneath the surface. In contrast, Picasso has painted her in shades of blues and greens for her clothes, bright orange ornaments hanging from the sides that catch the eye immediately, along with the orange circular ornament in the middle of her hat. The resonance of the background tones and the resolute presence of her feminine features divulge her deep understanding and knowledge of the Spanish and their pictorial traditions.

Javier Solana, Chairman of the Board, stated “American Friends’ actions are certainly great news for Spain and all those who visit our country attracted by our artistic and cultural heritage.  A painting from one of our greatest artistic geniuses which up to now had been in a United States’ private collection will be displayed in public for all of those who love Picasso’s work, our museums and culture.  The Arango Montull Family’s and American Friends’ generosity is helping enrich Spanish cultural heritage.”

The news has created a stir as it opens a new panorama of Spanish art for the museum. Prior to today, Picasso’s date of birth, 1881, had acted as a cut off between the Prado and Reina Sofía Museum because in 1955 a royal decree stated that artworks of artists born before 1881 go to Prado while those who came after ’81 would go to the Reina Sofía.

The exhibition Calder-Picasso, curated by the two seminal artists’ grandsons, Alexander S.C. Rower and Bernard Ruiz-Picasso, is the first major exhibition to put the relationship between these two master artists at the forefront by bringing together over 100 paintings, drawings, and sculptures. After a successful European tour with stops in Paris and Málaga, Calder-Picasso is making its United States debut at the de Young Museum in San Francisco. The exhibition revolves around the two artists’ unique approaches to rendering space, or perhaps more accurately, non-space. Exploring themes such as line, volume, weight, and gravity, the exhibition investigates the ongoing impact of the interactions between these artists’ distinct philosophies regarding the void, or empty space.


Calder and Picasso both worked and lived in Paris and even met in 1931, but the two could hardly be considered friends. The two did not even speak the same language (Calder knew little French, and Picasso did not speak English), but there is no doubt that their work was in conversation. The two often had pieces in the same shows, perhaps most notably at the 1937 World Fair held in Paris, where Picasso’s Guernica and Calder’s Mercury Fountain both resided in the Spanish Pavilion. It became apparent that the two artists, who would exhibit together multiple times in the future, were both wrestling with the same questions of abstraction, sparking a dialogue that would change the conception of art from that point forward. The exhibition is modeled to reflect this dialogue, designed as a sort of visual conversation between the two artists as they continually worked to represent the void in their artworks.

The two artists played with volume, dimensionality, and silhouettes, forming new ways to distort perceptions of reality. Calder’s approach came readily in the form of sculpture, where he was clearly interested in understanding how space is occupied, a topic most frequently probed by connecting two and three dimensional forms through sculpture. His sculptures, such as his wire sculptures and famous mobiles, are composed solely of two-dimensional shapes that relate to each other just as much as they relate to the negative space around them. Included in the exhibition is Calder’s iconic Aztec Josephine Baker, which exemplifies his interest in manifesting line drawing in three-dimensions. Picasso’s approach to the void was both formal and emotional, coming through strongly in his paintings and drawings. The Picasso works chosen for the exhibition meditate on the friction between emptiness and fullness by skillfully abstracting figuration. This abstraction explores the tension between depth and geometry while also acting as a means of representing distortions of time and the emotional inner self. Though their approaches differed, Calder and Picasso shared core interests and their connection has had an indelible impact on art-making today.

Though an opening date has not yet been set for Calder-Picasso at the de Young, preparations for the show have been ongoing. Plans have been made to open the show as soon as February 26, pandemic restrictions allowing. It will be on view in San Francisco through May 23 before continuing its U.S. tour, traveling to Atlanta, then Houston.

Olga Khokhlova was born in Ukraine in 1891. She became a ballet dancer in the Ballets Russes as a young woman. She was a dancer in Parade in 1917, which was a collaboration between Sergei Diaghilev and Jean Cocteau. With Cocteau’s urging, Picasso became in charge of the costumes and set design for this production. Their romance was slow at first – she was chaste and required courting but Picasso was 35 and desperately wanted to start a family. 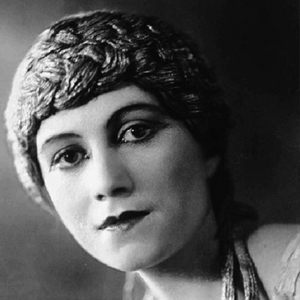 Olga Khokhlova was born in Ukraine in 1891. She became a ballet dancer in the Ballets Russes as a young woman. She was a dancer in Parade in 1917, which was a collaboration between Sergei Diaghilev and Jean Cocteau. With Cocteau’s urging, Picasso became in charge of the costumes and set design for this production. Their romance was slow at first – she was chaste and required courting but Picasso was 35 and desperately wanted to start a family. When the ballet moved on to tour South America, Khokhlova ultimately stayed in Barcelona with Picasso.

They were finally married on July 12th, 1918 at a Russian Orthodox Church with Jean Cocteau serving as a witness. Back in Paris, the couple moved in next to Picasso’s dealer Paul Rosenberg where the two slowly climbed up the ladder of society.

While summering in Dinard in 1922, Olga fell ill with “gynecological troubles”.  She had to have surgery. She got ill again years later in 1928, which ended in a series of operations and periods of lengthy recovery. Marie-Thérèse Walter was a fixture in Picasso’s life at this point. Khokhlova did not know about Walter for much of their affair, but she was aware of her husband’s other indiscretions. She became – rightfully – jealous and resentful. Picasso fed off this negative energy in much of his art of Khokhlova at this time. Khokhlova finally left the clinic in 1929, and here proceeded a time of Picasso’s double life between his wife and his mistress.

Like most of Picasso's women, Olga's life generates speculation and curiosity among many. Although she died in 1955 still legally married to Picasso, the idea of her being Picasso's first wife and mother to his first child resonates today.