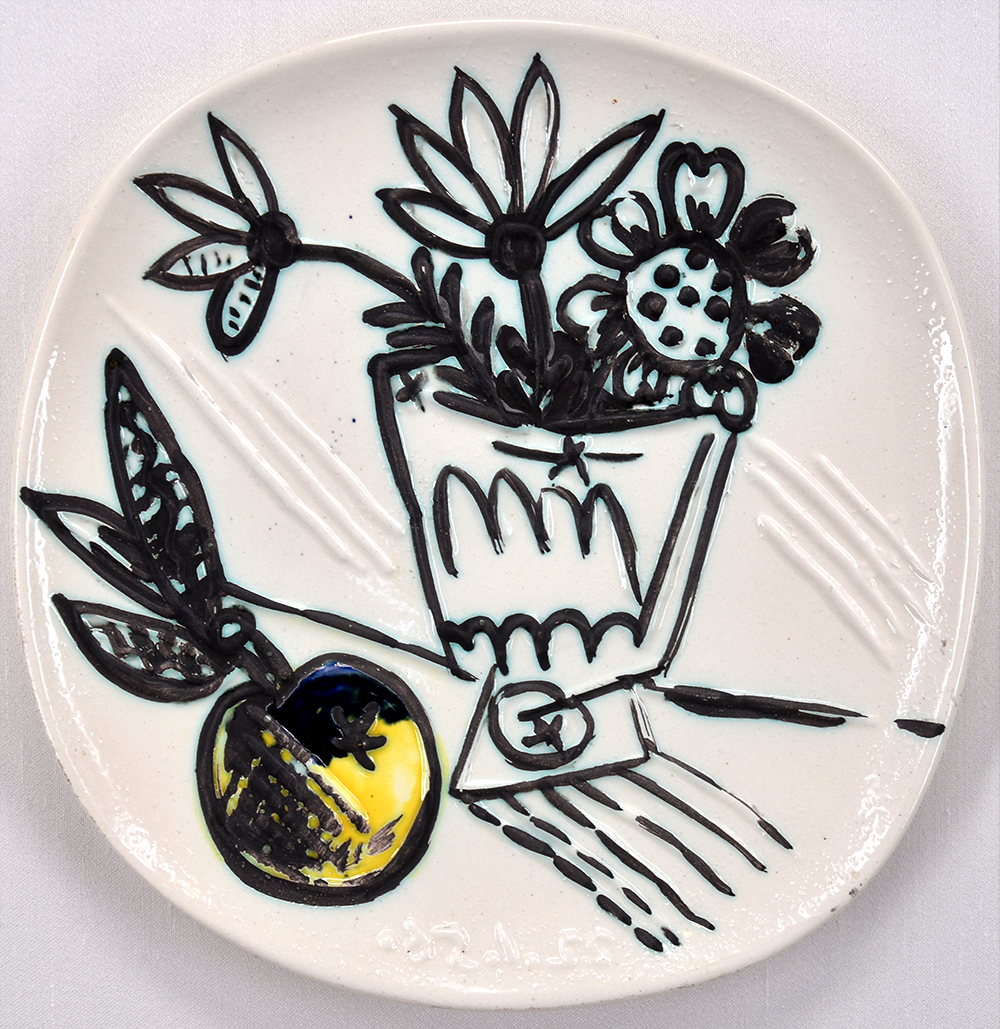 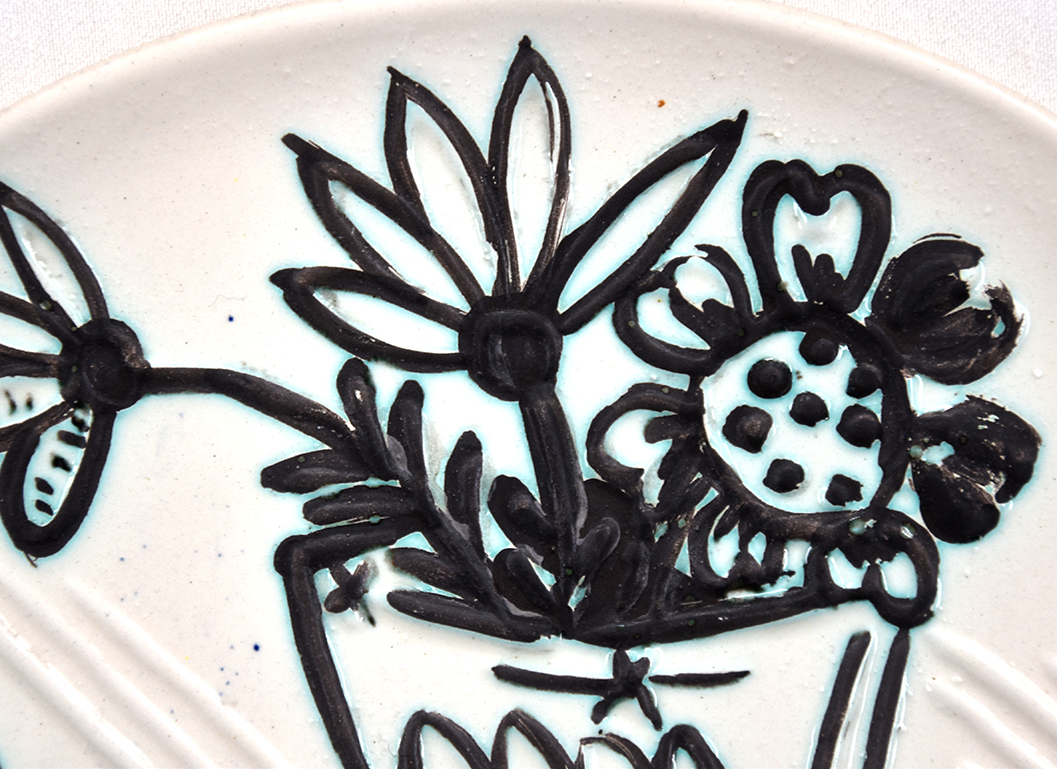 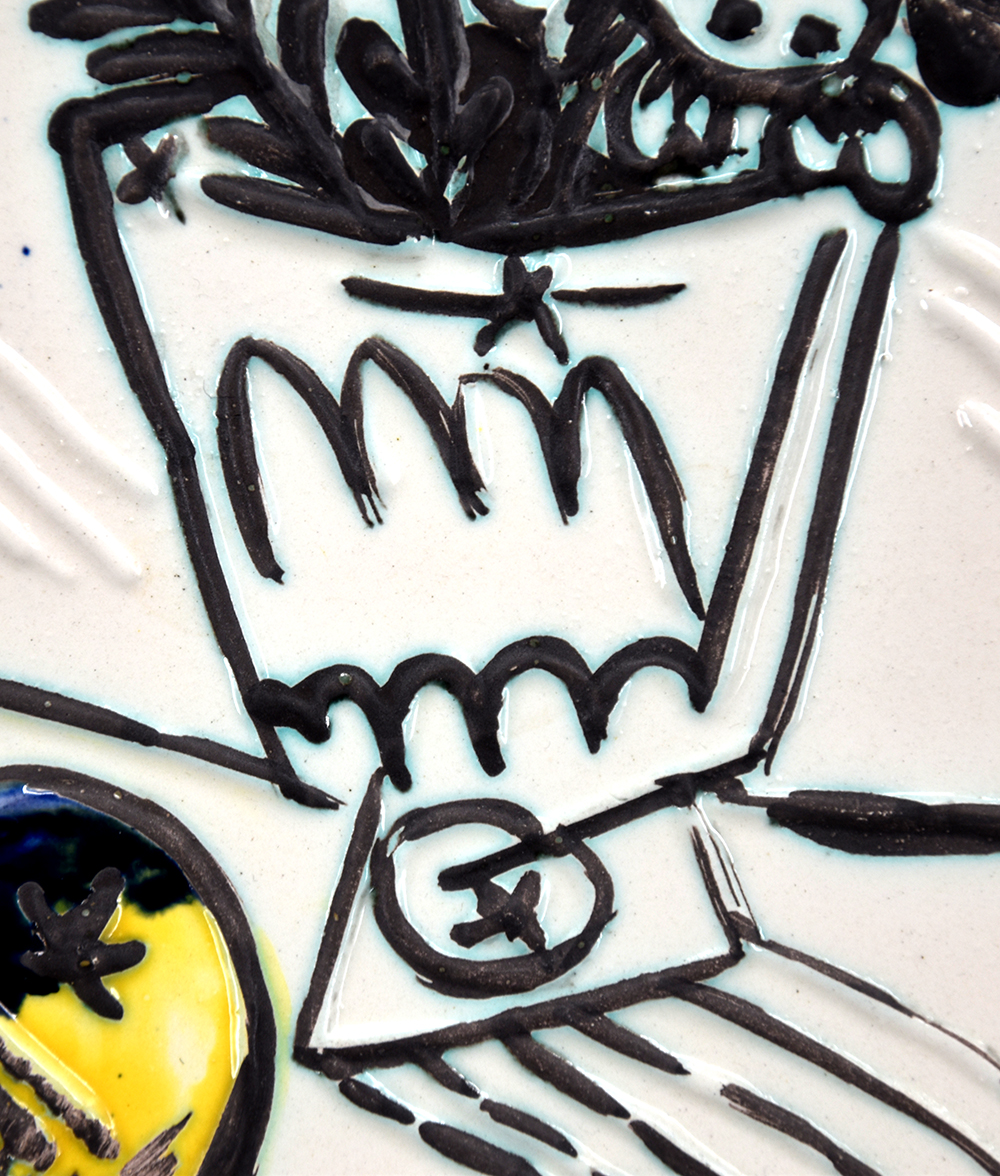 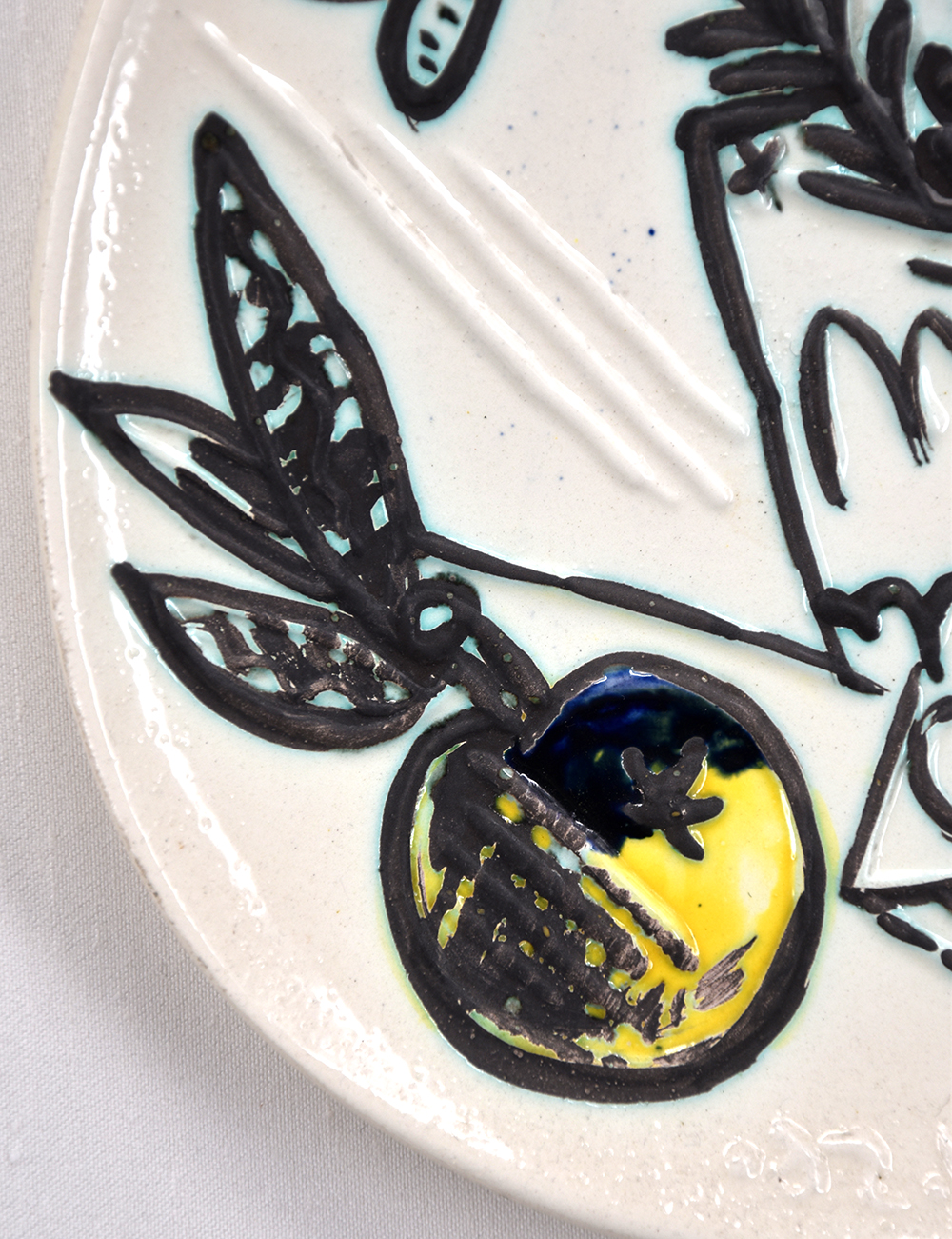 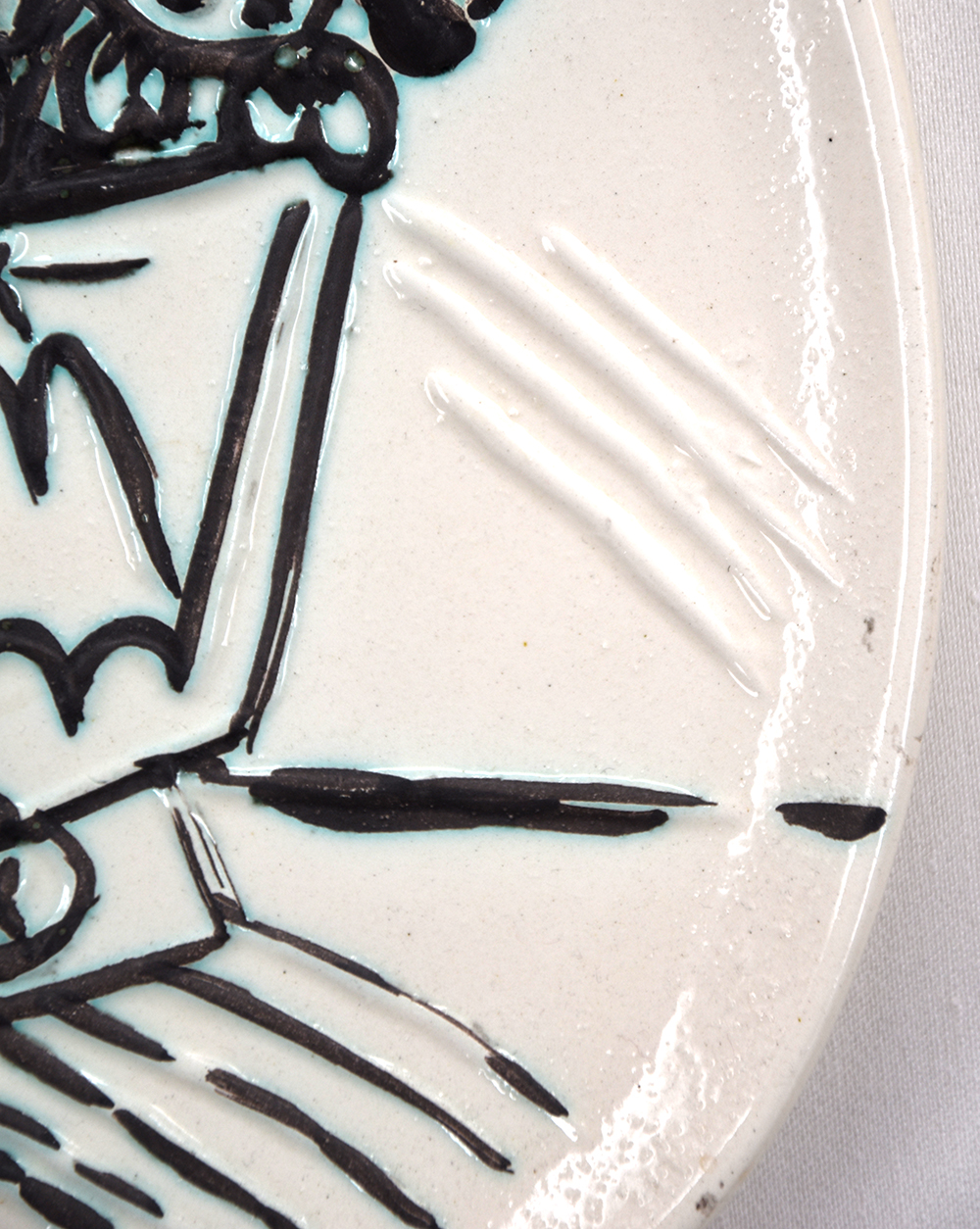 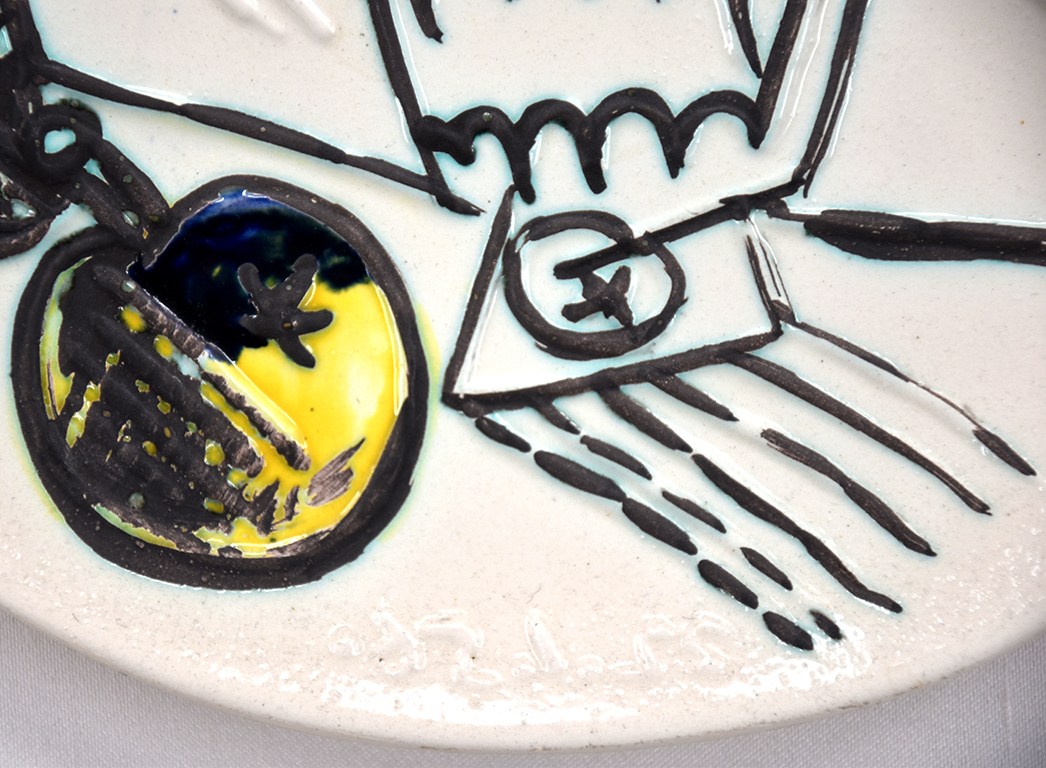 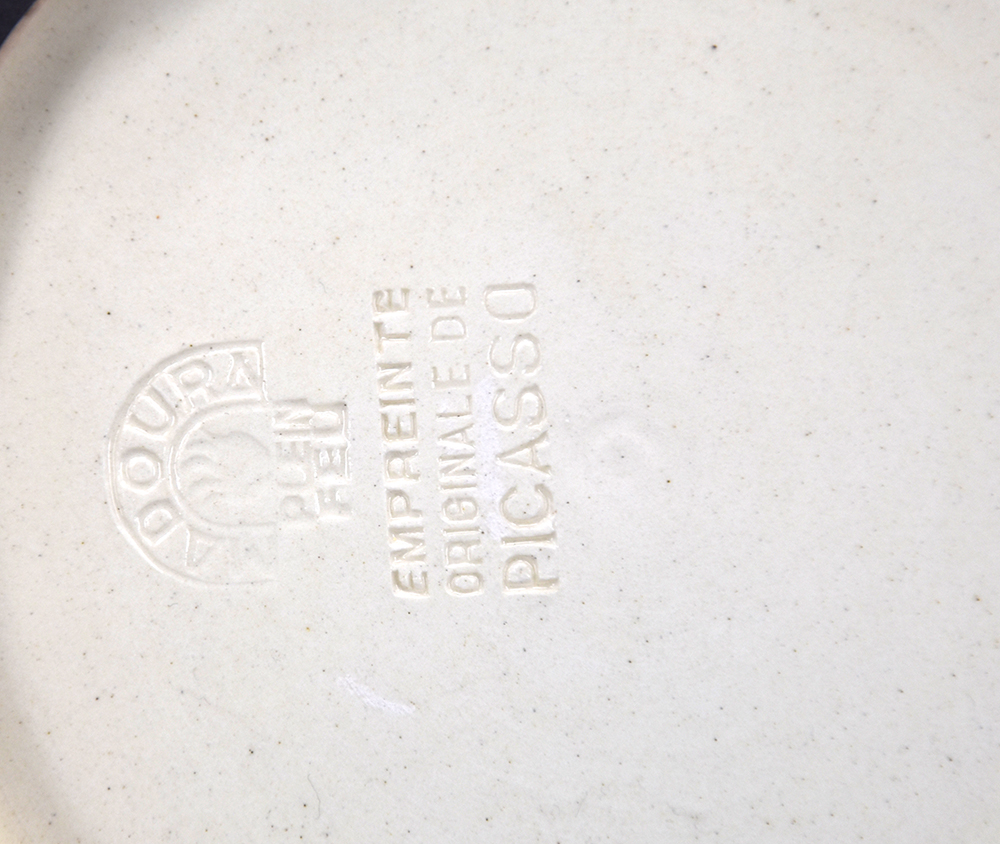 Pablo Picasso ceramic Bouquet à la pomme (Bunch with Apple), 1956 A.R. 307  features Picasso’s playful and dramatic rendition of color, slightly tinting the bunch of flowers in a deep green, while accenting the small apple in the lower left with a vibrant yellow.  The impression is further complimented by dark outlines of the image, both on the flowers within its decorative pot and the apple on a small branch with leaves. Picasso has created context for this scene by giving a ground line (which is presumably the table upon which the flowers and apple rest). In addition to this, the vase of flowers casts a shadow to its lower right portrayed by broken lines that extend out from the base. The positioning of the shadow gives the viewer an intuitive idea of where light is coming from. This exquisite Picasso ceramic Bunch with Apple seems to glow with his skilled coloring techniques as subtle hues of turquoise and yellow allow for an organic effect that gives the medium a rich texture. Such rich vivacity is unseen elsewhere in his ceramic still life’s.

Created on January 22, 1956, Bunch with Apple (Bouquet à la pomme), 1956 A.R. 307 is a Madoura round/square plate of white earthenware clay with decoration accentuated with oxidized paraffin and oxides (ivory, brown, green, yellow) under glaze from the edition of 400. This work is stamped with the ‘MADOURA PLEIN FEU’ and ‘EMPREINTE ORIGINALE DE PICASSO’ pottery stamps on the reverse.

Catalogue Raisonné & COA:
Pablo Picasso ceramic Bunch with Apple (Bouquet à la pomme), 1956 A.R. 307 is fully documented and referenced in the below catalogue raisonnés and texts (copies will be enclosed as added documentation with the invoices accompanying the sale of the work):

1. Ramié, Alain. Picasso Catalogue of the edited ceramic works 1947-1971. Madoura: Galerie Madoura, 1988. Listed and illustrated as catalogue raisonné no. 307 on pg. 157.
2. A Certificate of Authenticity will accompany this work.