Ambroise Vollard was born in 1867 in the French colony of Réunion, an island in the Indian Ocean. At age 19 he was sent to study law in Montpellier, France, and from there moved on to Paris at age 21. 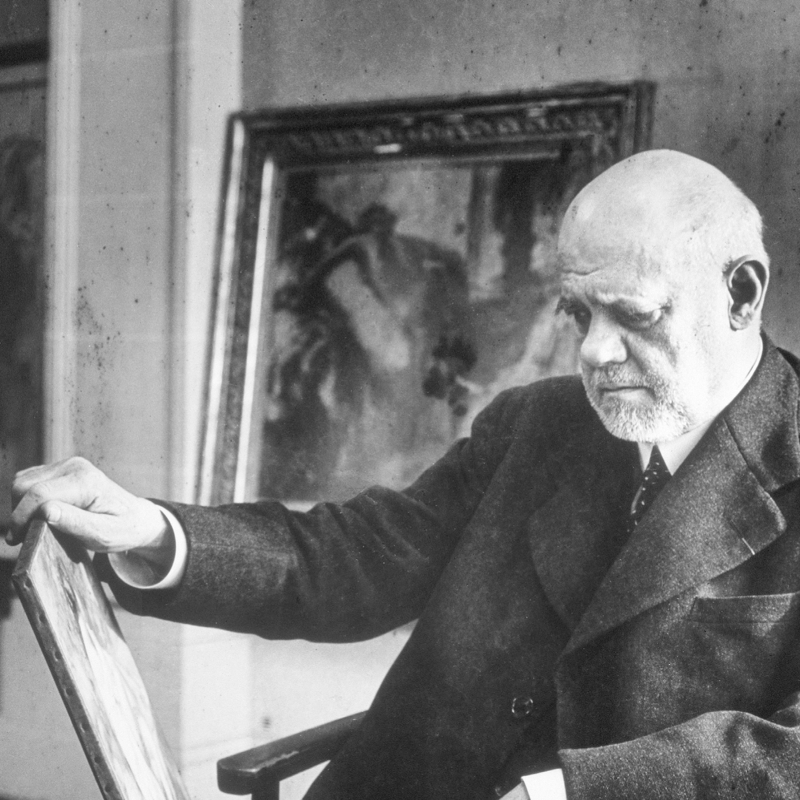 Ambroise Vollard was born in 1867 in the French colony of Réunion, an island in the Indian Ocean. At age 19 he was sent to study law in Montpellier, France, and from there moved on to Paris at age 21. With the little money he had, he began to amass a small collection of art as a side interest to his study of the law. He would dig through prints that were being sold on the banks of the Seine. Soon his passion for art exceeded his desire to be a lawyer, and he left law school to become a fully-fledged art dealer. His first gallery opened in 1893 at 39 rue Lafitte, in Paris. In 1894 he moved to a better space just up the street at 6 rue Lafitte. He was immediately interested in the somewhat unknown and unappreciated Impressionist artists that had been shunned by the Academy. He was fond of Paul Cézanne’s work in particular. In 1895, he held the first solo public exhibition of Cézanne’s work. This exhibit made Cézanne known in Paris and increased the worth of the before little-known French painter. Vollard’s collection of Cézanne’s art also inspired a young Picasso – who was taken with the painter.

Vollard was unique in that he encouraged many of his artists to venture into printmaking – he called them painter-printmakers. He commissioned illustrated books and portfolios from many of them, starting with Pierre Bonnard. In 1896 Vollard published an album called Les Peintres-Graveurs which had an accompanying exhibition. This album included the works of the greats such as Cézanne, Gauguin, and Marc Chagall, among more. The next year, in 1897, he published L’Album d’estampes originales de la Galerie Vollard which included works from Toulouse-Lautrec, Pissarro, Cézanne, Rodin, and more.Vollard maintained relationships with many well-known artists of his day – including Degas, Pissarro, and Renoir. Both Degas and Renoir attended his first public exhibition. Degas and Pissarro had a continued interest in his career, but never wanted to be employed by him. Degas would on occasion trade pastels and drawings for works by some of Vollard’s artist such as Cézanne and Gauguin. Renoir, on the other hand, had a very lasting and strong friendship with the art dealer. Renoir had another primary art dealer, but allowed Vollard to sell some of his minor works. Many artists painted Vollard, as did Renoir, but it was his Vollard as Toreador that Vollard treasured and never sold.Vollard had influential early shows for other famous masters as well, including a posthumous show of Vincent van Gogh. In 1901, Vollard held a solo show for Pablo Picasso which Vollard did not consider successful, as pieces only sold for quite low prices. Vollard did not offer to buy the remaining pieces.  This was the start of a fruitful professional relationship between the dealer and artist, but Vollard never ended up consenting to be Picasso’s primary art dealer, though Picasso inquired. Despite the perceived lack of success of his first Picasso showing, Vollard bought more pieces from the artists’ Rose and Blue periods, after Leo and Gertrude Stein began collecting his work. Vollard commissioned a few albums from Picasso, including the very famous Vollard Suite, and the wide recognition that Picasso gained from the reach of these books helped to cement his fame.

The end of his career was taken up with the publishing of illustrated books. One of his first was the famous Daphnis and Chloe, a Greek love story, and was illustrated by Bonnard. Vollard was also author of manuscripts on Renoir and Cézanne. World War I, Vollard, now a wealthy man, continued to run an art gallery from his home. He died in 1939 unexpectedly and without an heir, and as a result his art was dispersed and distributed to a multitude of places – not all of them known.