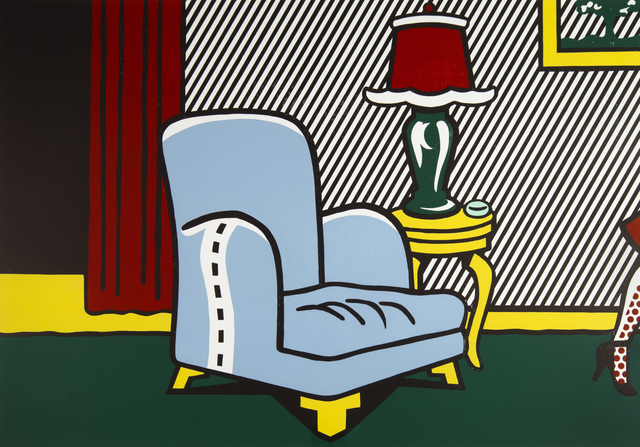 Named after the French word for “exit,” Roy Lichtenstein La Sortie, 1990 is more than just a depiction of an interior space; certain pictorial details coupled with the title carry implications of movement and narrative. For instance, the four lines on the seat of the armchair indicate the leftover impression of the armchair’s recent occupant, who is visible on the far right edge of the work as a cropped leg wearing a high heeled shoe. Solid colors and bold lines define the furniture and details of the room in Lichtenstein’s signature cartooned style, creating a clearly defined space that makes the exiting figure to the right more inconspicuous. The pops of red in the curtain, lamp shade, the edge of skirt or dress above the leg, and the Ben Day dots on the leg itself are strategically placed throughout the image to create a visually cohesive composition. Roy Lichtenstein La Sortie, 1990 stands out as a unique work from the Interior series because it is the only image in the series not based on a photograph from an advertisement.

Created in 1990, Roy Lichtenstein La Sortie, 1990 is a woodcut on 4-ply Paper Technologies, Inc., Museum Board. This work is hand signed and dated by Roy Lichtenstein (New York, 1923 – New York, 1997) in pencil in the lower right and numbered from the edition of 60 with a blind stamp in the lower right (copyright symbol, publication date, artist’s initials, and Gemini G.E.L. chop). This work is also stamped on verso in the lower left (published by Gemini G.E.L., Los Angeles) and has the workshop number in pencil in the lower left beneath the stamp on verso: (RL90-1221).

Catalogue Raisonné & COA:
Roy Lichtenstein La Sortie, 1990 is fully documented and referenced in the below catalogue raisonnés and texts (copies will be enclosed as added documentation with the invoices that will accompany the sale of the work).

1. Corlett, Mary Lee. The Prints of Roy Lichtenstein: A Catalogue Raisonné 1948-1997. New York: Hudson Hills Press, 2002. Listed and illustrated as catalogue raisonne no. 248.
2. A Certificate of Authenticity will accompany this artwork.

About the Framing:
Framed to museum-grade, conservation standards, Roy Lichtenstein La Sortie, 1990 is presented in a complementary moulding and finished with silk-wrapped mats and optical grade Plexiglas.