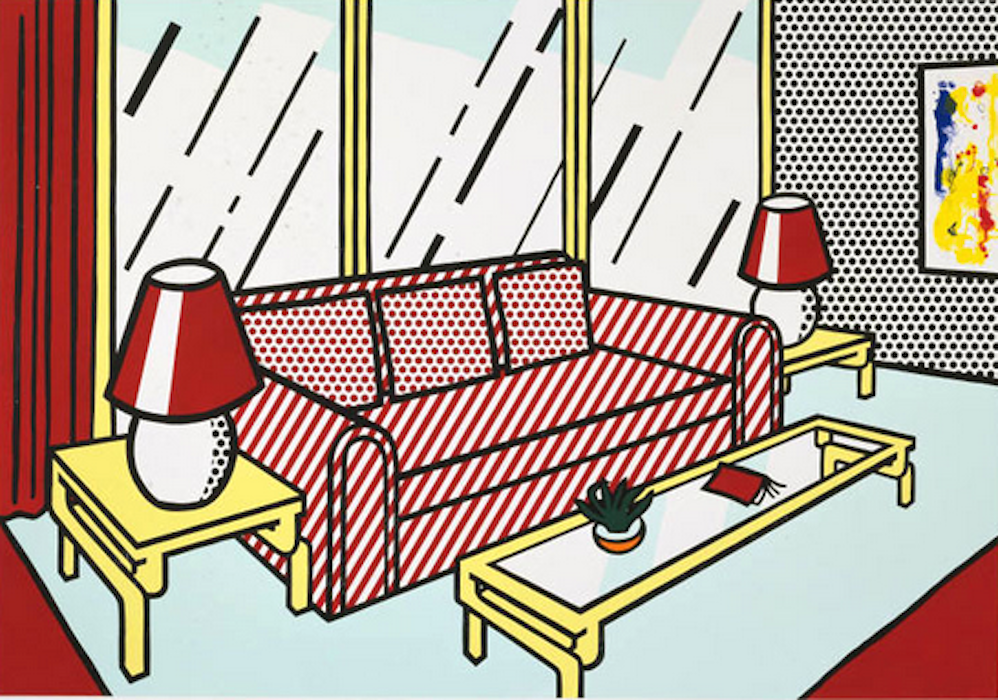 Roy Lichtenstein Red Lamps, 1990 depicts living room space through Lichtenstein’s signature cartooned style of bold lines and colors. Without the effects of shading, it remains unclear whether or not the room is illuminated by natural light from the window to behind the couch or by the two red lamps after which this work is titled. Since the source of light in this image remains ambiguous, the main focus becomes the patterns and lines that make up the individual forms in the space. The couch is angled backwards towards the upper right corner of the image, but the red stripes that fill it conflict with the angled perspective because they lie flat along the surface of the picture plane. Such tension between depth and flatness is what makes such works by Lichtenstein such dynamic visualizations despite the commonplace subject matter. The composition of Roy Lichtenstein Red Lamps, 1990 was inspired by an advertisement photograph that Lichtenstein enlarged, traced, and reworked into the final image seen here.

Created in 1990, Roy Lichtenstein Red Lamps, 1990 is a lithograph, woodcut, and screenprint on 4-ply Paper Technologies, Inc., Museum Board. This work is hand signed and dated by Roy Lichtenstein (New York, 1923 – New York, 1997) in pencil in the lower right and numbered from the edition of 60 with a blind stamp in the lower right (copyright symbol, publication date, artist’s initials, and Gemini G.E.L. chop). This work is also stamped on verso in the lower left (published by Gemini G.E.L., Los Angeles) and has the workshop number in pencil in the lower left beneath the stamp on verso: (RL90-1224).

Catalogue Raisonné & COA:
Roy Lichtenstein Red Lamps, 1990 is fully documented and referenced in the below catalogue raisonnés and texts (copies will be enclosed as added documentation with the invoices that will accompany the sale of the work).

1. Corlett, Mary Lee. The Prints of Roy Lichtenstein: A Catalogue Raisonné 1948-1997. New York: Hudson Hills Press, 2002. Listed and illustrated as catalogue raisonne no. 251.
2. A Certificate of Authenticity will accompany this artwork.

About the Framing:
Framed to museum-grade, conservation standards, Roy Lichtenstein Red Lamps, 1990 is presented in a complementary moulding and finished with silk-wrapped mats and optical grade Plexiglas.