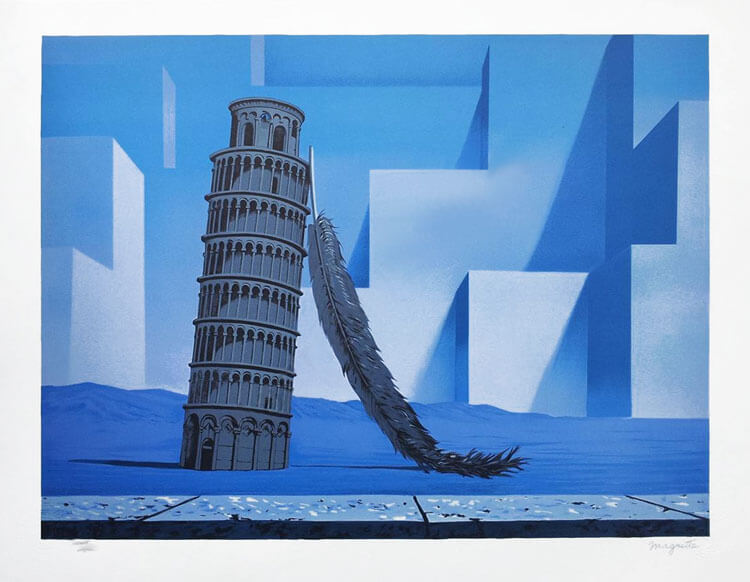 René Magritte Memory of a Journey (Souvenir de voyage) is a dreamy image filled with mystery and surreal depictions of space and light. The influential Belgian surrealist creates a blue background of geometric forms which support the central image of the tower. Also in the background are a series of mountains. The image of the Leaning Tower of Pisa supported by a giant feather brings to mind several associations. The feather’s delicate nature is enhanced by the detailing of its texture and its subtle shading. The solid form of the tower truly juxtaposes the feather’s frailty. It suggests the powerful magnetism of iconic monuments from cultures long gone and the impermanence of these constructions. The Tower is a perfect example, since it has long stood in this suspended state on the brink of collapse. Like our brief snapshots taken on vacation, Magritte's composition is both arbitrary and poignant. The great blue sky hovering overhead chimes that change is imminent. Broken up into great blocks, the expansive sky is reduced to large stepped forms that might be a staircase and that, knowing Magritte, lead nowhere. This temporary pause in motion and implied stillness is a major aspect of Magritte’s work.

Catalogue Raisonné & COA:
René Magritte Memory of a Journey (Souvenir de voyage) is fully documented and referenced in the below catalogue raisonnés and texts (copies will be enclosed as added documentation with the invoice accompanying the sale of the work).

About the Framing:
Framed to museum-grade conservation standards, René Magritte Memory of a Journey (Souevnir de Voyage) is presented in a modern moulding with silk-wrapped mats and optical-grade Plexiglas.