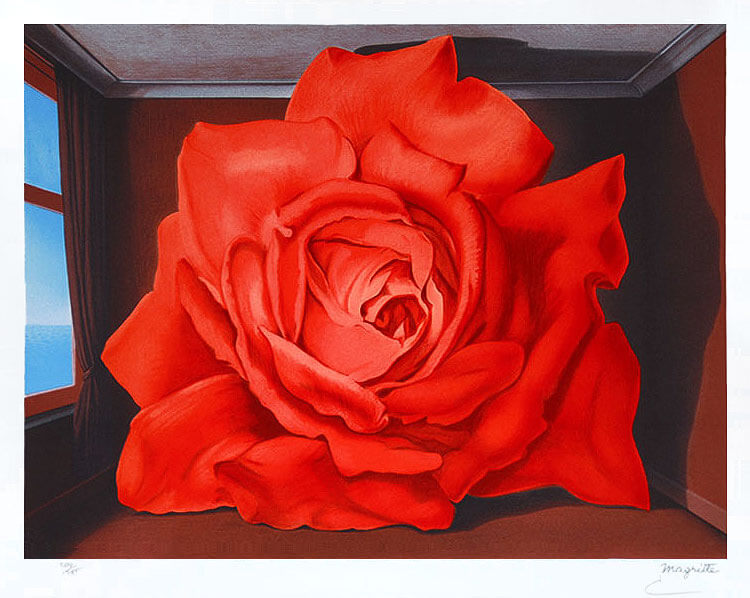 René Magritte Le tombeau des lutteurs (The tomb of the wrestlers) portrays a gorgeous scene in which the beautiful rose seems to overtake the room and capture the viewers complete attention to the point where the details of the room and the snowy landscape outside are overlooked.

The inspiration for the work originated from a conversation Magritte had with Harry Torczyner, a New York lawyer and poet, in 1960 surrounding the Soviet Union's 'tachiste' painters. Tachisim is a French style of abstract painting that is similar to surrealism, but a style that Magritte was not comfortable with. He said to Torczyner, "They paint white on white, and they believe that this is an achievement" (Whitfield, 1992).

In response to Magritte's dismissal, Torczyner challenged him to paint, "a white rose, in a white room with a window looking on to a landscape covered with snow" (Whitfield, 1992). The work you see before you is what Magritte produced, with as minimal white as possible. So why did Magritte choose to alter the challenge? Well painting the rose a 'revolutionary' red instead of white was his idea of recognizing Torczyner's trip to the Soviet Union, and the Red October that allowed for the Bolsheviks to govern Russia, and were then, in the 1960's, altering course after the death of Stalin. Thereby making this work a rather telling portrait of Magritte's sentiments at the time.

Created after the original 1960 oil painting Le tombeau des lutteurs (The tomb of the wrestlers) by René Magritte (1898-1967), this color lithograph was published and printed by Philippe Moreno, Paris in 2003. This work is signed ‘Magritte’ in fascimile in graphite color in the lower right margin and signed in pencil in the lower left margin by the representative of ADAGP representing the Magritte Succession, Mr. Charly Hersovici. Numbered from the edition of 275 in pencil in the lower left margin.

Catalogue Raisonné & COA:
René Magritte The Tomb of the Wrestlers (Le tombeau des lutteurs) is fully documented and referenced in the below catalogue raisonnés and texts (copies will be enclosed as added documentation with the invoice that will accompany the final sale of the work).

1. Whitfield, Sarah. Magritte. London: The South Bank Center, 1992. The original oil painting is illustrated and discussed as no. 119.
2. Meuris, Jacques. Magritte. London: Greenwich Editions, 1988. The original oil painting is listed as no. 238 and is illustrated on pg. 161 with a discussion on pg. 160.
3. A Certificate of Authenticity will accompany this work.

About the Framing:
Framed to museum-grade conservation standards, René Magritte The Tomb of the Wrestlers (Le tombeau des lutteurs)  is presented in a modern moulding with silk-wrapped mats and optical-grade Plexiglas.