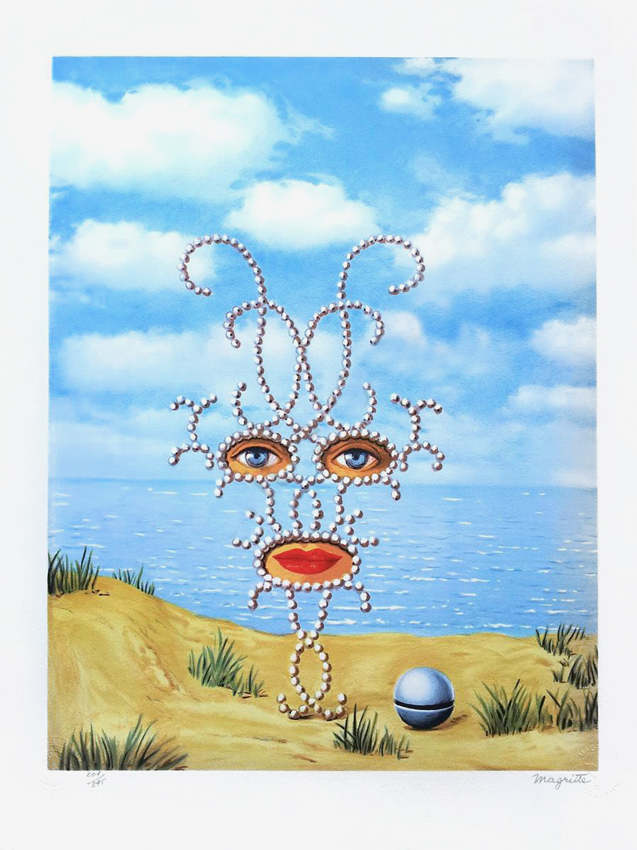 René Magritte Shéhérazade is symbolic of wealth, exoticism and even eroticism. The face that appears before us is feminine and sensual, making it appear as if we are staring at a veiled woman from a mythical harem. This is intentional as the work pays tribute to The Arabian Nights. The mythical Shéhérazade captured the attention and eventually heart of Shahryar with her stories. Betrayed by his first wife, the king took a new lover every night, only to have her beheaded in the morning. Offering herself up to the king, Sheherazade wove such a wondrous tale that her life was spared, so she might continue the following night. Magritte focuses our attention on her eyes and red mouth, the location of all her power. With her features suspended in a delicate veil of diamonds, this compelling figure becomes a visual reminder of the veils draped over the truth of things. To know what is real, we must look beyond external clutter.

Catalogue Raisonné & COA:
René Magritte Shéhérazade is fully documented and referenced in the below catalogue raisonnés and texts (copies will be enclosed as added documentation with the invoice that will accompany the final sale of the work).

1. Meuris, Jacques. Magritte. London: Greenwich Editions, 1988. The original oil painting is listed and discussed as no. 145.
2. A Certificate of Authenticity will accompany this work.

About the Framing:
Framed to museum-grade conservation standards, René Magritte Shéhérazade is presented in a modern moulding with silk-wrapped mats and optical-grade Plexiglas.