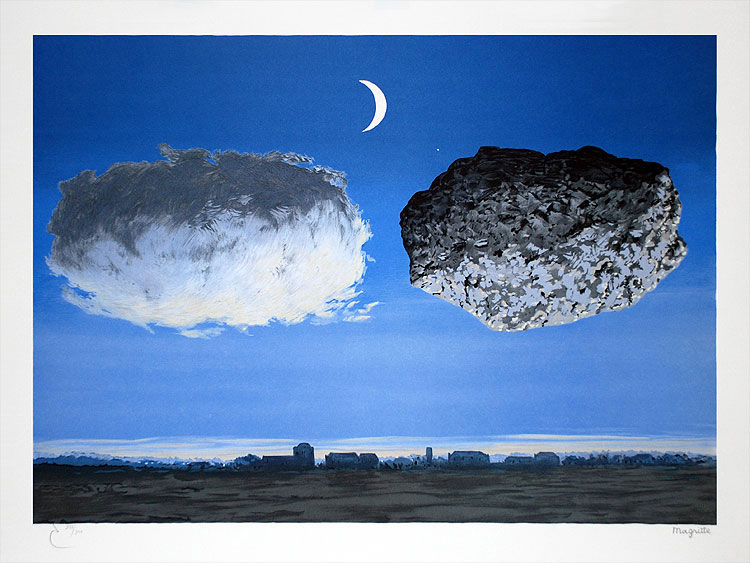 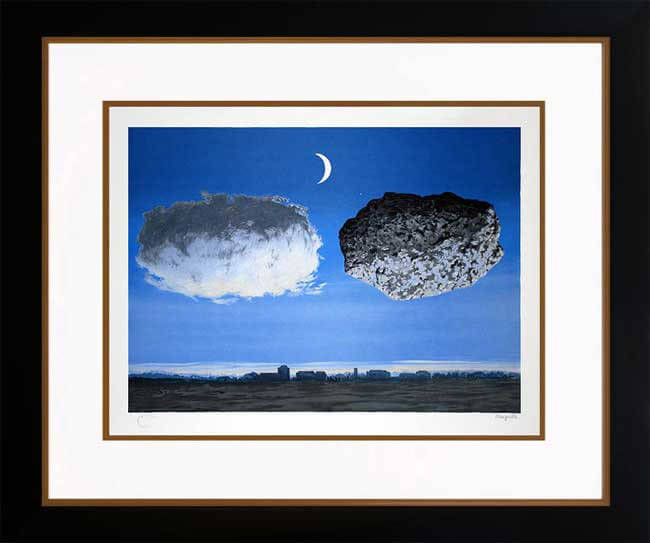 In a showdown between two seemingly opposite forms, a large cloud and an equally large stone face each other, floating in the sky above a serene landscape. The viewer cannot help but notice the disconcerting nature of this work; the giant stone appears as weightless as the cloud, yet stone is notably heavy and typically anchored to the ground. Of works such as this (that convey the "world of stone") Meuris states, "Gravity is necessarily succeeded by weightlessness. And with Magritte the process is quite independent of the law of physics…Actually, all things considered, the problem of weightlessness has more to do with the poetic than the scientific dimension. Faced with these paintings [of the "world of stone"], it is appropriate to draw on "knowledge." It is enough that, by their presence before us, they transport us into other realms in a state of total serenity, outside time.

Created after the 1964 original oil on canvas La bataille de l'argonne (The Battle of the Argonne) by René Magritte (1898-1967),  this color lithograph was published and printed by Philippe Moreno, Paris in 2003. This work is signed ‘Magritte’ in fascimile in graphite color in the lower right margin and signed in pencil in the lower left margin by the representative of ADAGP representing the Magritte Succession, Mr. Charly Hersovici. Numbered from the edition of 300 in pencil in the lower left margin.

1. Meuris, Jacques. Magritte. London: Greenwich Editions, 1988. Original 1959 gouache of this work (created prior to the 1964 oil on canvas) illustrated and discussed on page 158.
2. A Certificate of Authenticity will accompany this work.