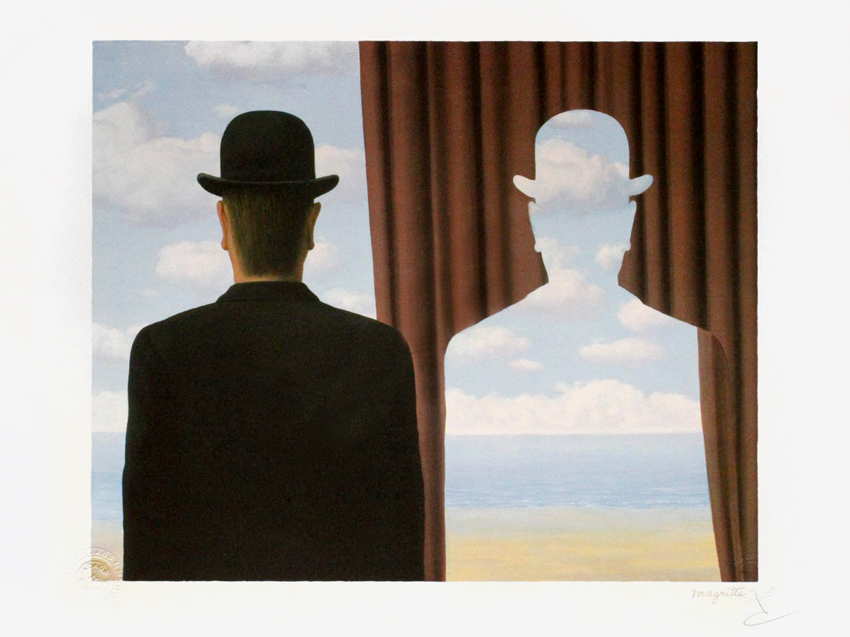 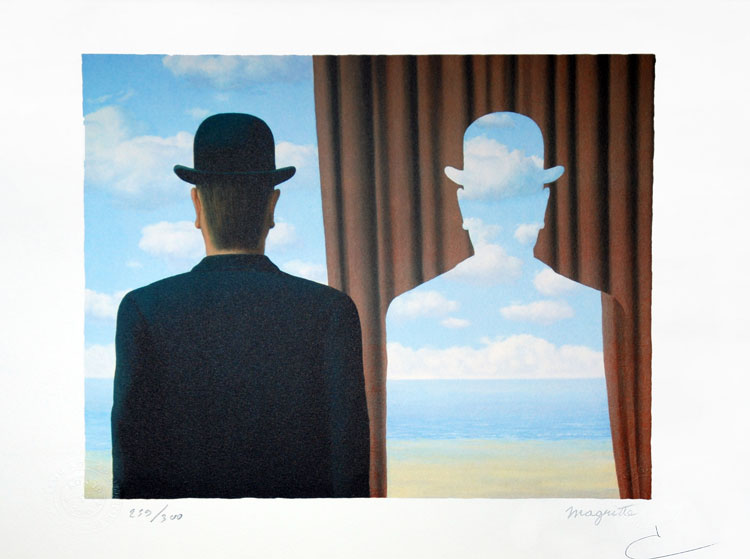 At first glance, René Magritte Décalcomanie shows a man standing next to his own silhouette. The man wearing the bowler hat is a familiar image, reappearing throughout Magritte's body of work. Both the man and his absence face away from viewer and stare out across an empty beach and flat sea against a blue sky with white clouds. The image creates an inescapable sense of stillness, as if time has stopped for this moment.The man's silhouette seems to have been cut out of the curtain hanging down over half of the composition. Closer looking actually shows that the silhouettes are not quite the same; part of the curtain is seen, slightly distorted, in the man's outline. The profile becomes a kind of lens through which the world beyond is seen. By creating this image, Magritte returned once again to the Surrealist principle of letting thought reign free, untethered by associations.

Created after the 1966 original oil on canvas Décalcomanie by René Magritte (Lessines, 1898 - Brussels, 1967), this color lithograph was published and printed by Philippe Moreno, Paris in 2010. This work is signed ‘Magritte’ in fascimile in graphite color in the lower right margin and signed in pencil in the lower left margin by the representative of ADAGP representing the Magritte Succession, Mr. Charly Hersovici; numbered from the edition of 275 in pencil in the lower left margin.

Catalogue Raisonné & COA:
René Magritte Décalcomanie is fully documented and referenced in the below catalogue raisonnés and texts (copies will be enclosed as added documentation with the invoices that will accompany the final sale of the work).

1. Gimferrer, Pere. Magritte. Barcelona: Ediciones Polígrafa, S.A., 1986. Original oil on canvas listed and illustrated as catalogue no. 134.
2. A Certificate of Authenticity will accompany this work.

About the Framing:
Framed to museum-grade conservation standards, René Magritte Décalcomanie is presented in a modern moulding with silk-wrapped mats and optical-grade Plexiglas.