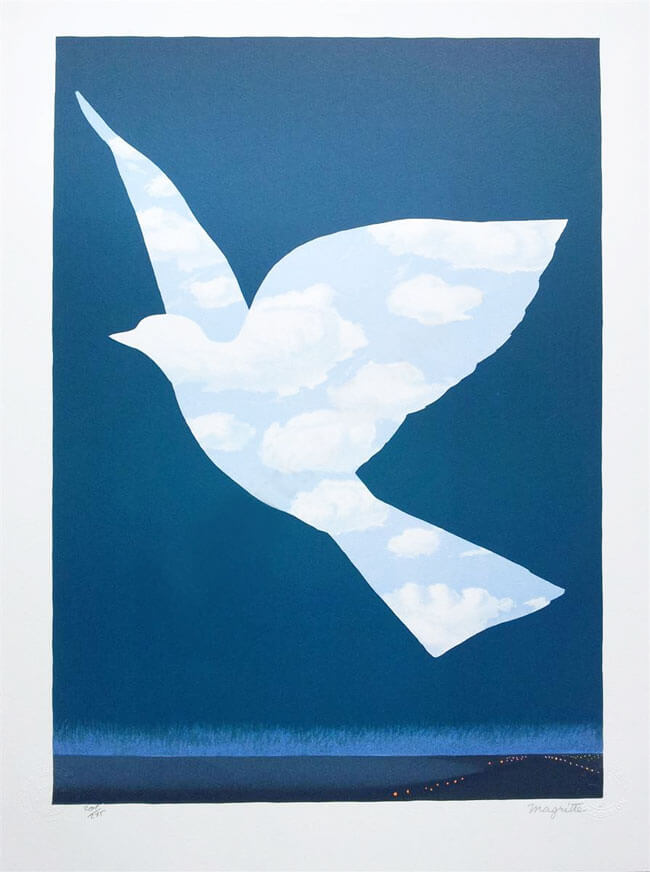 Birds filled with clouds or leaves, materials other than their natural feathers, are a common motif in Magritte's work. A version of this image served for several years as the emblem of Sabena, a well-known Belgian airline. The work's public usage points to its simple elegance and effectiveness as a visual statement. The poet Henri Michaux described, "A Bird traversing the clouds, traversed by clouds," an animal becoming one with her environment (Meuris, 170). Scholar Jacques Meuris explains the artist's re-use of images not as copying but as, "a vocabulary of images compiled for his own purposes much as we use words" (Ibid). As one of the last works created by the artist before his death in 1967, The Sky Bird is both a wonderful tribute to a life devoted to art, and a bittersweet image of an animal on the final leg of a journey.

Created after the 1966 original oil on canvas L'Oiseau de Ciel (The Sky Bird) by René Magritte (1898-1967), this original color lithograph is facsimile signed 'Magritte' in graphite color in the lower right margin, and also initialed in pencil by Charley Herscovici, President of the Fondation Magritte and of the ADAGP. It bears the ADAGP blindstamp in the lower left margin and the Magritte Succession blindstamp in the lower right margin. Numbered from the edition of 275, it is printed on Rives paper and published and printed by Philippe Moreno, Paris, 2010.

Catalogue Raisonné & COA:
This work is fully documented and referenced in the below catalogue raisonnés and texts (copies will be enclosed as added documentation with the invoice that will accompany the final sale of the work).

2. Whitfield, Sarah. Magritte. London: The South Bank Center, 1992. The original oil painting is illustrated and discussed as no. 123.