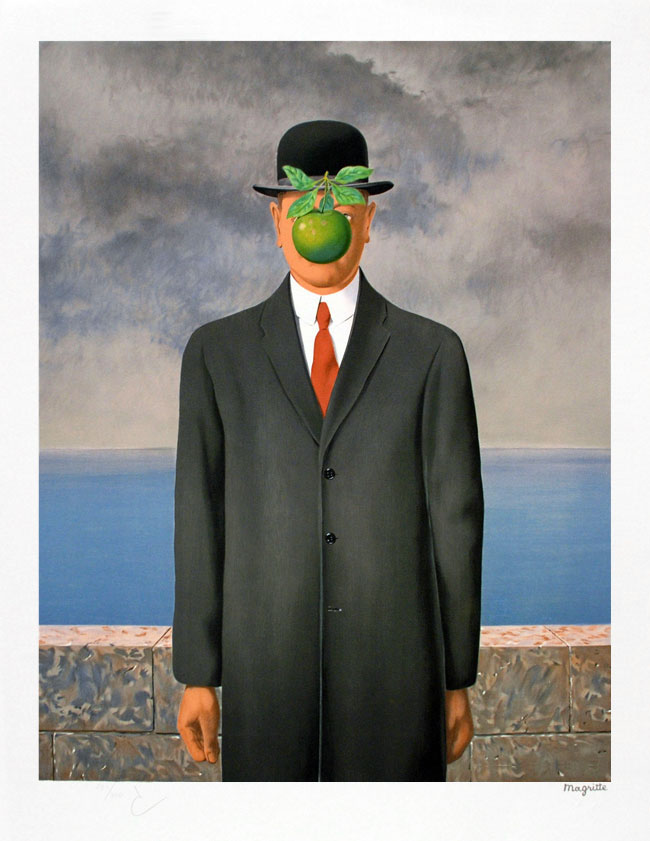 René Magritte Le fils de l'homme (The Son of Man) was initially intended as a portrait of friend Harry Torczyner, but evolved to hide (or reveal) the nature of Torczyner’s true identity.  The apple, conveniently located over the man in the bowler cap’s face, denies the viewer a glimpse at his true identity.  Of this work Magritte states, “I paint only the visible.  It would be wrong therefore to look for the invisible…In it you can see a man with a face, which is something visible.  You can also see an apple which is itself visible.  However, there comes a time when one visible thing prevents you from seeing another’ (Whitman, no. 124). Whitman also points out Magritte’s concern with the title, which he felt might be interpreted as having theological undertones.  Magritte scholar David Sylvester comments, “While Magritte constantly expressed abhorrence of any symbolic interpretation of his images, the fact is that the objects he chose to attach to the bowler-hatted men are often irredeemably symbolic objects.  The son of man has the symbol of the Fall before his eyes” (Whitman, no. 124).

Created after the 1946 original oil on canvas Le fils de l'homme (The Son of Man) by René Magritte by René Magritte (Lessines, 1898 - Brussels, 1967), this color lithograph was published and printed by Philippe Moreno, Paris in 2003. This work is signed ‘Magritte’ in fascimile in graphite color in the lower right margin and signed in pencil in the lower left margin by the representative of ADAGP representing the Magritte Succession, Mr. Charly Hersovici. Numbered from the edition of 275 in pencil in the lower left margin.

Catalogue Raisonné & COA:
René Magritte The Son of Man (Le fils de l’homme) is fully documented and referenced in the below catalogue raisonnés and texts (copies will be enclosed as added documentation with the invoice that will accompany the final sale of the work).

1. Meuris, Jacques. Magritte. London: Greenwich Editions, 1988. The original oil painting is listed and discussed as no. 124.
2. A Certificate of Authenticity will accompany this work.

About the Framing:
Framed to museum-grade conservation standards, René Magritte The Son of Man (Le fils de l’homme) is presented in a modern moulding with silk-wrapped mats and optical-grade Plexiglas.