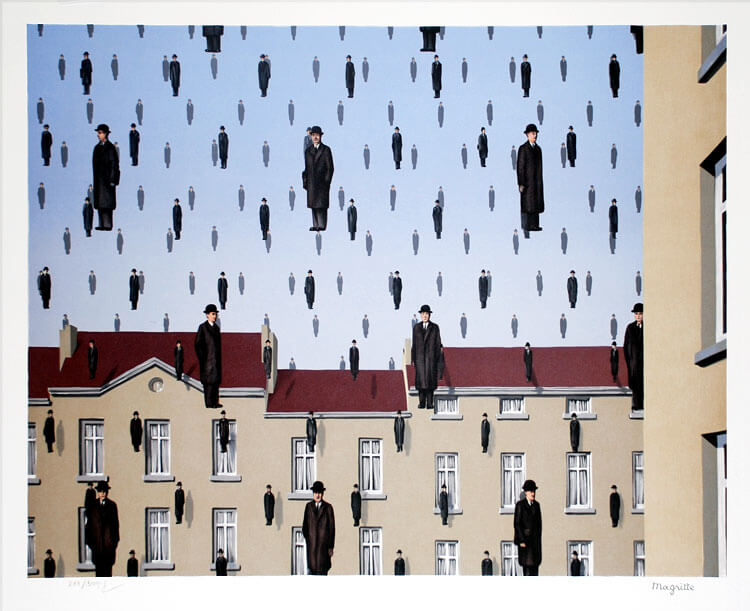 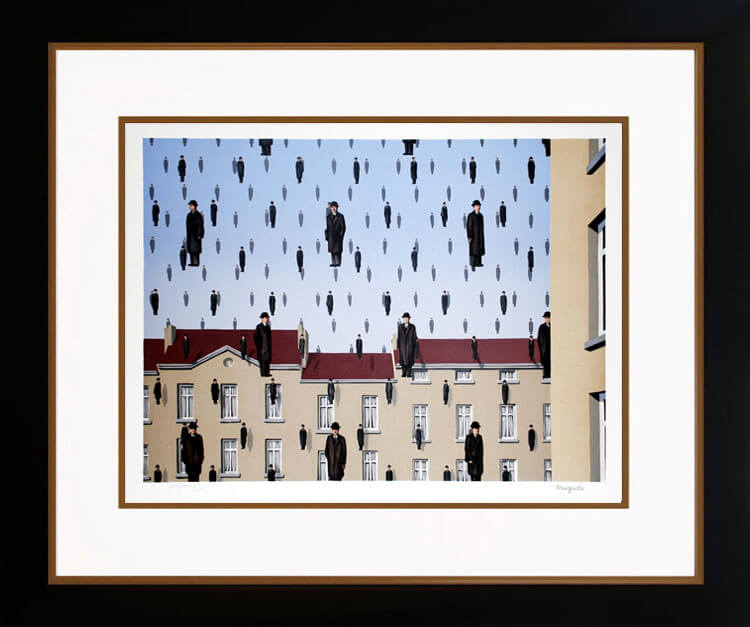 Of this work Whitfield states, "The figures are arranged in diagonal patterns as strictly spaced as the repeated pattern of a wallpaper design. The quiet rhythm made by the vertical forms brings to mind the motionless figures in the highly formalized compositions of Seurat…But whereas Seurat wanted his figures to move about 'as if they were on the Parthenon frieze,' Magritte allows his figures no occupation, no purpose, and in spite of their rigid formation, no fixed point. They could be moving up or down or not moving at all and even the light, which at first seems so reassuringly bright, turns out to be as unnaturally uniform as the bowler hats and overcoats" (no. 112).

Created after the 1953 original oil on Golconde (Golconda) by René Magritte (1898-1967), this original color lithograph was published and printed by Philippe Moreno, Paris in 2003. This work is signed 'Magritte' in facsimile in graphite color in the lower right margin and signed in pencil in the lower left margin by the representative of ADAGP representing the Magritte Succession, Mr. Charly Herscovici. Numbered 246/300 in pencil in the lower left margin (from the total edition of 360, 300 examples numbered 1-300, 45 artist's proofs numbered 1-45, and 15 copies reserved for the Succession Magritte), this work is stamped with the ADAGP blindstamp in the lower left margin and the Succession Magritte blindstamp in the lower right margin. On the back of this work is an extensive block of printed text stating the title, provenance, tirage, and details of the original oil on canvas.
DOCUMENTED AND ILLUSTRATED IN:
1. Whitfield, Sarah. Magritte. London: The South Bank Centre, 1992. Original 1964 oil on canvas illustrated and discussed as no. 112.