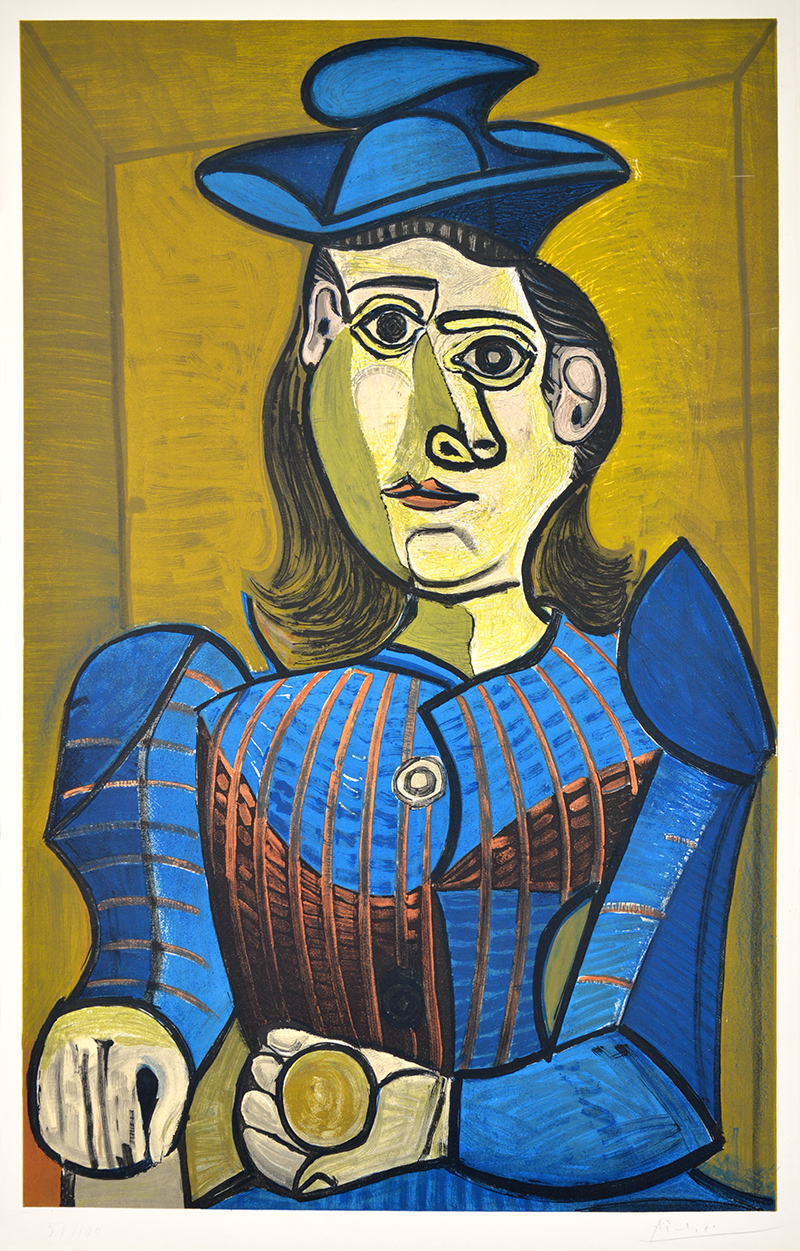 In Pablo Picasso Femme assise (Dora Maar), 1955, we are presented with an intriguing half-length portrait of Picasso’s companion and muse, Dora Maar. Dressed in a beautifully hued navy ensemble, she sits looking out at the viewer, her outlined form filling in and dominating the space. We seem to be viewing her from multiple angles and moments at once. She is looking directly at us, then suddenly it seems as if her sharp red lips are shifting as she turns away and reveals the conch of her ear, and then turns back and light breaks sharply on her cheekbone. She is posing still for us and yet her static image is continuously suggesting movement, and we see her through the magical filter of Picasso’s eyes. She holds in her hand a yellow fruit, the shape of which is echoed in the single gold button upon her dress, and further supported by the ochre walls behind her. The rich blue of her structured hat and suit stands out in sharp contrast with the tightly-structured space she resides in. A paradigm of Cubist mastery, this enthralling portrait is as beautiful as it is strange.

Created in 1955, Pablo Picasso Femme assise (Dora Maar) is a color lithograph on Rives BFK paper hand-signed by Pablo Picasso (Malaga, 1881 – Mougins, 1973) in pencil in the lower right margin and numbered from the edition of 100 in pencil in the lower left margin. Published by the Musée des Arts Decoratifs, Paris, printed by Mourlot, Paris, this work is created after the original oil on canvas entitled Woman’s Face (Dora Maar), painted by Picasso in 1944

Catalogue Raisonné & COA:
Pablo Picasso Femme Assise (Dora Maar), 1955 is fully documented and referenced in the below catalogue raisonnés and texts (copies will be enclosed as added documentation with the invoices that will accompany the sale of the work).