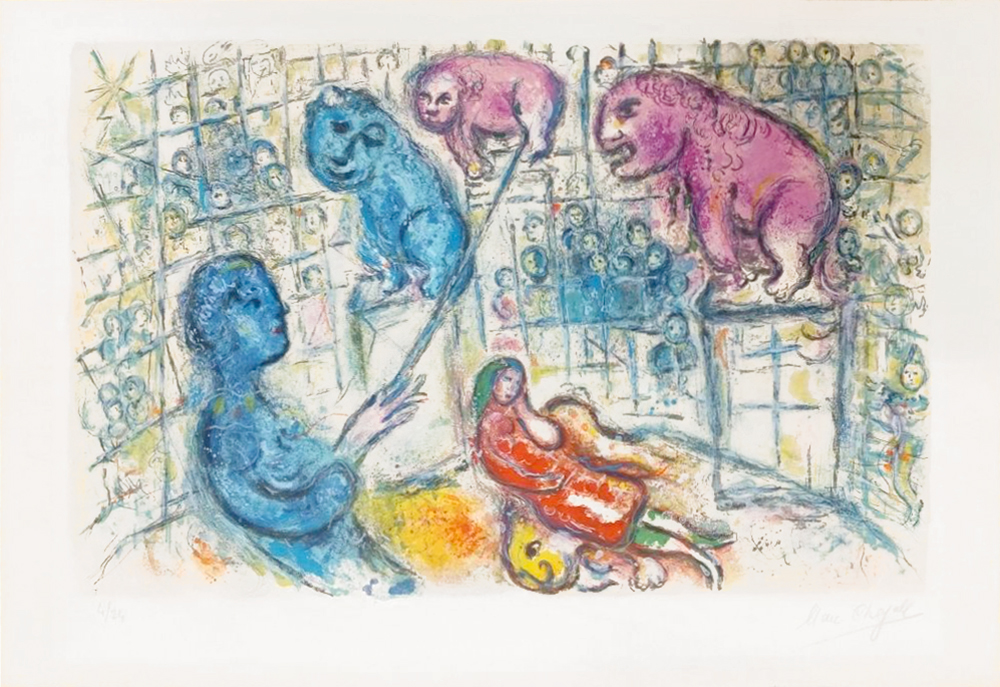 Marc Chagall’s Le Cirque (The Circus), from Cirque, 1967 is one of the eye-catching lithographs from Chagall’s Circus series. Publisher and art dealer Ambroise Vollard loved the circus and commissioned a production of circus graphics, for which Chagall executed a series of gouaches in the late 1920s. Chagall was a circus enthusiast himself, and his assistant Charles Sorlier noted Chagall’s childlike pleasure in watching the performers.  When speaking of circus performers and clowns, Chagall said, “Their colors and make-up draw me towards other psychic deformations, which I dream of painting” (Mourlot 216). When Vollard died in 1939, the artist stopped working on the project, although circus motifs frequently appeared in his work after that time. Chagall eventually started working on the series again with encouragement from Tériade, who published the thirty-eight lithographs of the series in 1967. Capturing the dynamic energy of the circus and its lively performers, this work is a masterpiece any Chagall enthusiast would admire.

Marc Chagall’s Le Cirque (The Circus), from Cirque, 1967 captures the suspense and controlled chaos of a lion taming act. The entire background is overlaid in crisscrosses that evoke the bars of a cage, placing the viewpoint of the composition from within the cage itself. Rendered in Chagall’s iconic illustrative style, three figures of lions stand at varying heights towards the top and face the figure of the lion tamer in the lower left of the image. The two right lions are pigmented with a saturated fuchsia, while the other lion is colored in a deep cerulean that matches the hue of the lion tamer. The pedestal on which the central pink lion stands blends into the lines of the cage, making the lion appear to float among the crowd of spectators. Such visual ambiguity alludes to the way the thrill and risk of circus performances transpires from performers to audience, as the spectators share the excitement of the act. The female figure lying atop a yellow lion at the base of the composition adds another element of ambiguous and unresolved action. The rich and varied visual impact of Marc Chagall’s Le Cirque (The Circus), from Cirque, 1967 explores not only the danger of lion taming but, more broadly, the risk involved in circus entertainment.

Created in 1967, Marc Chagall’s Le Cirque (The Circus), from Cirque, 1967 is a color lithograph on Arches paper. This work is hand-signed by Marc Chagall (Vitebsk, 1887 - Saint-Paul, 1985) in pencil in the lower right margin. Numbered from the edition of 24 in the bottom left margin.

Catalogue Raisonné & COA:
Marc Chagall’s Le Cirque (The Circus), from Cirque, 1967 is fully documented and referenced in the below catalogue raisonnés and texts (copies will be enclosed as added documentation with the invoices that will accompany the sale of the work).