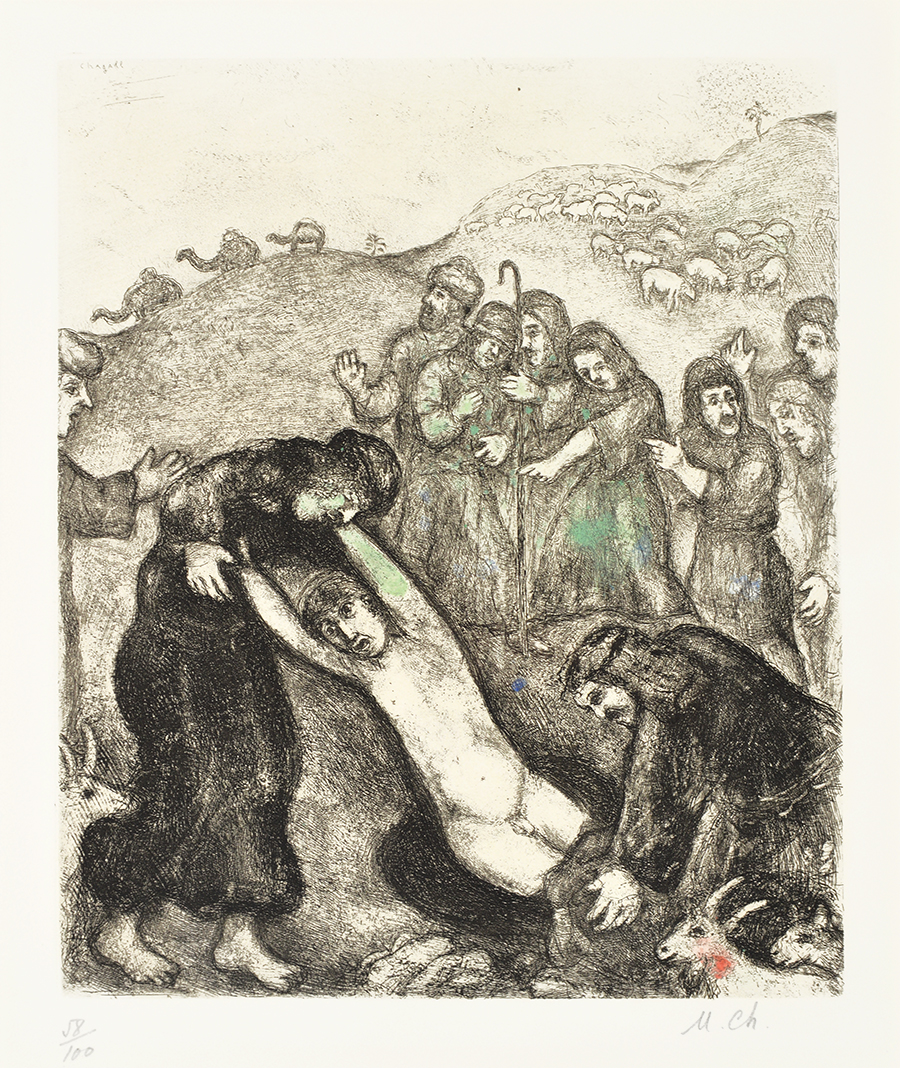 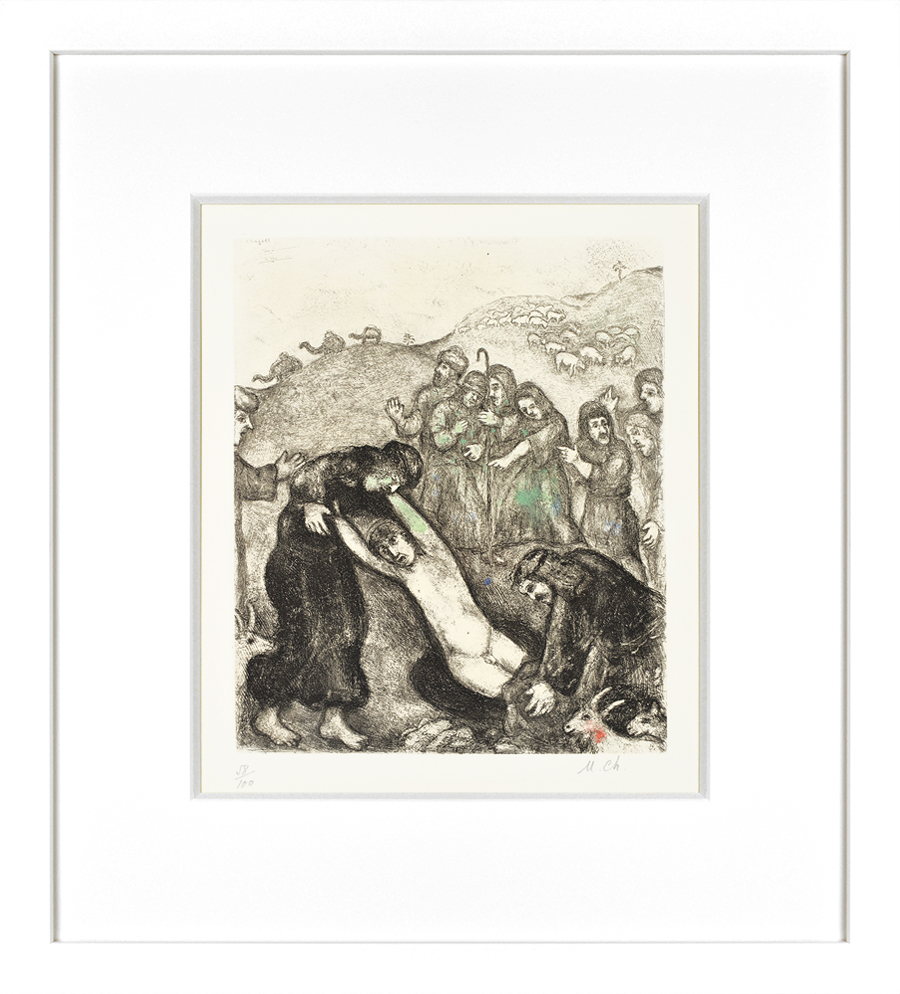 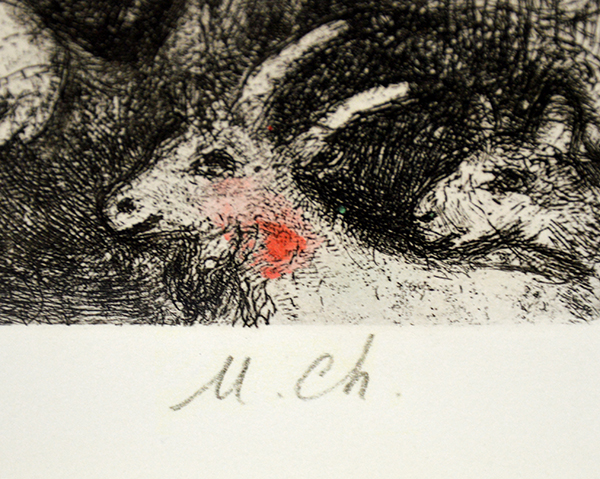 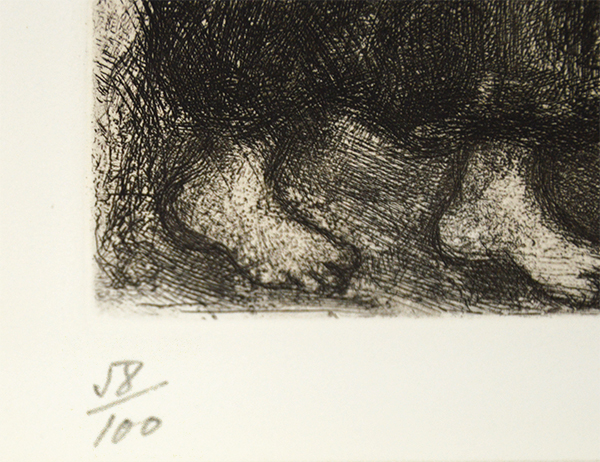 Marc Chagall Joseph and His Brothers (from the Bible Series), 1958 is an incredible work of art that conveys complex sentiments all in one pictorial frame. It is a scene of passion, tragedy, and human vulnerability that perhaps Chagall knew very well. As someone that had lived through oppression and war, Chagall brings forth powerful and beautiful spiritual scenes in the Bible Series. He depicts the scene where the prophet Joseph is being sold by his very own brothers, completely stripped of clothing and identity. Joseph’s face is clearly in agony while his brothers, holding either end of his body, show no mercy or remorse. To the right, the crowd of onlookers, perhaps shepherds, flock to see this spectacle of a scene. They mock Joseph, pointing fingers in his direction; and we as the audience feel the heightened tension.

The simplicity of the predominantly black and white etching is enhanced by the touch of pastel hues in watercolor. He paints on light strokes of sea green, blush, and purple hues to direct our attention to areas that are important. Towards the back, Chagall highlights the herd of sheep to symbolize that Joseph was God’s prophet. Working our way towards the foreground, he chooses to shade in the mob of onlookers which then points our way to Joseph and his naked body. Chagall makes it evident that Joseph’s endurance is the focal point in the entire narrative.

To draw inspiration, Chagall made it a point to visit Palestine and the Holy Land. He knew that he wanted to see, feel, and touch the very country where the prophets had lived. Such inspiration and dedication to revive the Bible Series is captured. Packed with dense messages of human tragedy and redemption, this work showcases Chagall’s abilities to weave intricate sentiments together and translate them on paper.

Created in 1958, Marc Chagall Joseph and His Brothers (from the Bible Series), 1958 is an etching with hand-applied watercolor. Hand signed by Marc Chagall (Vitebsk, 1887 – Saint-Paul, 1985) in pencil 'M. Ch.' in the lower right margin, this piece is numbered from the edition of 100 in pencil in the lower left margin; aside from the Roman numeral edition of V.

Marc Chagall Joseph and His Brothers (from the Bible Series), 1958, is fully documented and referenced in the below catalogue raisonnés and texts (copies will be enclosed as added documentation with the invoices that will accompany the final sale of the work)

Marc Chagall Joseph and His Brothers (from the Bible Series), 1958 is framed to museum-grade, conservation standards, presented in a complementary moulding and finished with linen-wrapped mats and optical grade Plexiglas.