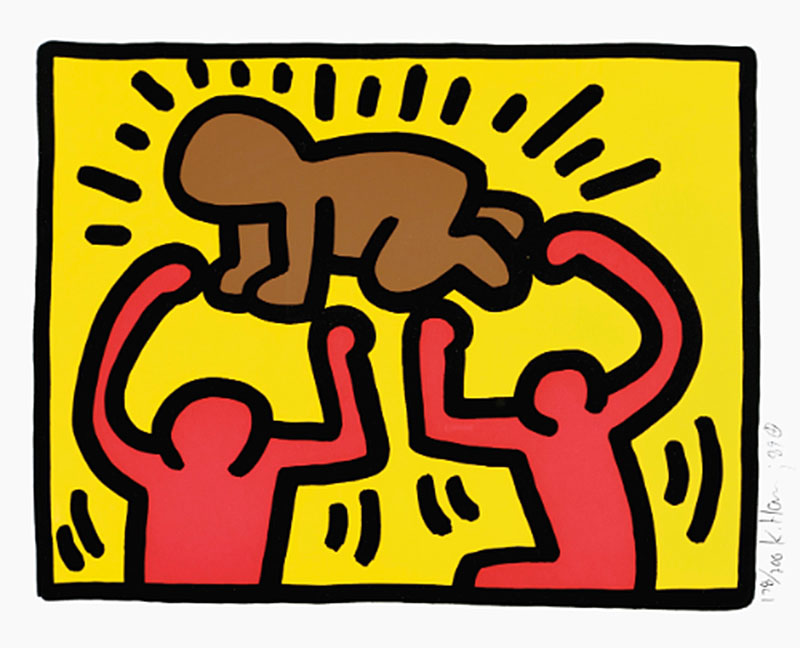 Keith Haring Pop Shop IV (Plate 2), 1989 is the second print out of four silkscreen prints in the artist’s Pop Shop IV portfolio of 1989. One of Haring’s most famous motifs, the crawling baby, is the focus of this print. Held up high by two human like figures in red, the baby is brown, an important choice by Haring, who consistently tackled issues like racial inequality and discrimination in his art. Light seems to emanate out from the baby, signified by the small black lines shooting away from the infant. This symbol is often referred to as the “radiant baby” and represents the sacredness and innocence of children, as well as refers to religion and the image of a baby Jesus.

Haring created multiple Pop Shop portfolios during the span of his career, and derived the name from his original Pop Shop that he opened in a retail space in downtown New York in 1986. This shop was opened with the intention of making the artist’s work accessible to the general public. Haring was incredibly passionate about bringing his art to the people, and he worked hard to make art more accessible to people everywhere.

Keith Haring Pop Shop IV (Plate 2), from the Pop Shop IV Portfolio, 1989 is fully documented and referenced in the below catalogue raisonnés and texts (copies will be enclosed as added documentation with the invoices that will accompany the sale of the work).