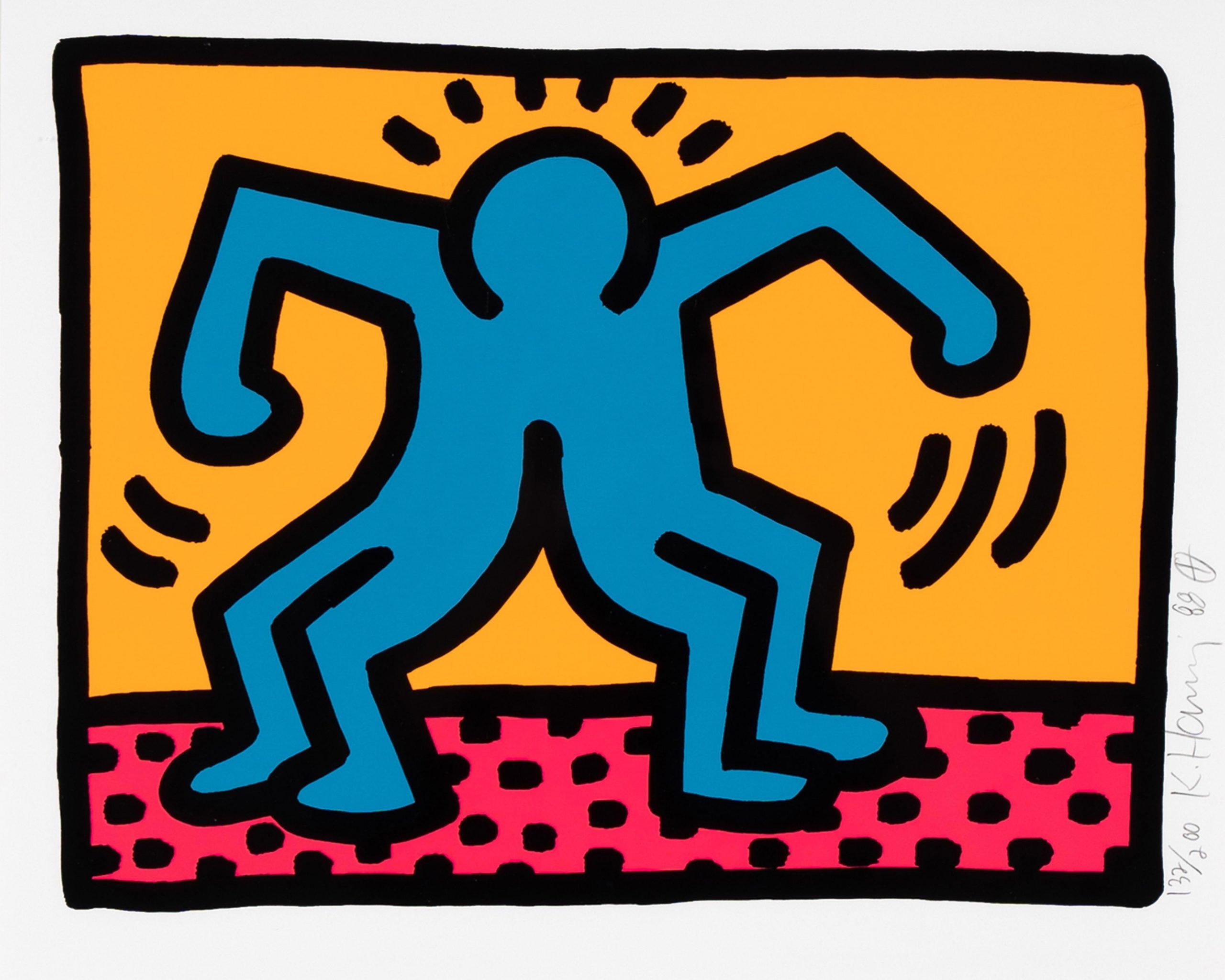 Keith Haring Pop Shop II (Plate 1) from the Pop Shop II Portfolio, 1988 is the first print in the artists Pop Shop II portfolio of 1988. The whimsical composition is centered on a singular figure that is slightly offset to the left; thick black outlines separate the humanoid figure from the background. Rendered blue, the figure has his arms spread apart to the side, gestural lines slowly beneath him indicating movement. From the neck down however, the figure splits into two separate bodies, each with a pair of their own legs that are conjoined in the middle and reach down to the bright pink floor. The left side is slouched more and seems to have a longer torso, creating a sense of depth and juxtaposition between the two figured legs, showing that even within his own works, the simplistic human nature that we’re all different still shines through. The bright monochromatic orange background causes both the blue and the pink from this work to jump out at you to be noticed. Haring often delved into pertinent social problems that were troubling the world at the time in his art. He would use his simple designs to help viewers digest his commentary and get them thinking about the world around them. Haring created multiple Pop Shop portfolios during the span of his career and derived the name from his original Pop Shop that he opened in a retail space in downtown New York in 1986. This shop was opened with the intention of making the artist’s work accessible to the general public. Today, Haring is still known as an artist who was passionate about access to art and art education.

Catalogue Raisonné & COA:
Keith Haring’s Pop Shop II (Plate 1), from the Pop Shop portfolio, 1988 is fully documented and referenced in the below catalogue raisonnés and texts (copies will be enclosed as added documentation with the invoices that will accompany the sale of the work).

About the Framing:
Framed to museum-grade, conservation standards, Keith Haring’s Pop Shop II (Plate 1), from the Pop Shop portfolio, 1988 is presented in a complementary moulding and finished with silk-wrapped mats and optical grade Plexiglas.