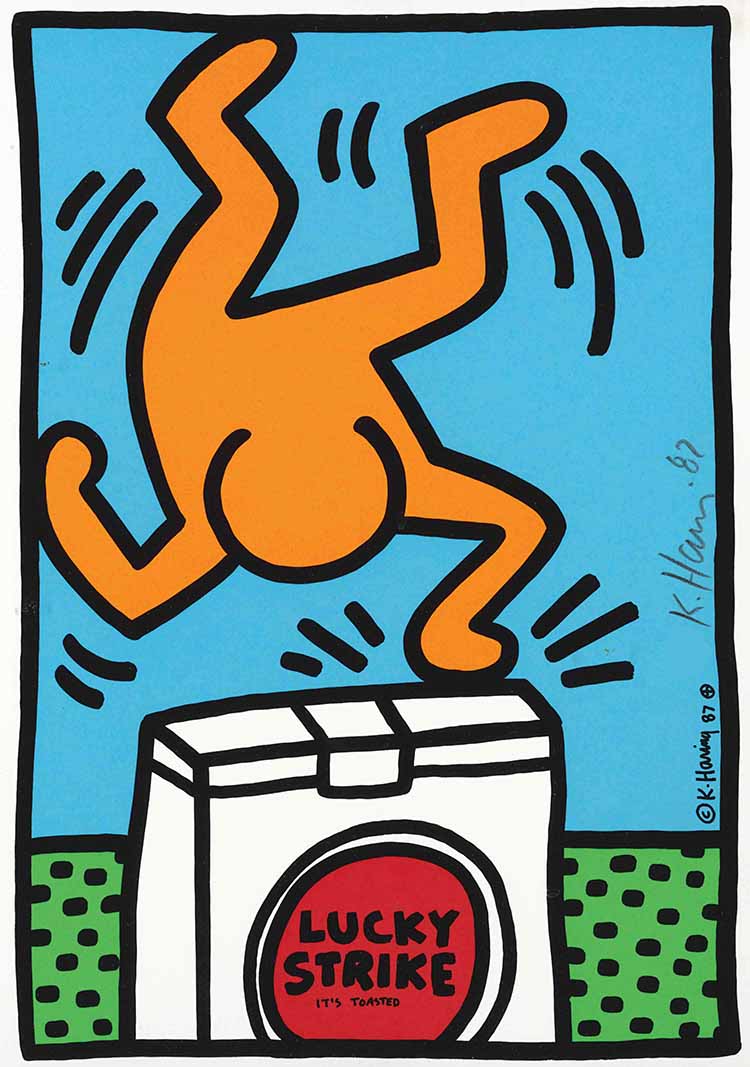 Keith Haring Lucky Strike (Plate 5), 1987 is the fifth installment of his Lucky Strike portfolio of 1987. The artist used a screen print to produce this work, a method of printing that allows him to print bold, precise, flat segments of different colors that combine to create an explicitly Pop work. This work bears a striking resemblance to the previous installment in this series, Lucky Strike (Plate 4), 1987. However, while the fourth installment is rendered in a limited palette of black, white and red, Lucky Strike (Plate 5), 1987 is illustrated in a refined palette of black, white, orange, blue, red and green. The symbol of the Lucky Strike cigarette box that appears in every work in this series maintains its bright red which continues to draw the viewers eye directly to it. An orange figure stands upside down on top of the box, balancing on one hand. The black action lines that surround this signature icon imply vigorous movement, perhaps in an attempt to open the box to get to the contents inside.

Catalogue Raisonné & COA:
Keith Haring Lucky Strike (Plate 5), from the Lucky Strike Portfolio, 1987 is fully documented and referenced in the below catalogue raisonnés and texts (copies will be enclosed as added documentation with the invoices that will accompany the sale of the work).

About the Framing:
Framed to museum-grade, conservation standards, Keith Haring Lucky Strike (Plate 5), from the Lucky Strike Portfolio, 1987 is presented in a complementary moulding and finished with silk-wrapped mats and optical grade Plexiglas.