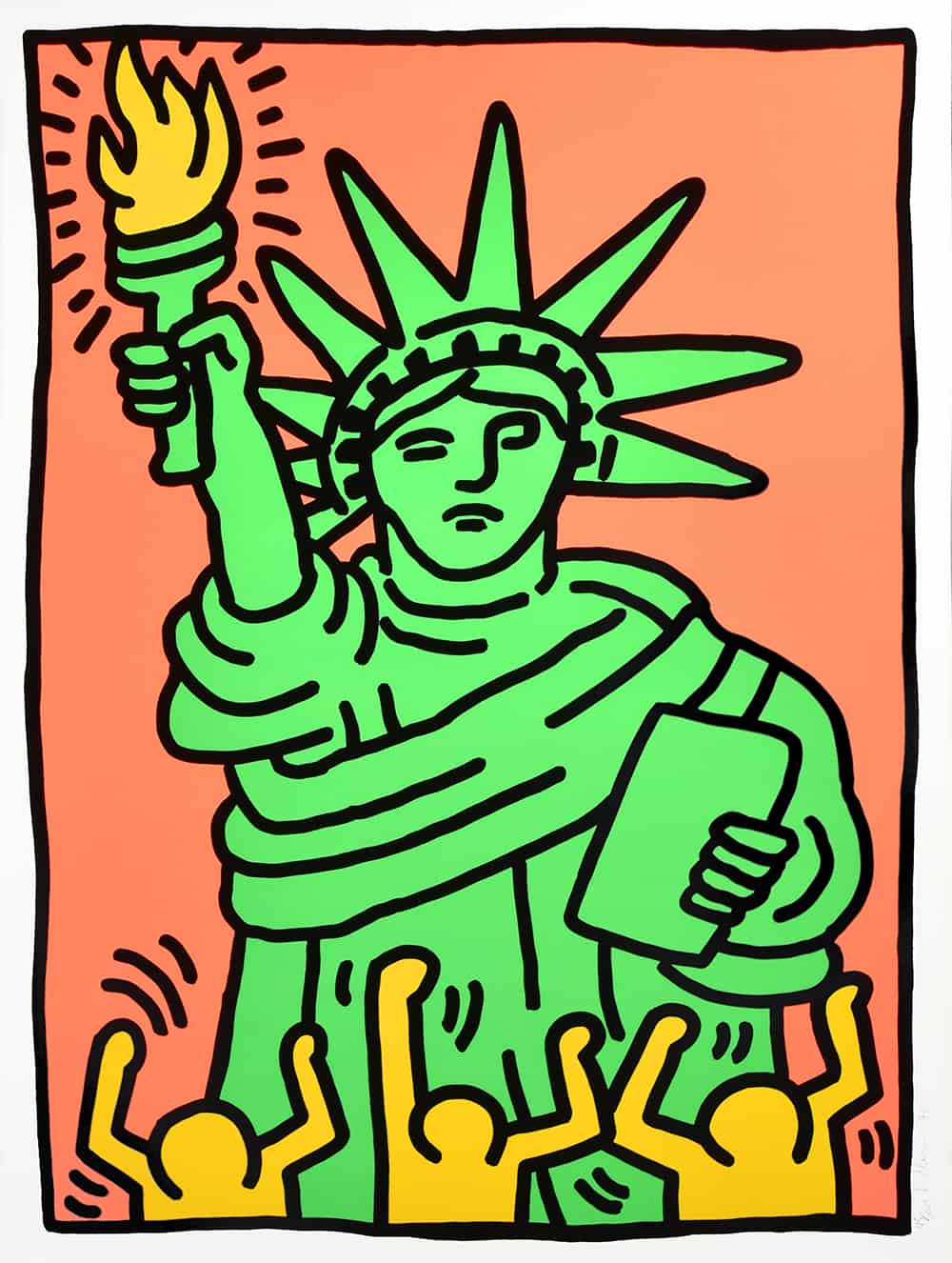 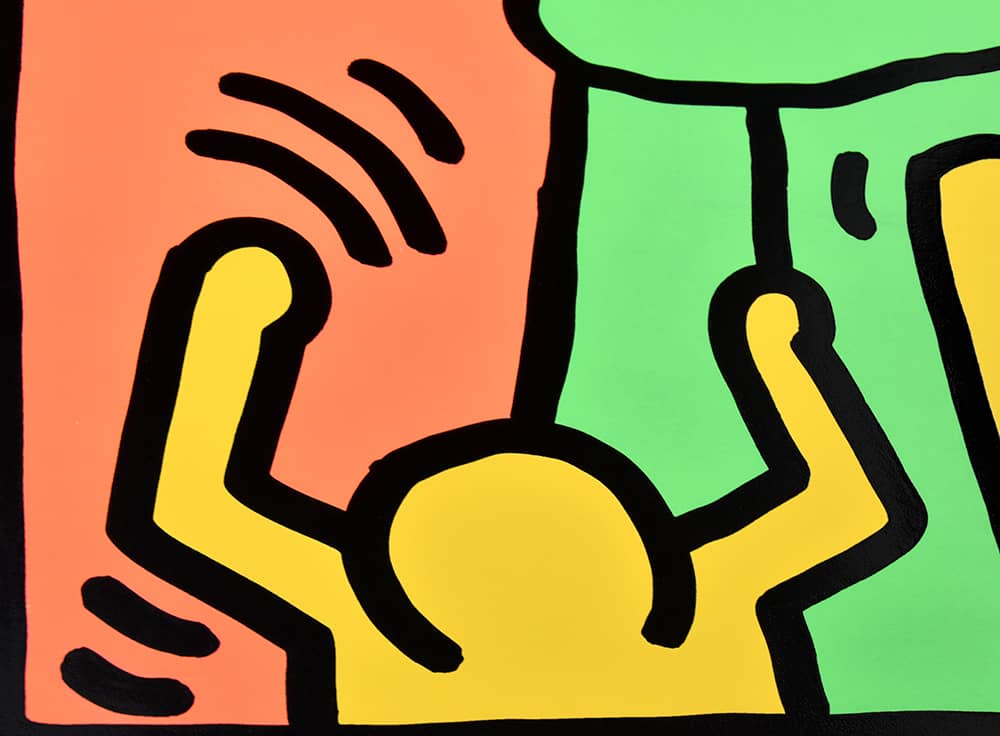 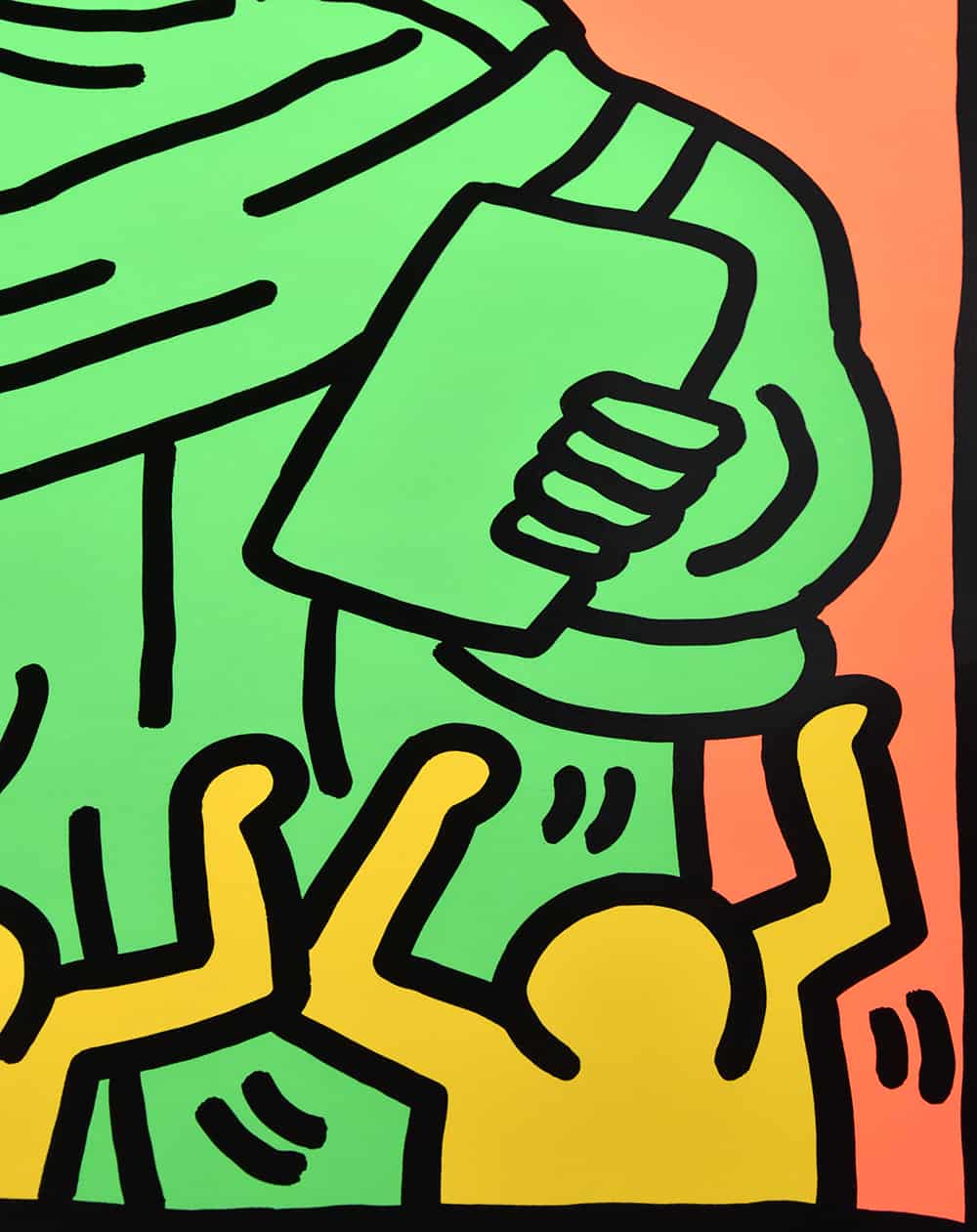 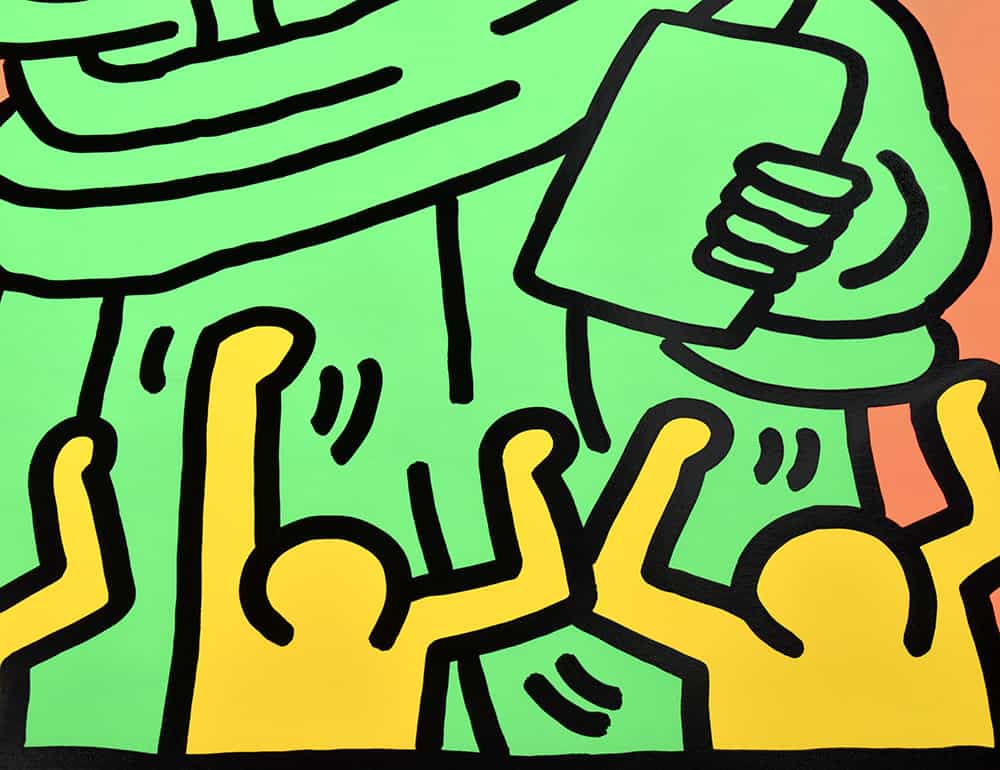 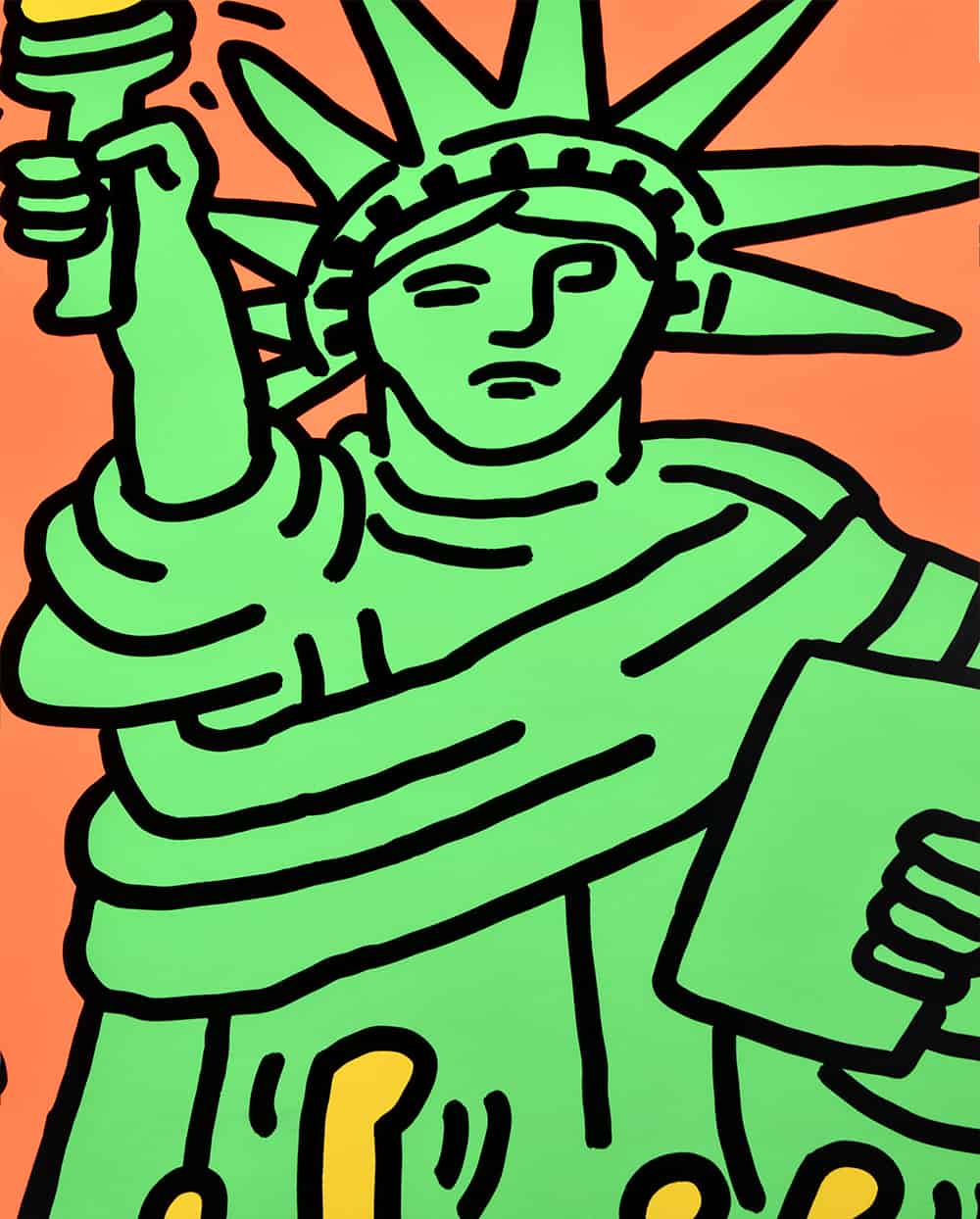 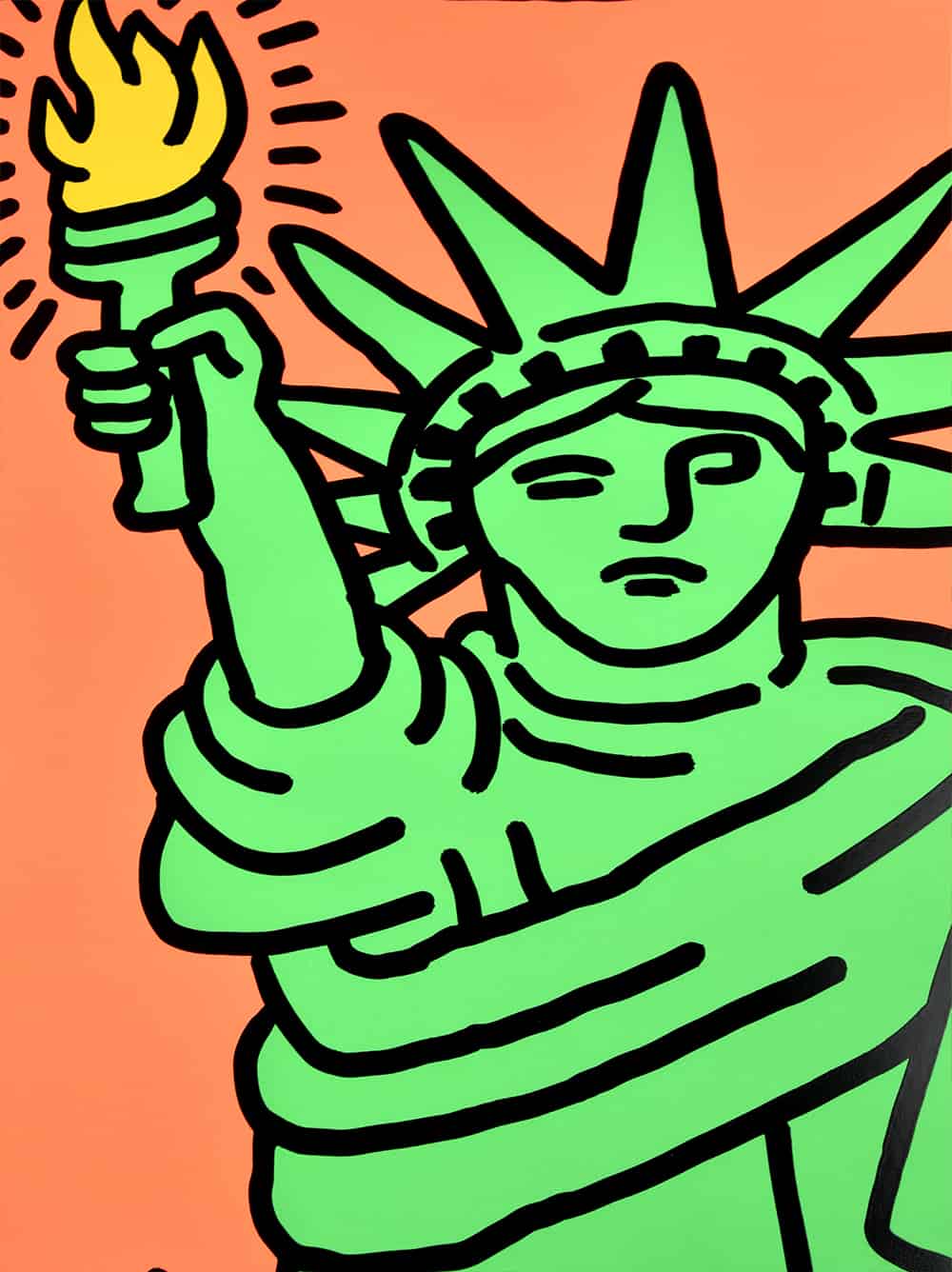 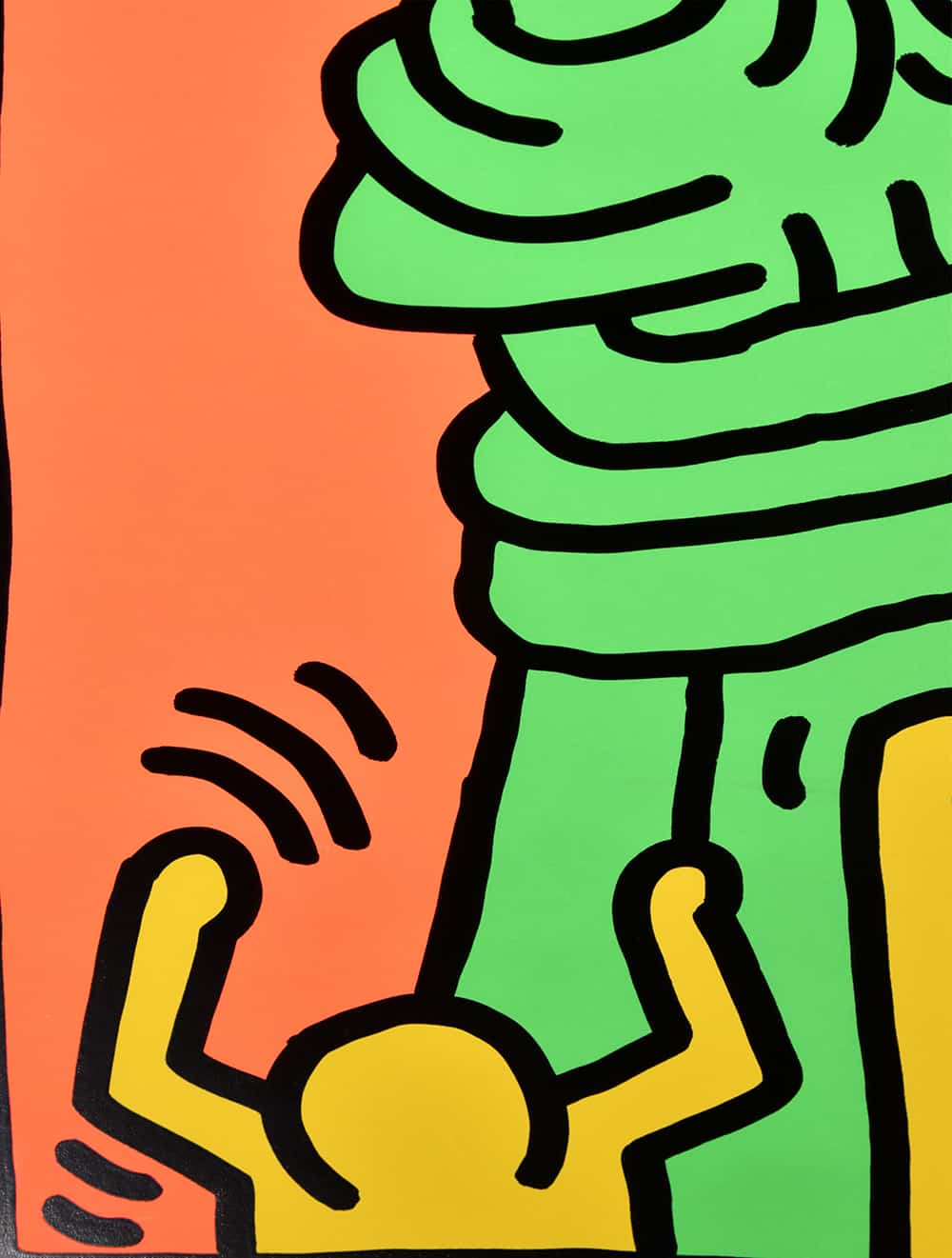 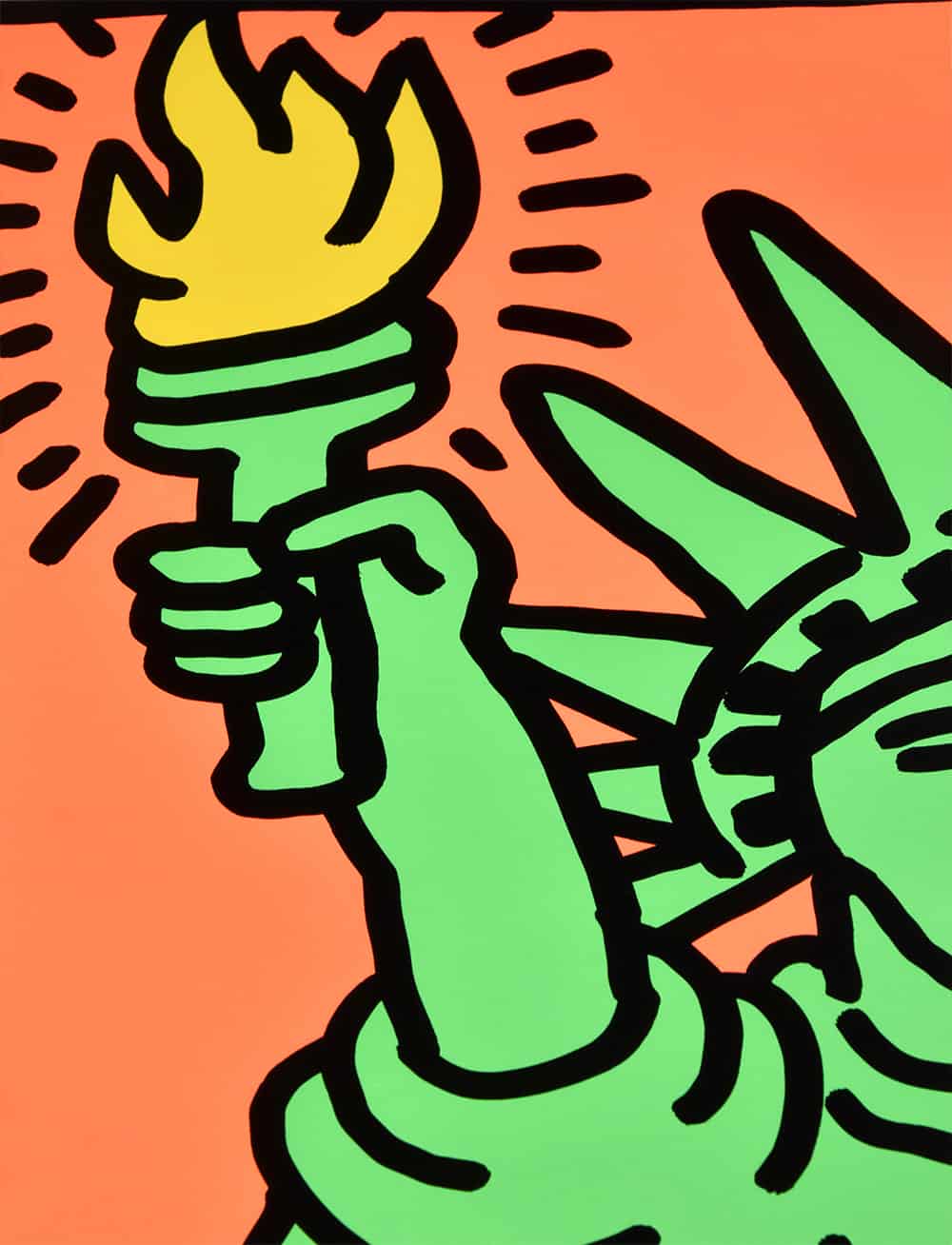 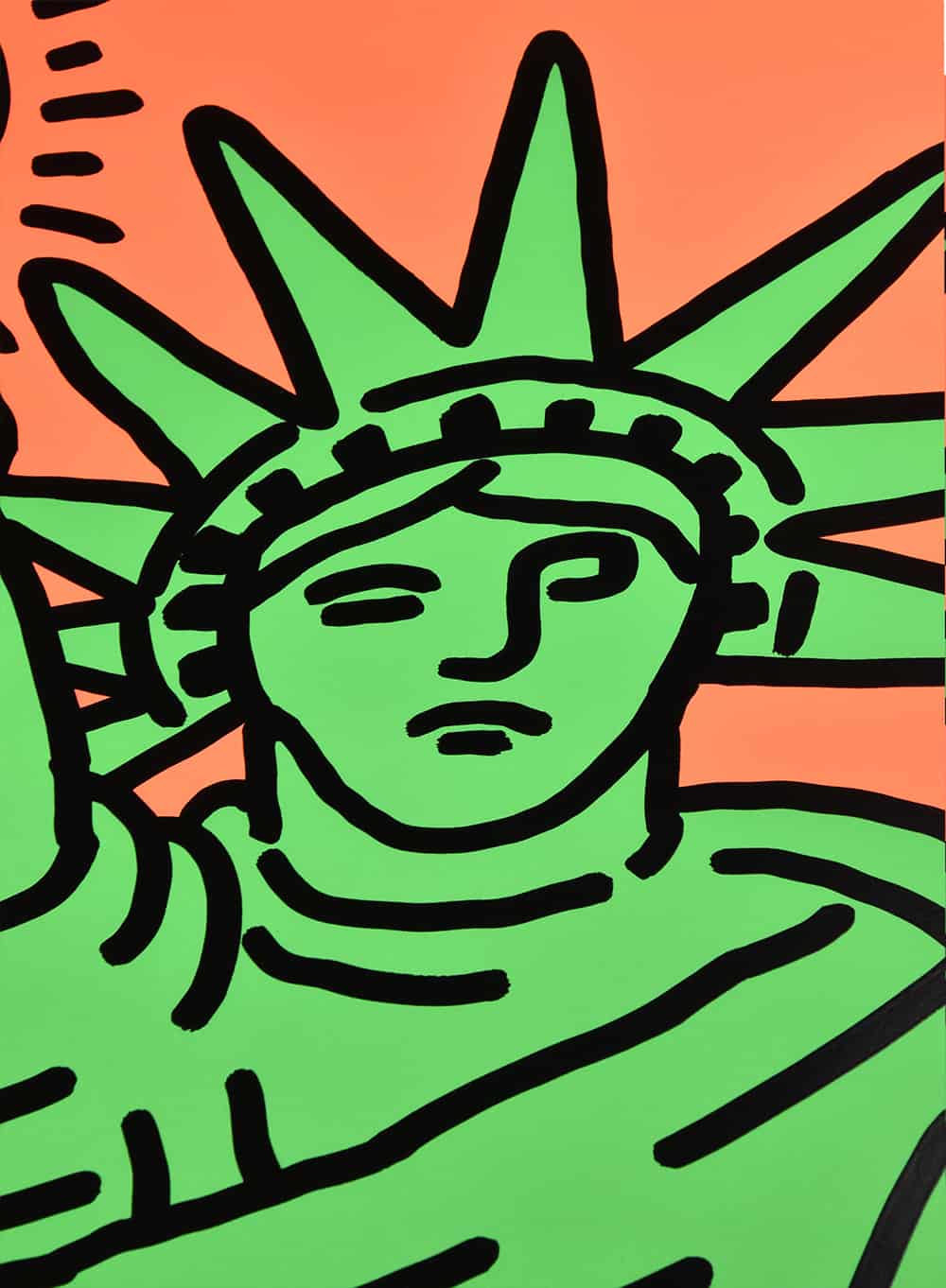 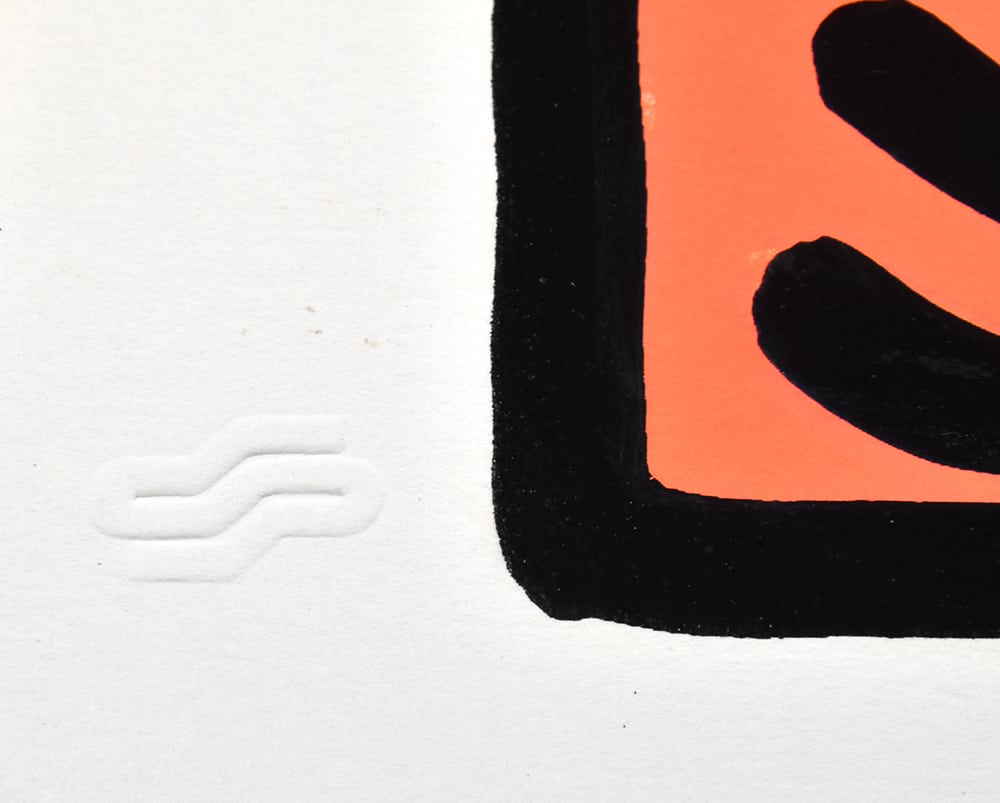 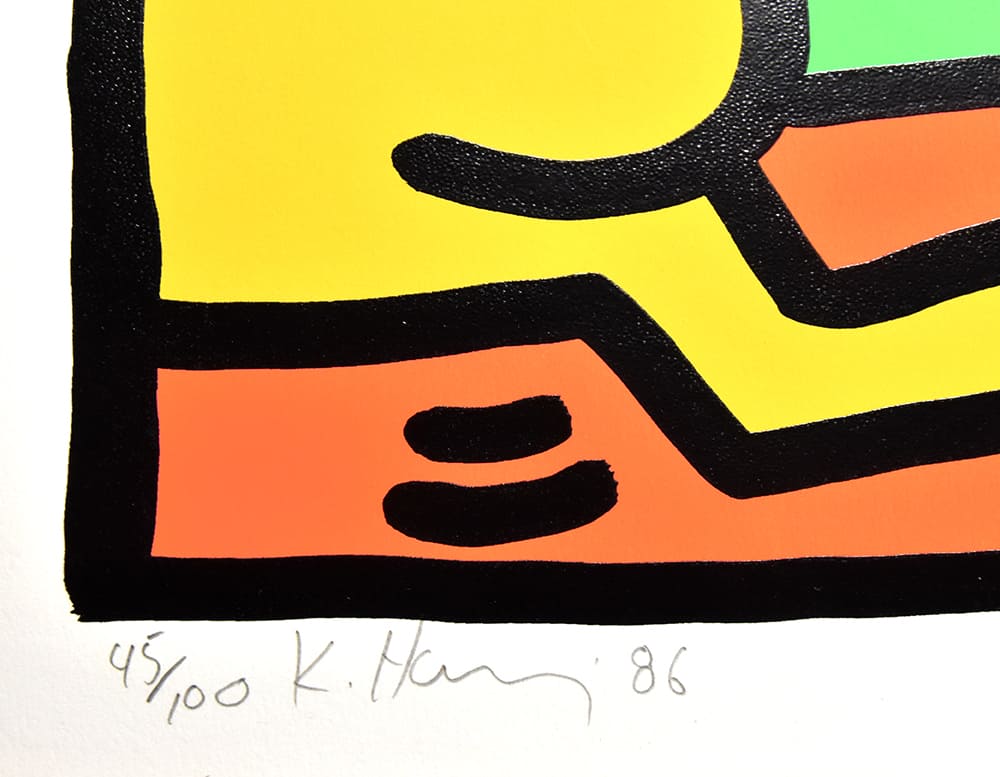 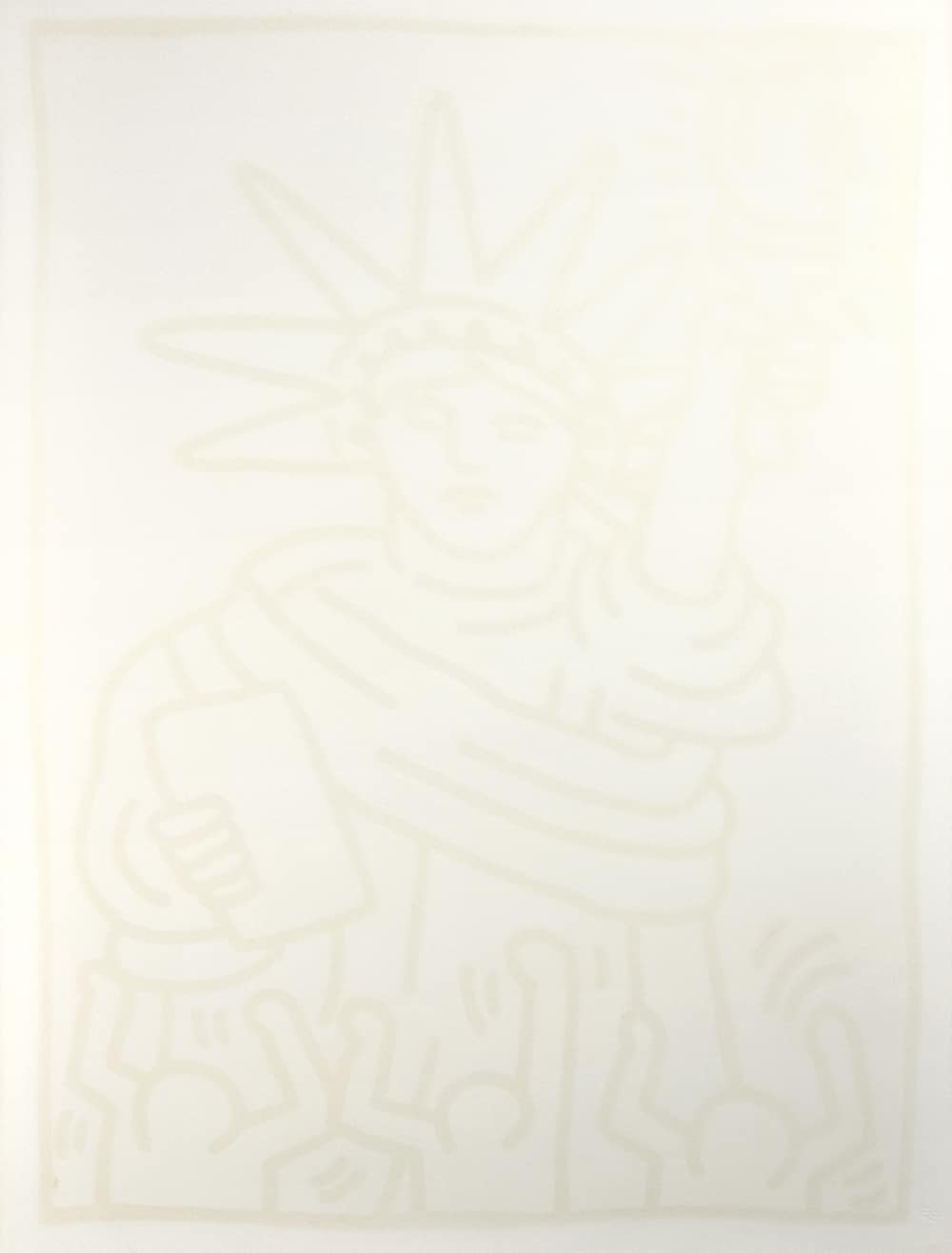 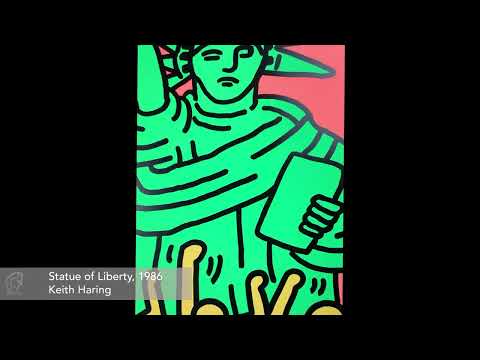 Keith Haring Statue of Liberty, 1986 is a touching tribute to an iconic symbol that means so much to so many. Awash in a vivid green that immediately catches the eye is the majestic Lady Liberty, a beacon of hope for weary travelers. With one arm pressed at her side, poignantly holding the tabula ansata, a tableau that symbolizes law and bears the adoption date of the Declaration of Independence, “JULY IV MDCCLXXVI”. In her right hand she wields a torch high above, the flame simplistic yet bold and inviting, symbolizing the light of liberty and the forward steps of progress. At the bottom of the composition are three of Haring’s signature caricatures, dancing and waving their arms high above their heads in celebratory fashion. The curved lines that surround their hands suggest movement; the lines a symbolic take that we continue to celebrate and chase the joys of liberty. A symbol that greets millions and embodies the hope and opportunity for those seeking a better life in America, this work was made to commemorate the 100 year anniversary of America receiving the statue as a gift from France.

Keith Haring Statue of Liberty screenprint was created in 1986, this color screenprint is hand-signed and dated by Keith Haring (Pennsylvania, 1958- New York, 1990) in pencil: ‘K Haring 86’. Numbered from the edition of 100, this work was published by Rupert Jasen Smith, New York.

Catalogue Raisonné & COA:
Keith Haring Statue of Liberty screenprint 1986 is fully documented and referenced in the below catalogue raisonnés and texts (copies will be enclosed as added documentation with the invoices that will accompany the final sale of the work).

About the Framing:
This Keith Haring Statue of Liberty screenprint 1986 is framed to museum-grade, conservation standards, presented in a complementary moulding and finished with silk-wrapped mats and optical grade Plexiglas.