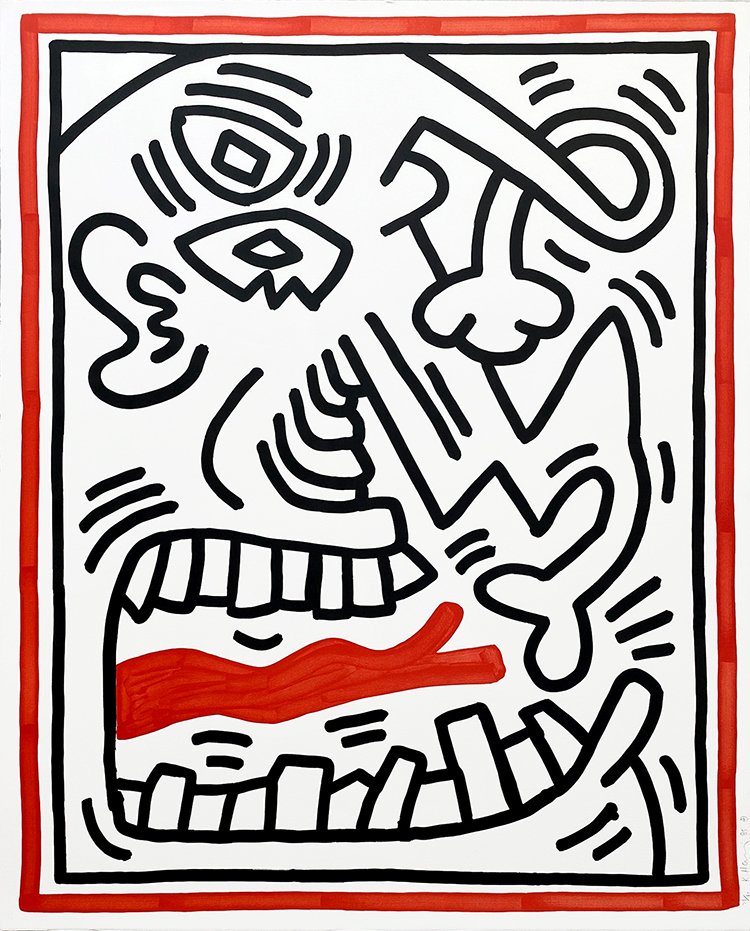 Keith Haring Three Lithographs (Plate 2), 1985 is the first installment of the artist’s Three Lithographs portfolio of 1985. Much of Haring’s work involves depictions of full-bodied figures; this work, however, is a portrait of a form in a limited palette of red, white and black. The work’s painterly quality comes from being born of lithography, a printing process that utilizes an ink-repellent slab of stone or metal. The portrait emerges from the left side of the composition and faces the right. Its mouth is open, exposing its jagged teeth and its bright red tongue that extends to tough the cleft tip of its nose. In the top left corner of the composition, the face’s ear sits on its cheek beneath both of its eyes. Like in ancient Egyptian hieroglyphs where the artist most likely found inspiration, both eyes are rendered as if being viewed from the front while the rest of the form is in profile.

Catalogue Raisonné & COA:
Keith Haring Three Lithographs (Plate 2), from the Three Lithographs Portfolio, 1985 is fully documented and referenced in the below catalogue raisonnés and texts (copies will be enclosed as added documentation with the invoices that will accompany the sale of the work).

About the Framing:
Framed to museum-grade, conservation standards, Keith Haring Three Lithographs (Plate 2), from the Three Lithographs Portfolio, 1985 is presented in a complementary moulding and finished with silk-wrapped mats and optical grade Plexiglas.