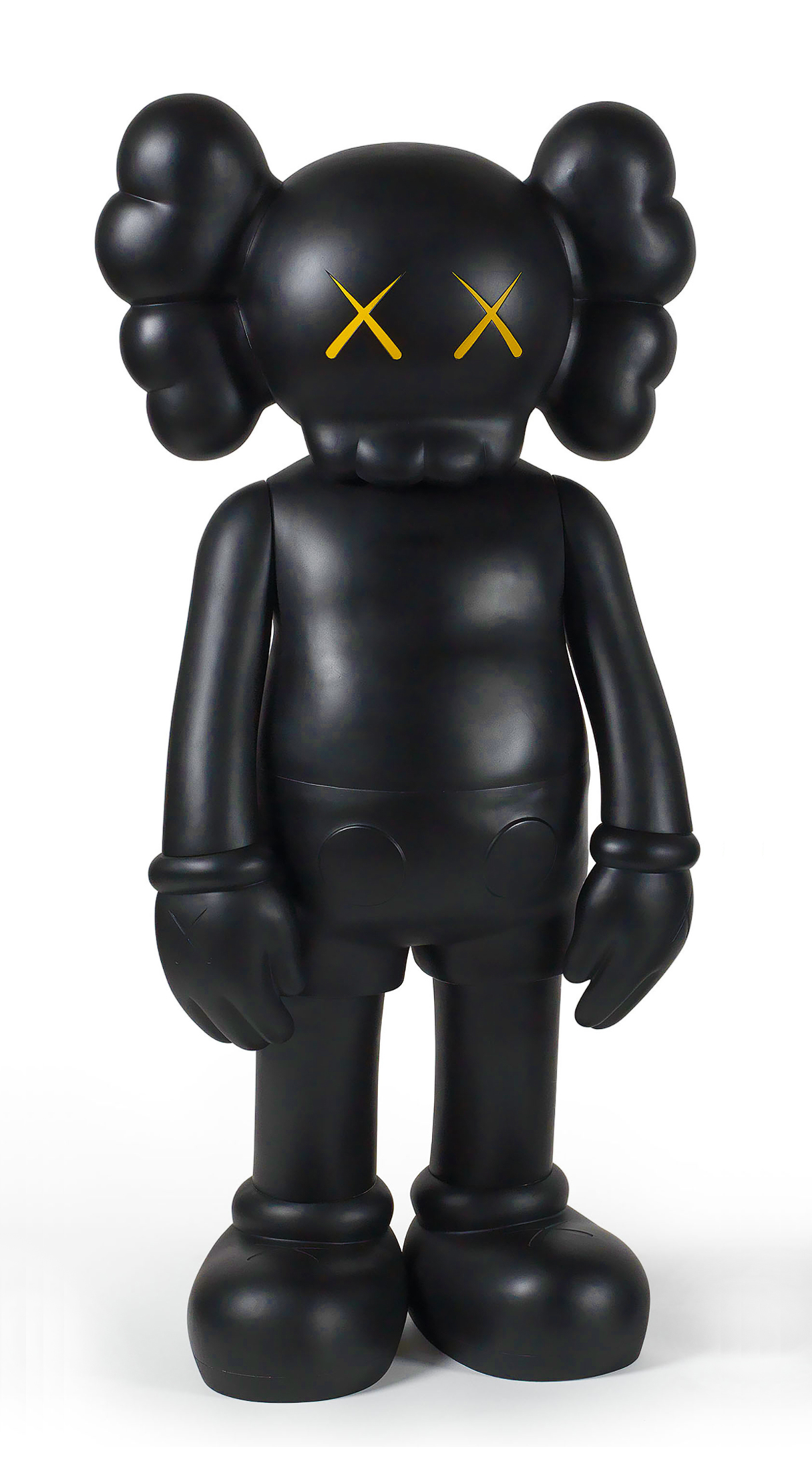 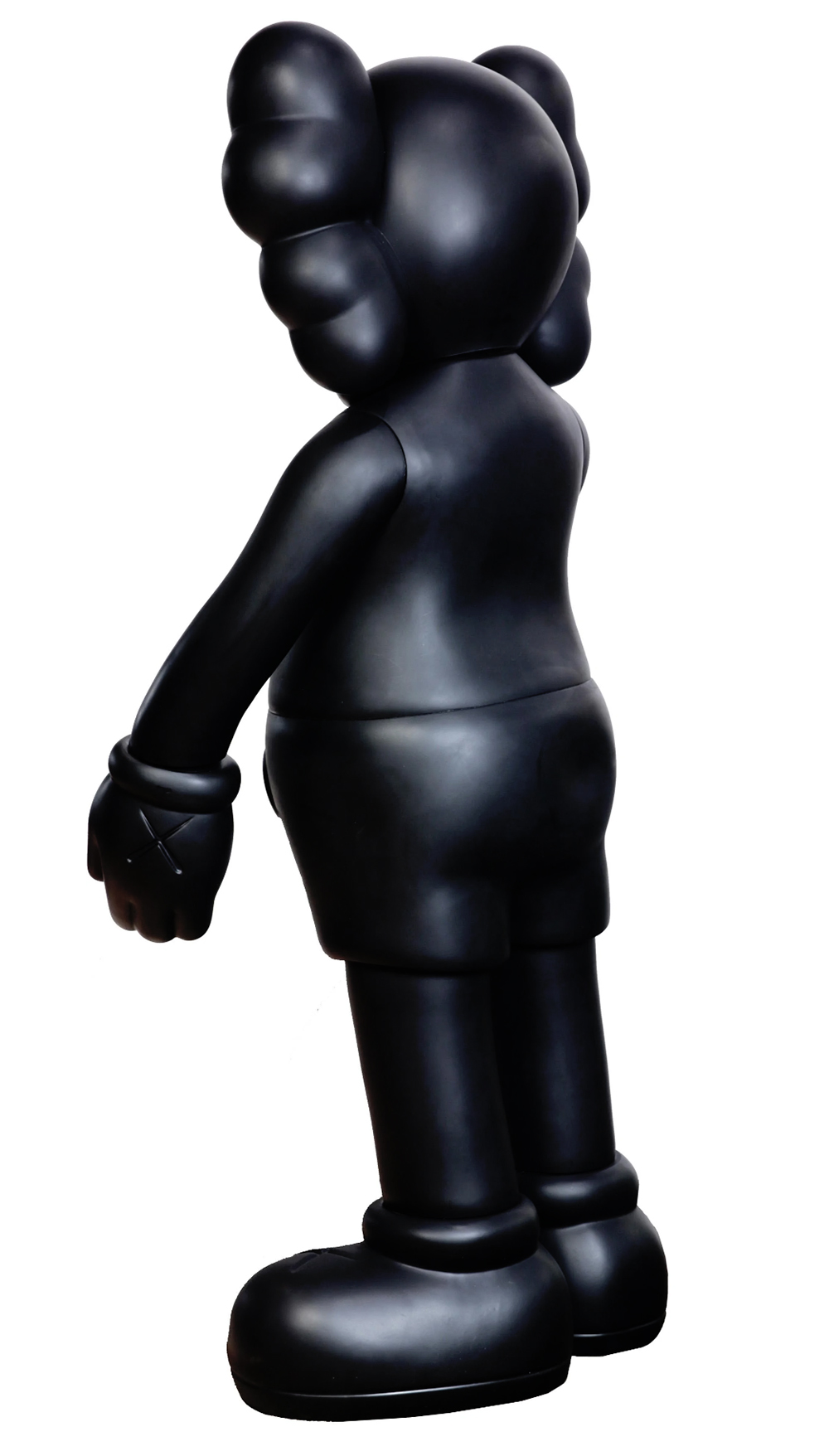 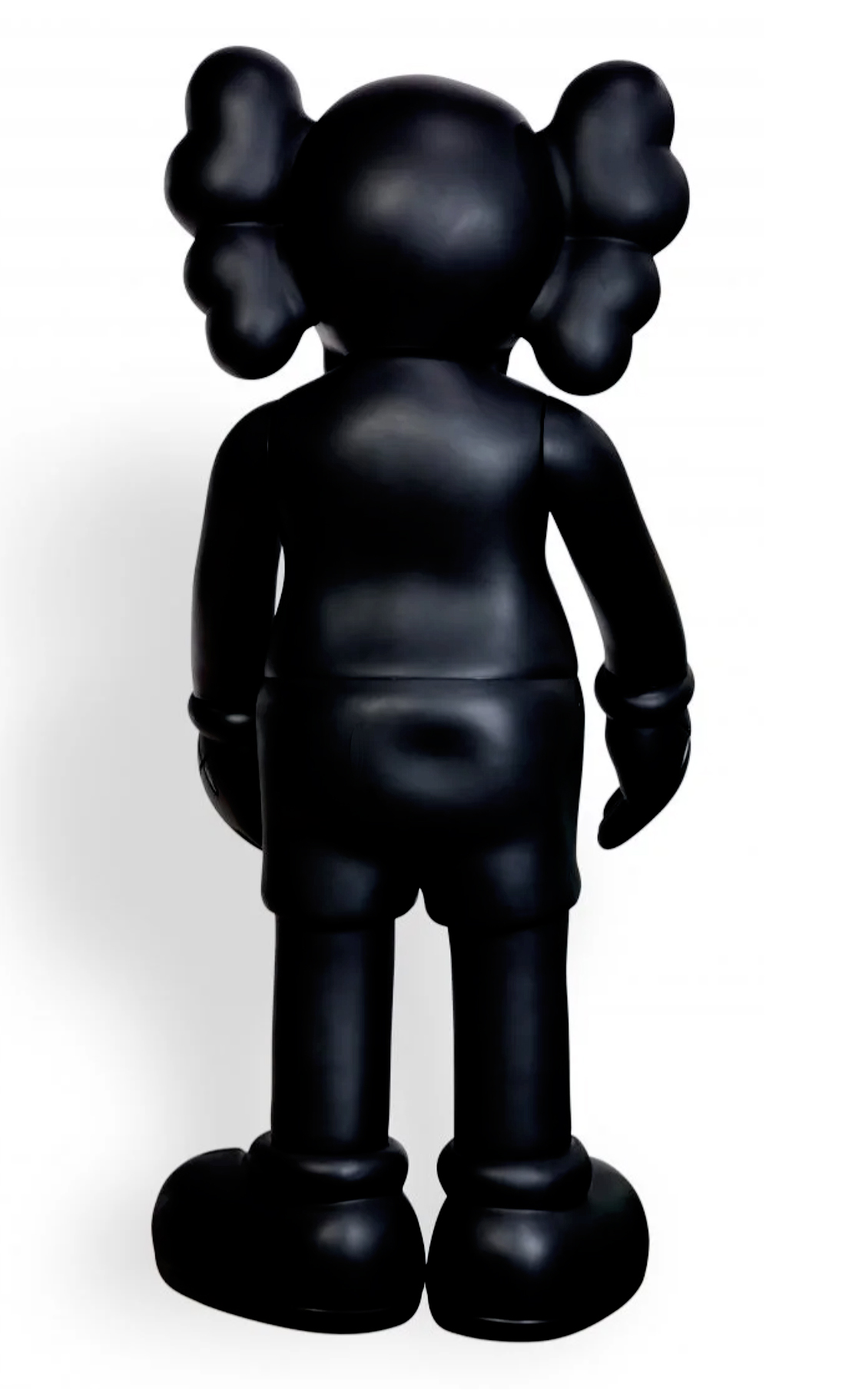 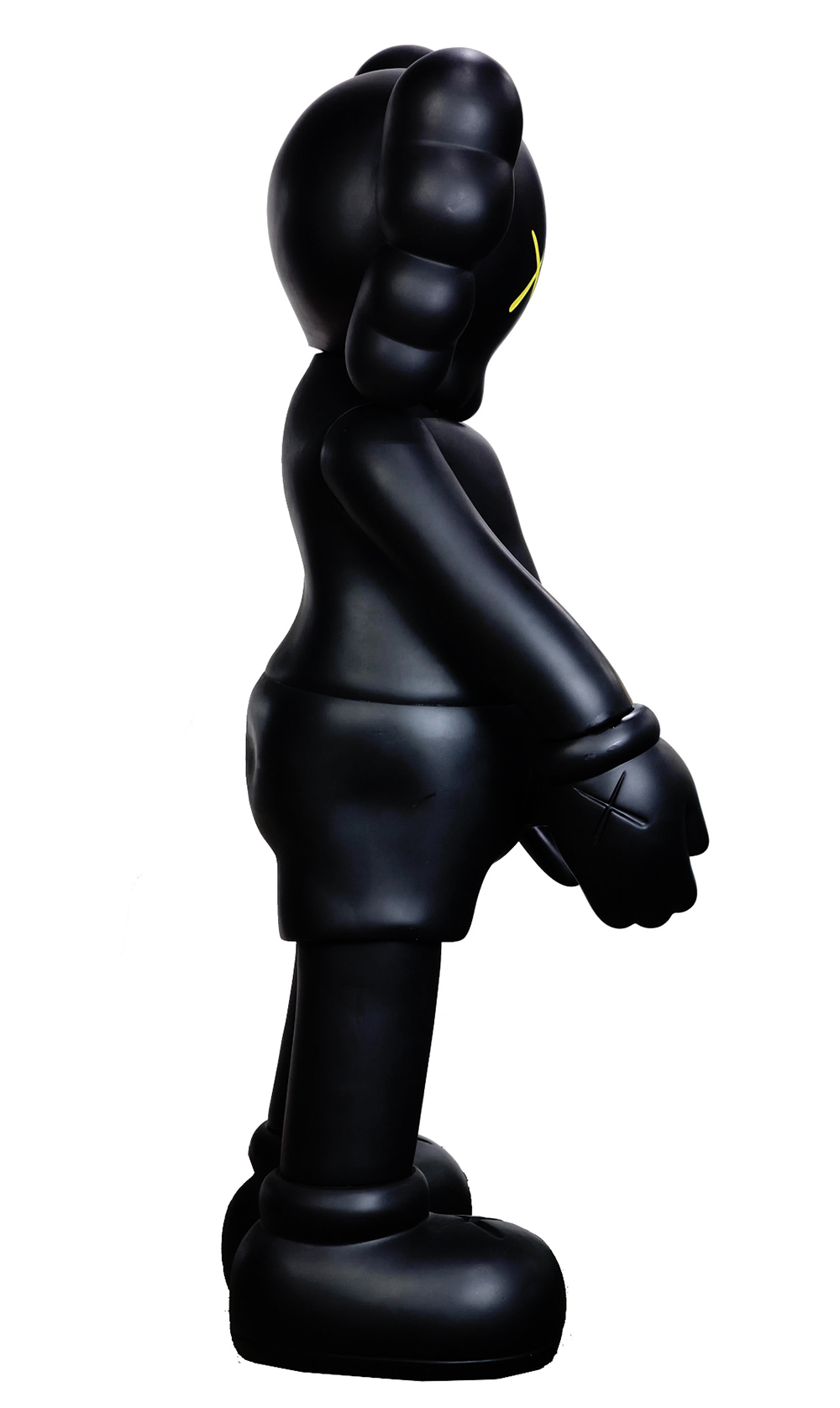 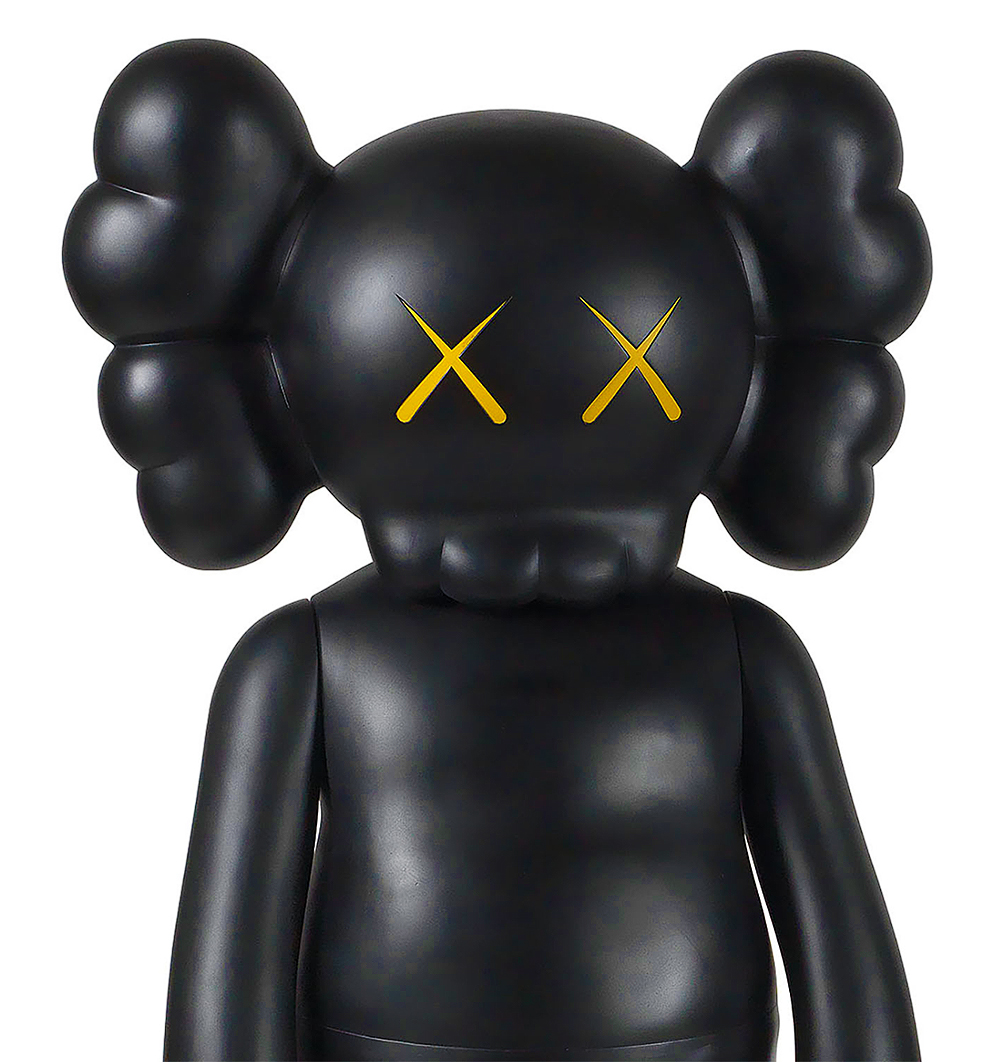 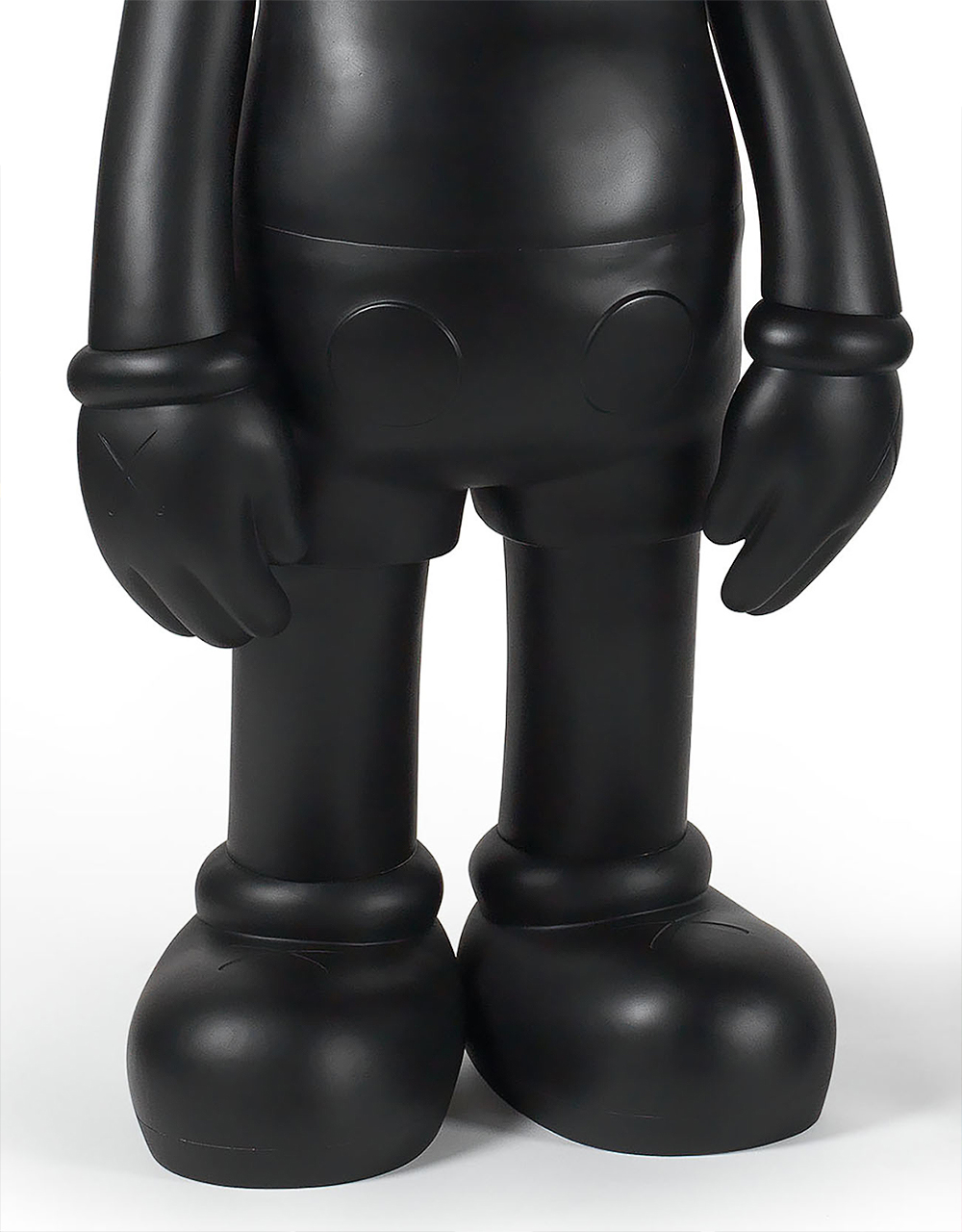 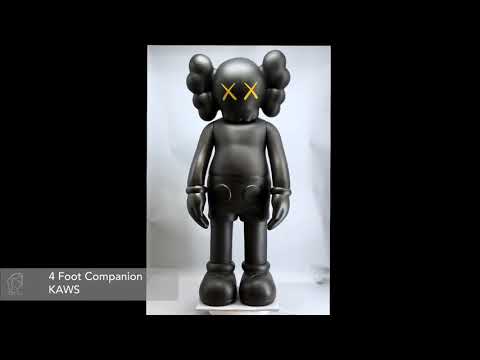 KAWS’s Four Foot Companion (Black), 2007 is the epitome of the artist’s unique style at the intersection of fine and commercial art, incorporating influences from Pop art, street art, and commercial toy design. “Companion” is a recurring character in KAWS’s work that appropriates and manipulates the well-known image of Mickey Mouse. The figure’s large shoes and gloved hands are reminiscent of the beloved children’s character, but in this instance, the four-foot figure is rendered in all black. Further deviating from the iconic character design, the figure’s head is a bloated version of a skull and crossbones with the artist’s signature “XX” in bold yellow in place of the eyes. The morbid connotations of the figure’s coloring and form, as well as its rigid stance with its arms at its sides, subvert the cultural expectations of a figure with so much resemblance to an adored cartoon. As a result, “Companion” occupies a space that is both lively and lifeless, pairing a typically cheerful and familiar image with a certain despondent energy. KAWS’s amalgamation of disparate imagery creates a distinctive take on the character that is something entirely new, and Four Foot Companion (Black), 2007 showcases the artist’s talent for defying expectations and his particular brand of avant-garde humor.

Works like Four Foot Companion have launched KAWS’s career and meteoric rise in the art world. His work has been featured in major exhibitions around the world, including at the Brooklyn Museum, Modern Art Museum of Fort Worth, Shanghai’s Yuz Museum, Yorkshire Sculpture Park and Longside Gallery, Contemporary Art Museum in St. Louis, Galerie Perrotin in New York, and the High Art Museum. In addition, work by KAWS is part of the collections of major museums, including the Modern Art Museum of Fort Worth, Brooklyn Museum, and Museum of Contemporary Art San Diego.

Created in 2007, this fiber-reinforced plastic is from the edition of 100.

127 CM X Catalogue Raisonné & COA:
KAWS 4 Foot Companion (Black), 2007 is fully documented and referenced in the below catalogue raisonnés and texts (copies will be enclosed as added documentation with the invoices that will accompany the sale of the work).

Sell your KAWS fine art with us. We offer free evaluations. Learn more about selling with us.