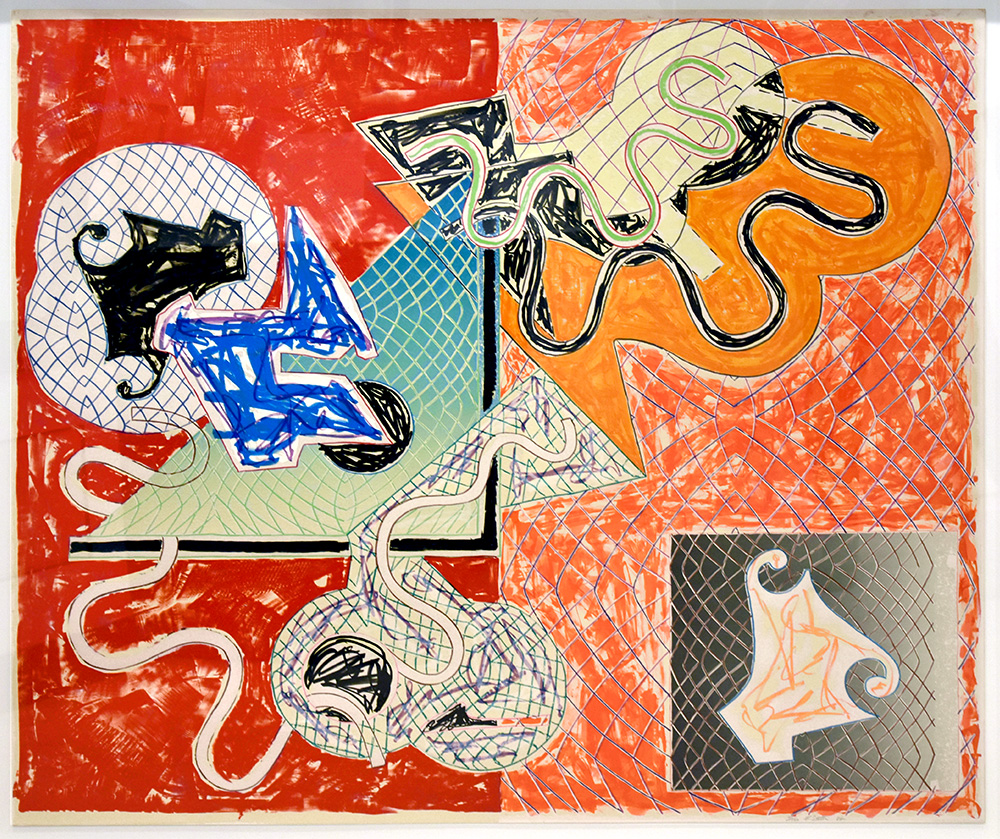 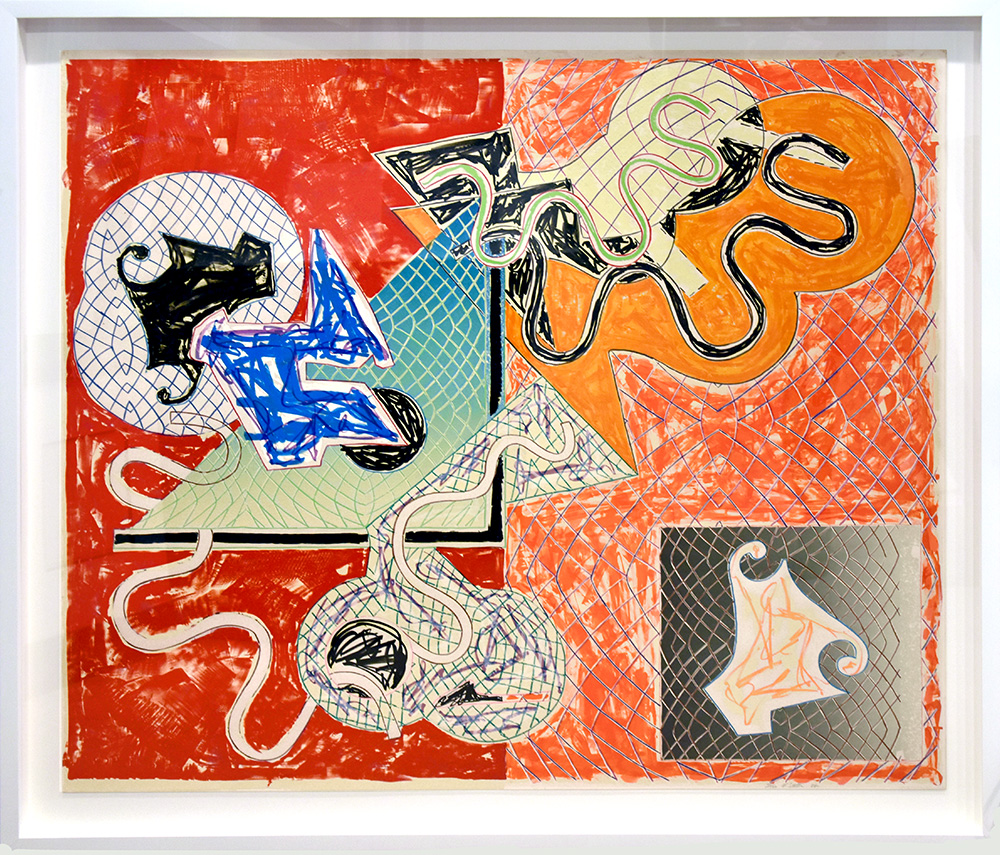 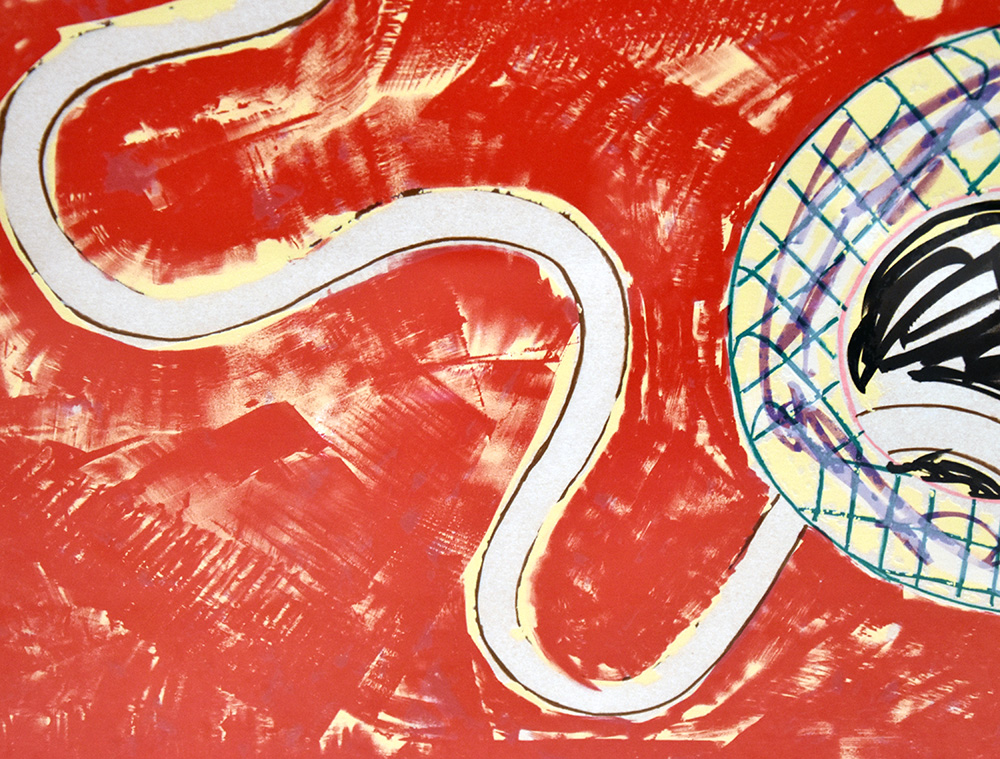 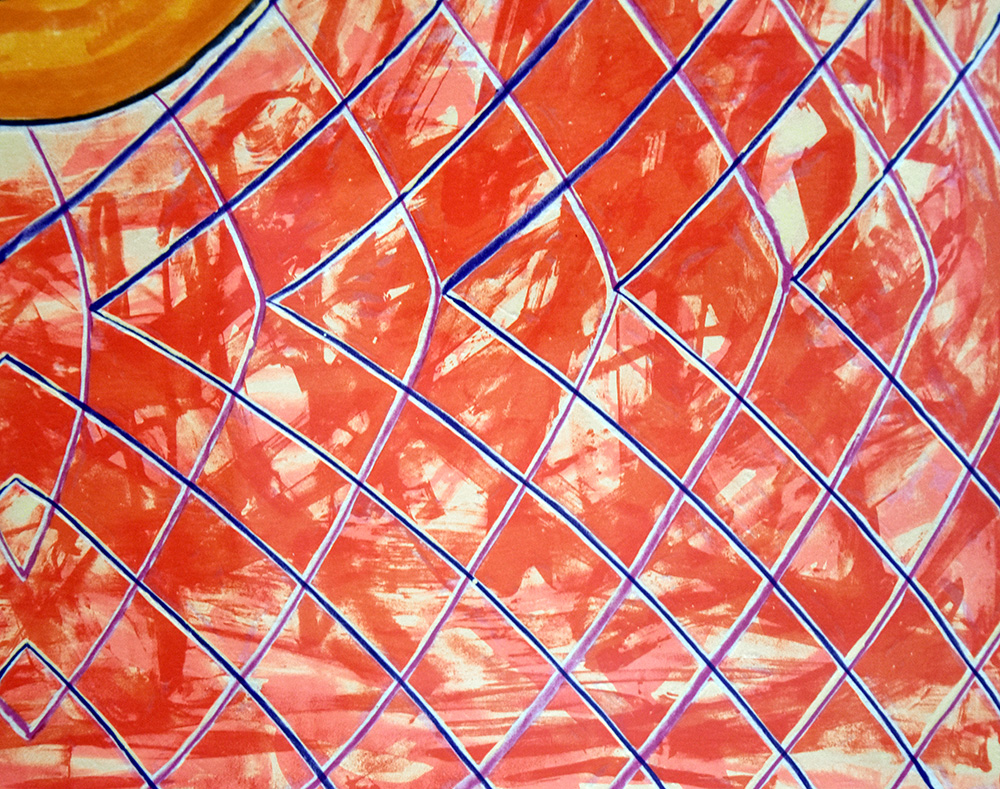 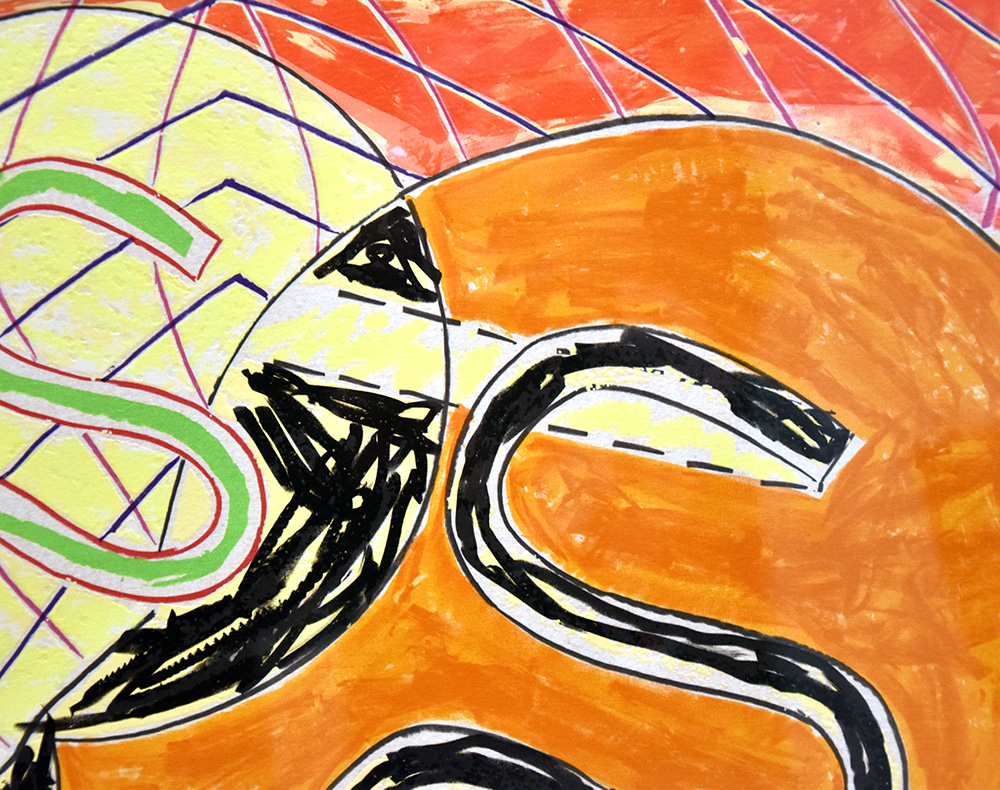 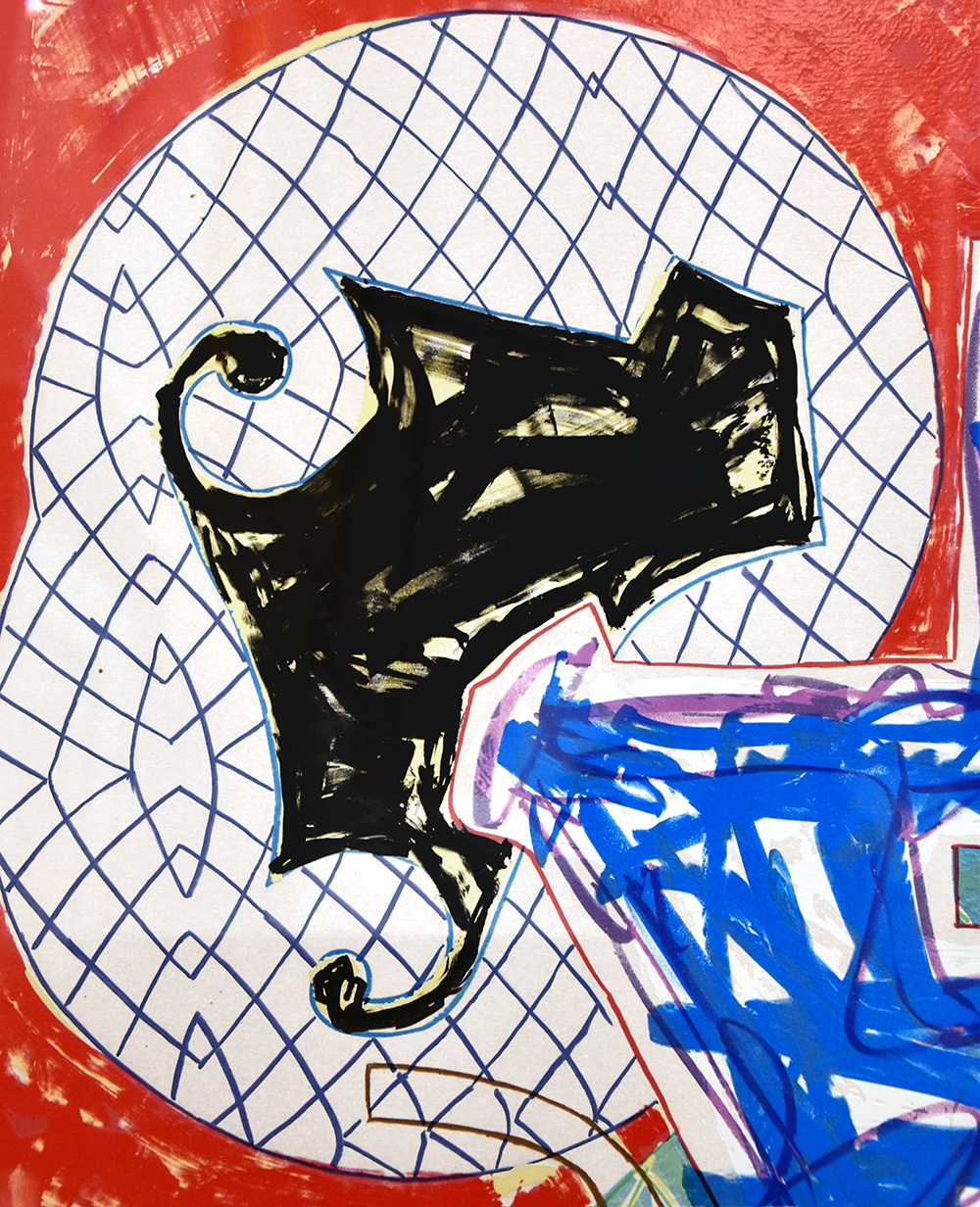 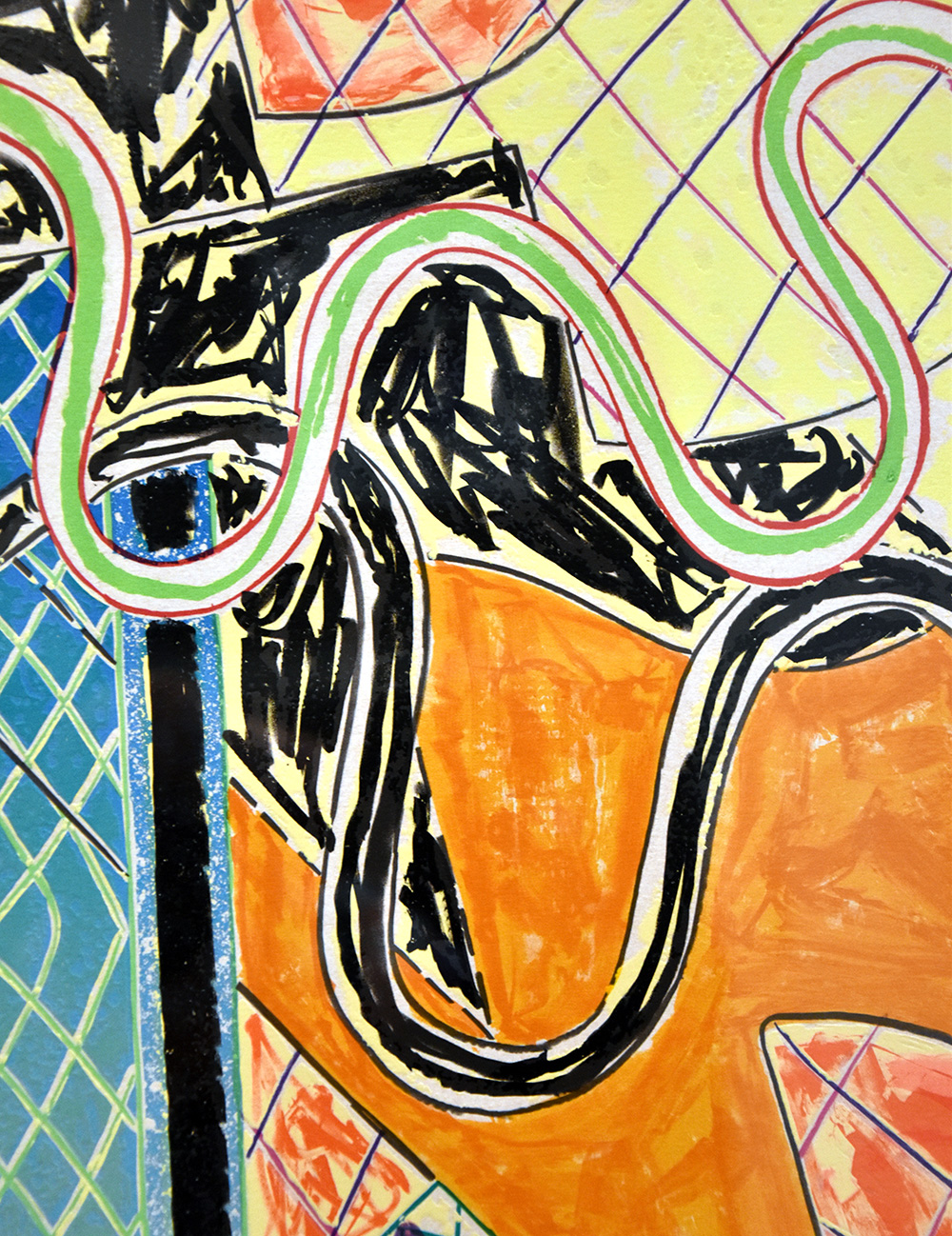 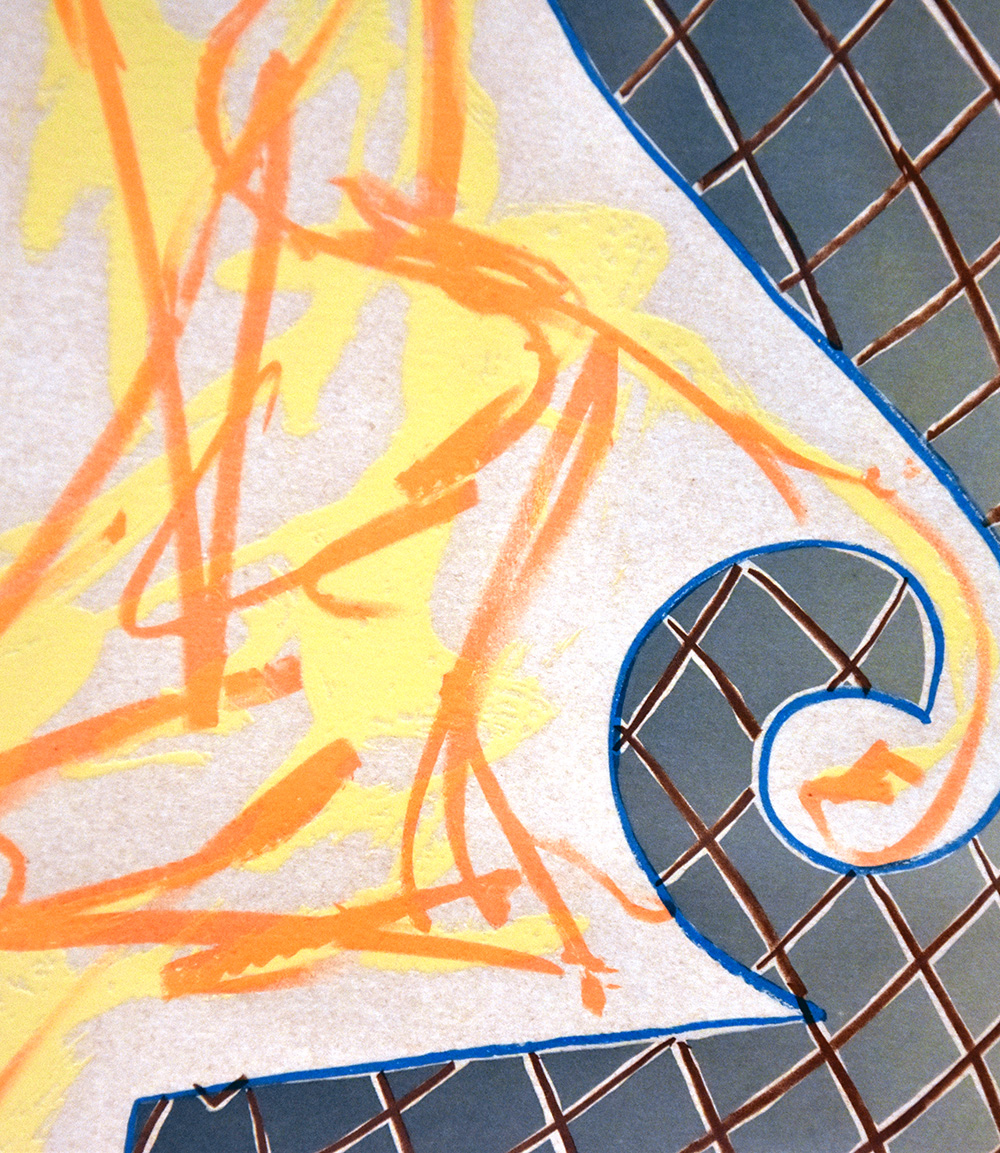 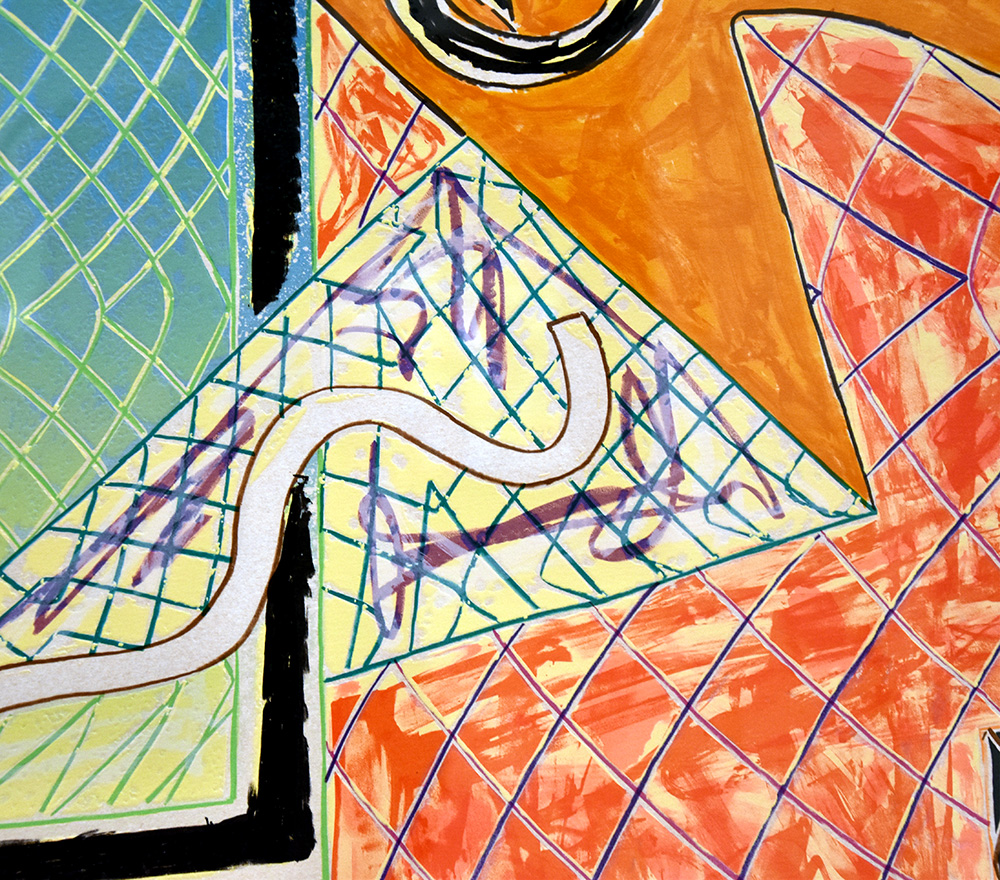 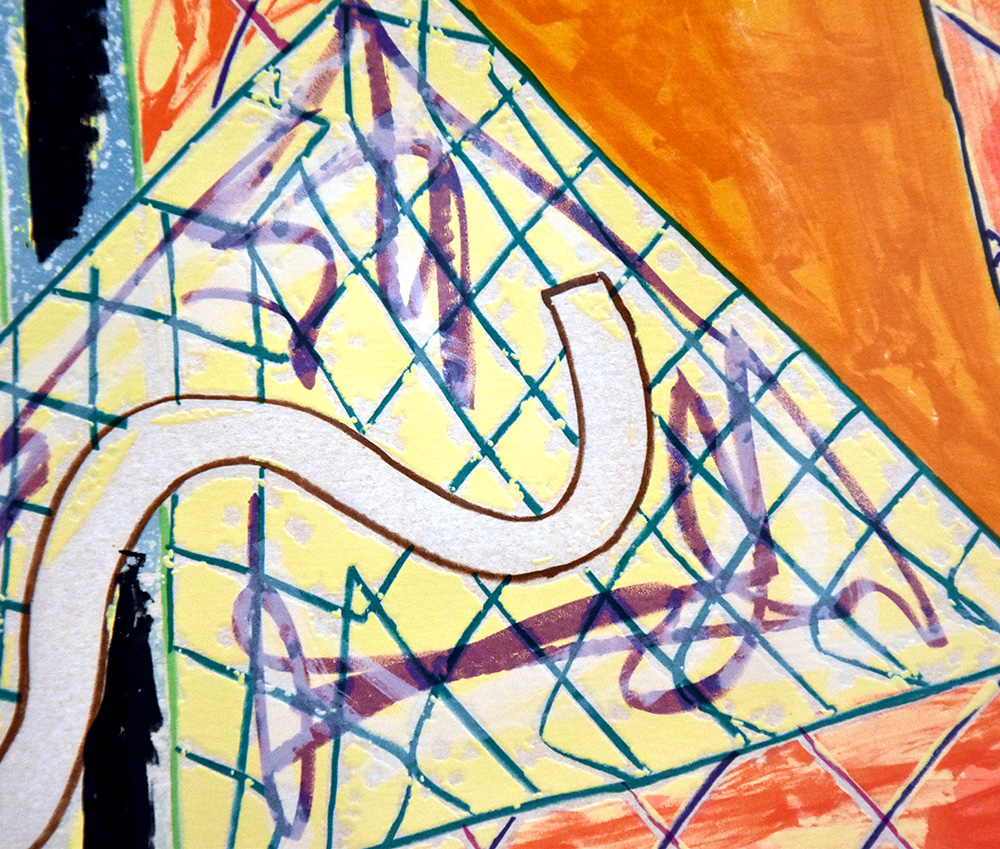 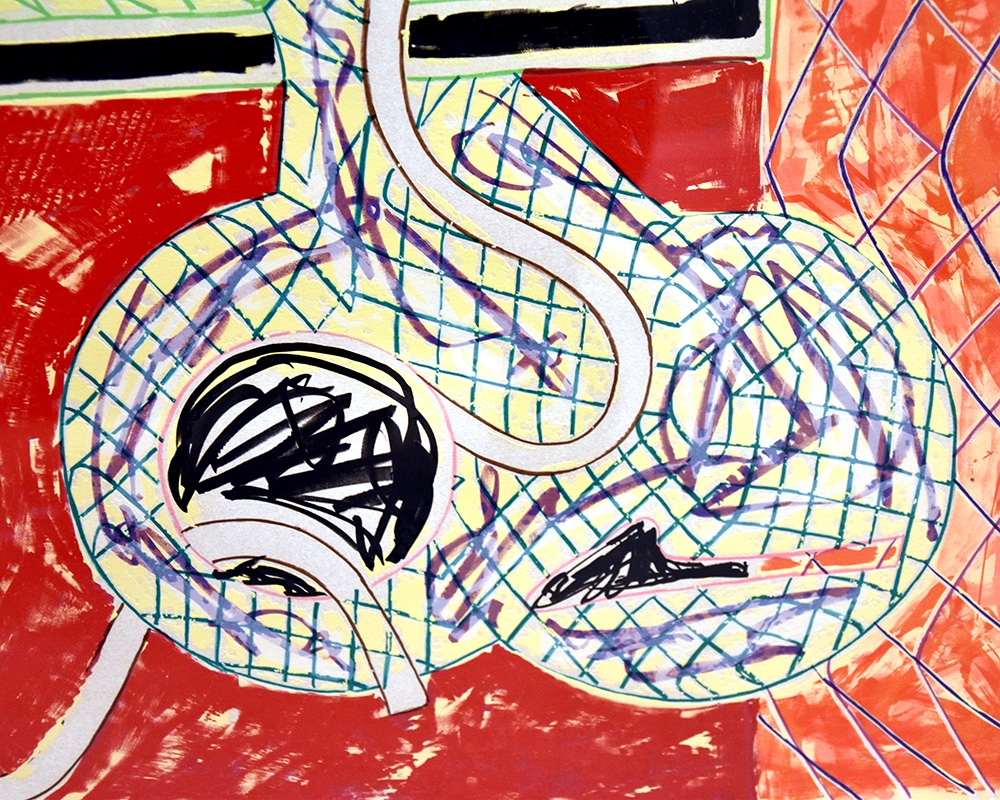 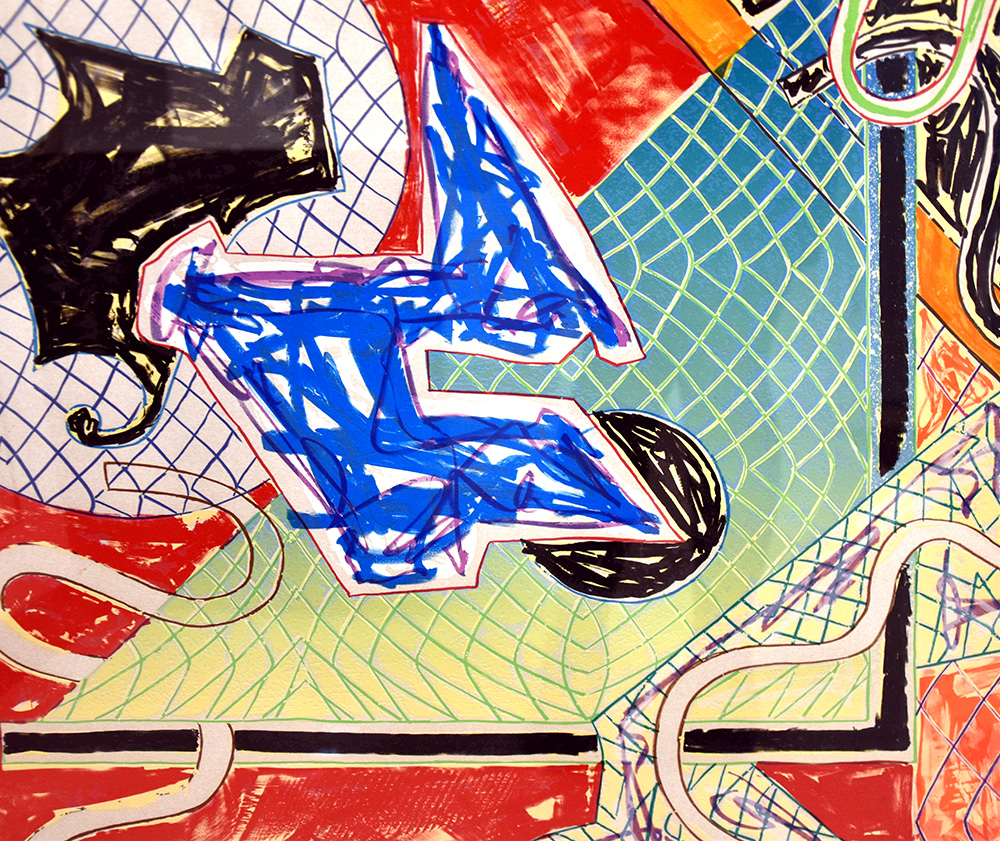 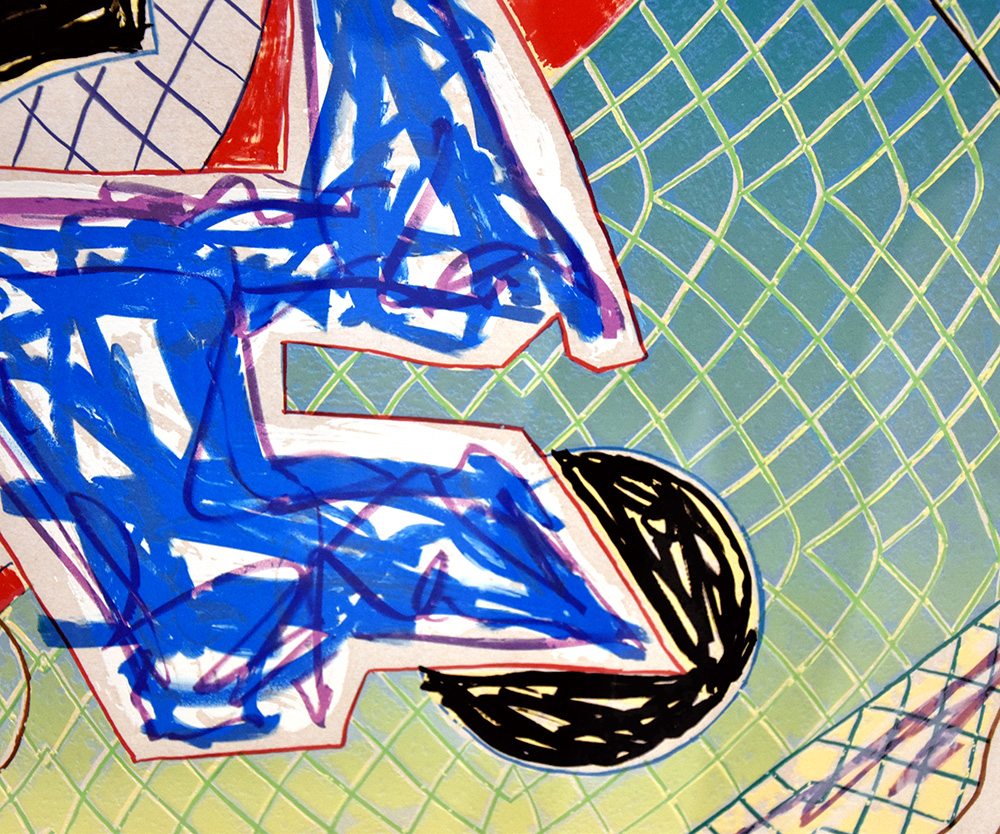 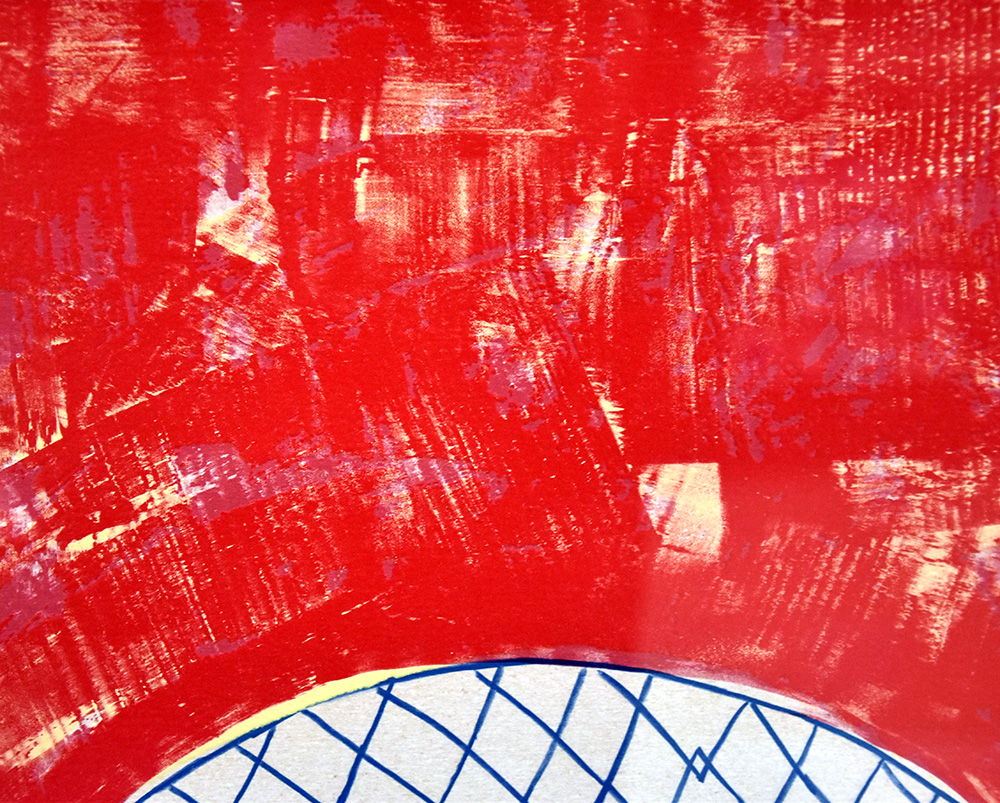 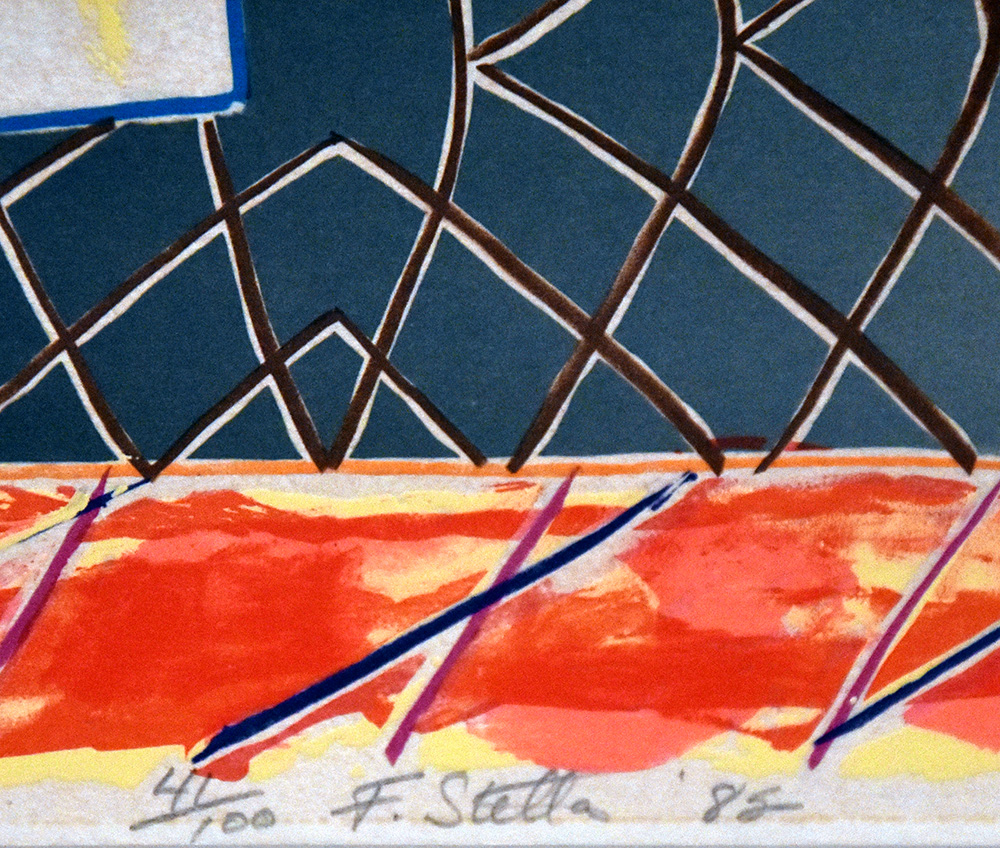 The fourth of five works from the Shards series, Frank Stella Shards IV, 1982 features a bold collage of squiggly lines and hard-edged shapes against a bright red background. The warm colors of red and orange dominate the composition, lending the overall image a sense of vitality and potential energy. The image is divided in half by a more saturated red to the left and a lighter red to the right covered in a netlike grid of dark periwinkle. This netlike grid is integrated throughout the image, filling in shapes like the white circular form near the upper left corner and the large triangle next to it. An undulating line, appearing twice in the upper right corner and once in the lower left corner, is another motif in this image that can be found in the other works of this series. The contrast between rigid and organic shapes creates a dynamic visual effect that adds a sense of depth to the overall composition. The small square in the lower right corner of the composition has such sharply defined edges that it visually evokes the picture-in-picture feature on a television screen. Frank Stella Shards IV, 1982 showcases not only the artist’s innovative compositions but his masterful handling of texture.

Created in 1982, this lithograph and screenprint is hand signed and dated by Frank Stella (Massachusetts, 1936 - ) and numbered from the edition of 20 artist’s proofs in pencil. This work was printed aside from the numbered edition of 100 by Petersburg Press, New York.

Catalogue Raisonné & COA:
Frank Stella Shards IV, 1982 is fully documented and referenced in the below catalogue raisonnès and texts (copies will be enclosed as added documentation with the invoices that will accompany the final sale of the work).

1. Axsom, Richard H. The Prints of Frank Stella: A Catalogue Raisonné. New York: Hudson Hills Press, 1983.Listed and illustrated as catalogue raisonné no. 147.
2. A Certificate of Authenticity will accompany this work.

About the Framing:
Framed to museum-grade conservation standards, Frank Stella Shards IV, 1982 is presented in a complementary moulding with silk mats and optical-grade Plexiglas.