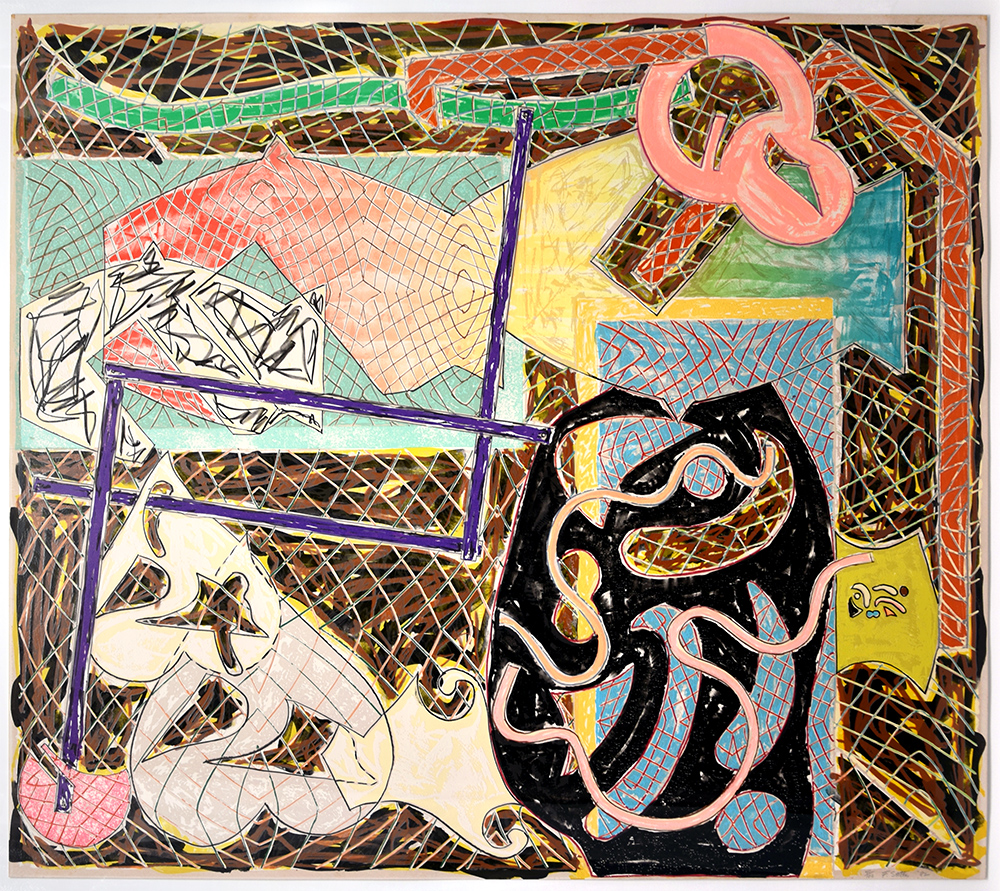 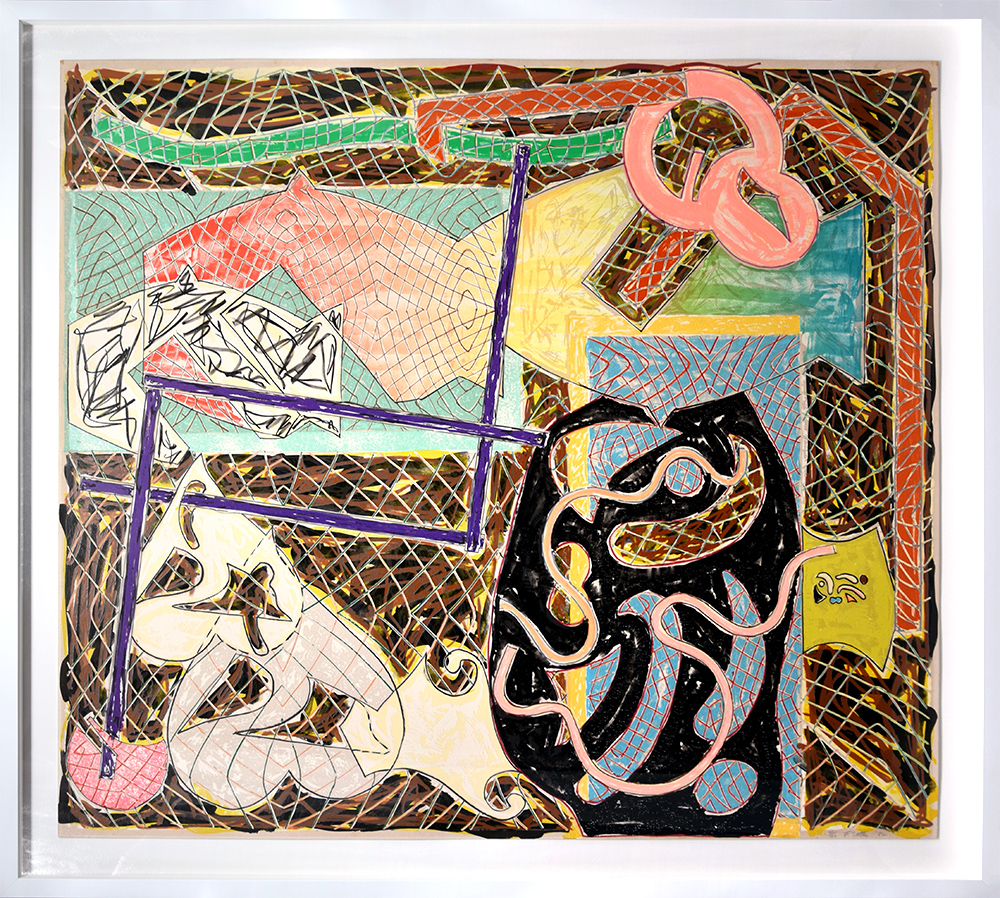 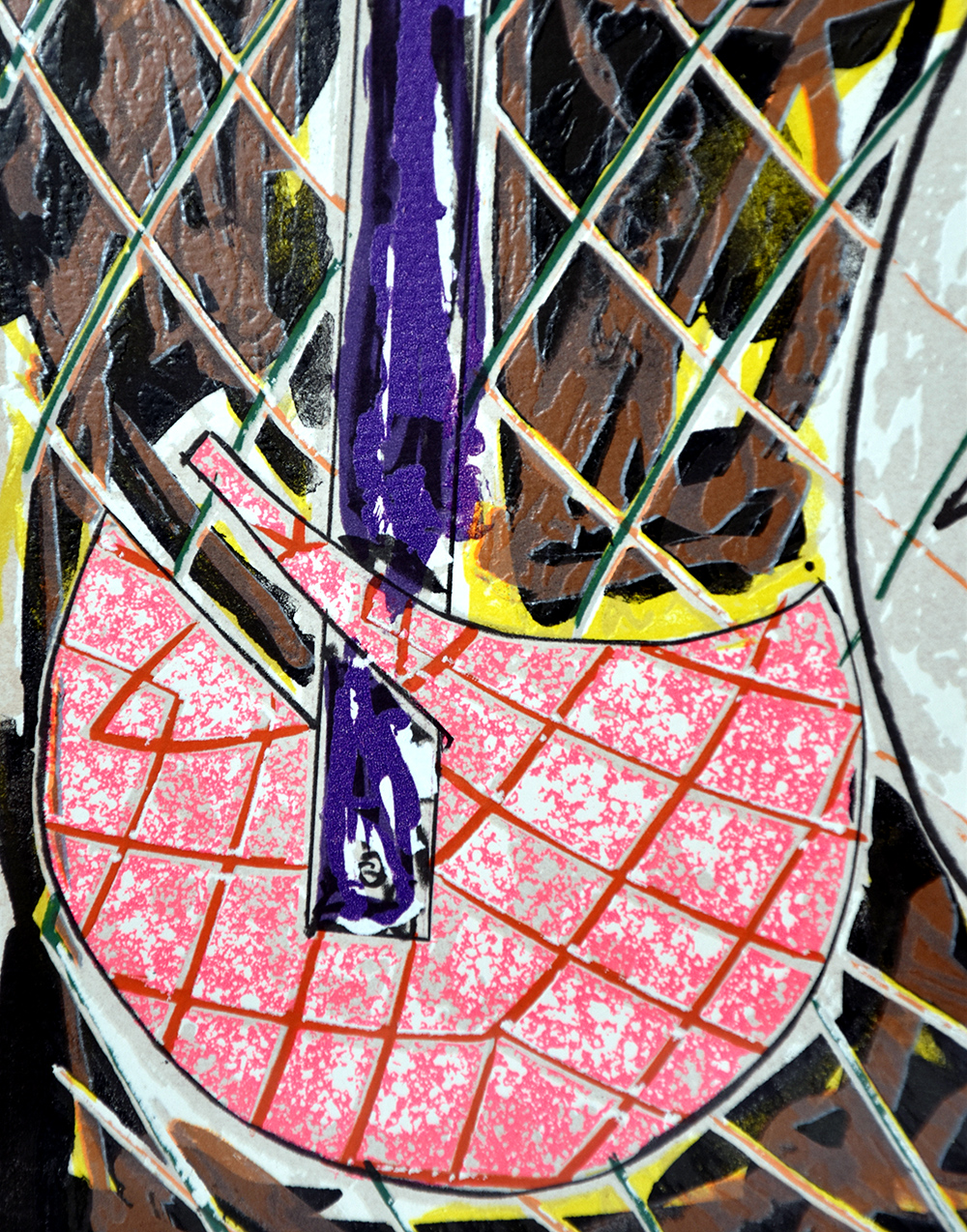 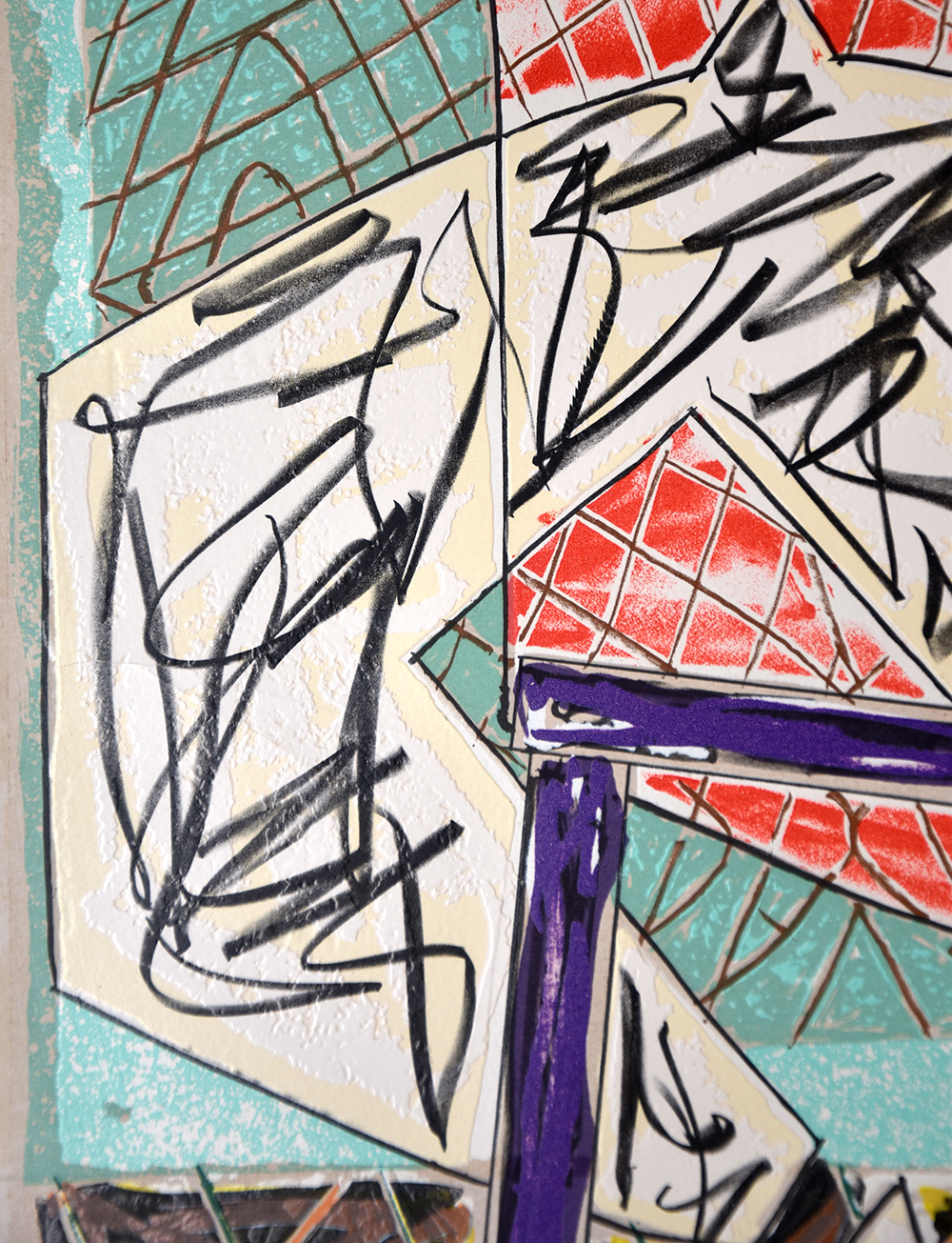 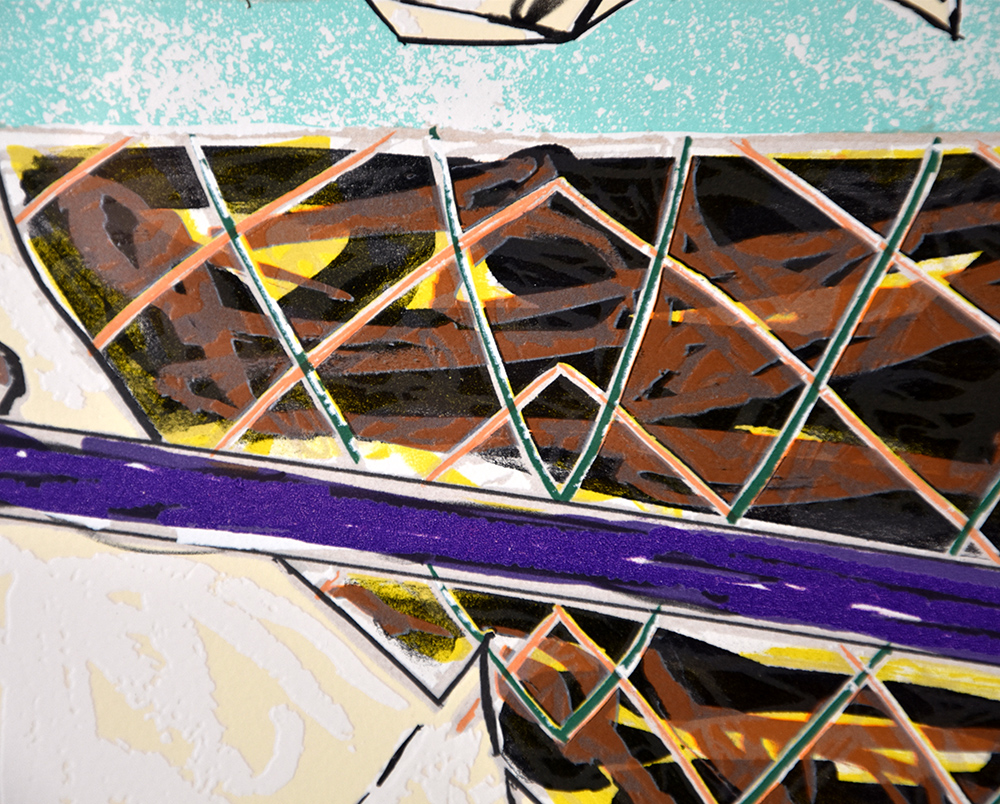 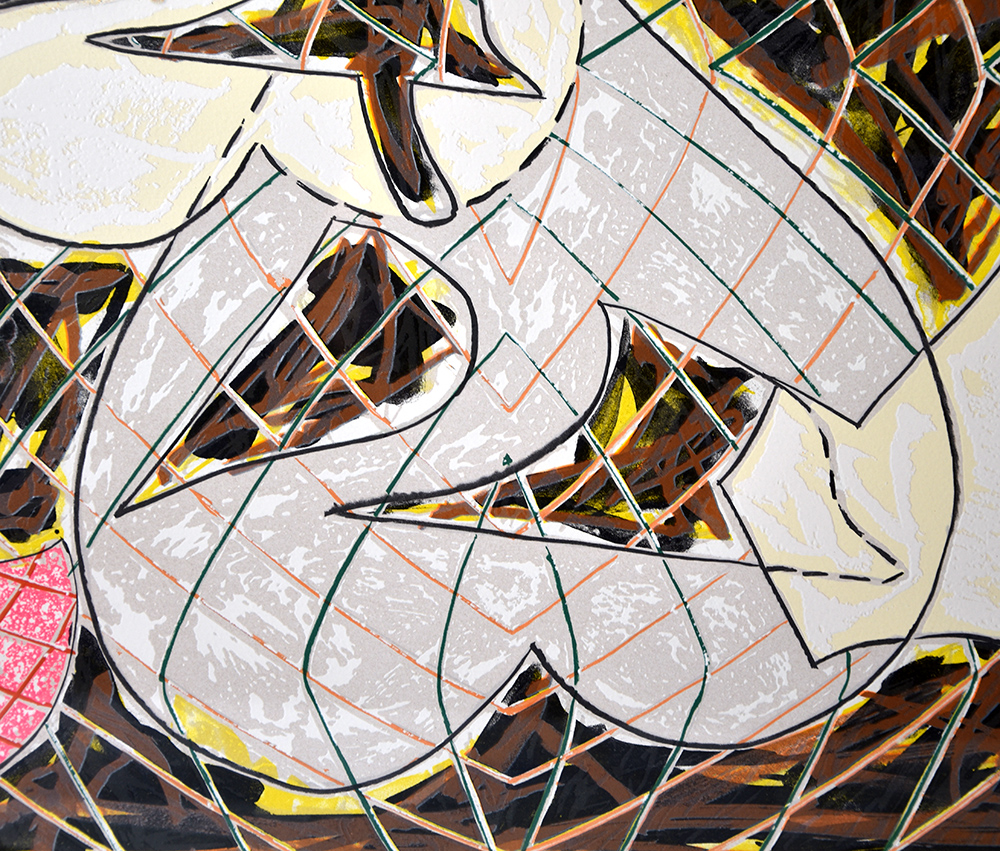 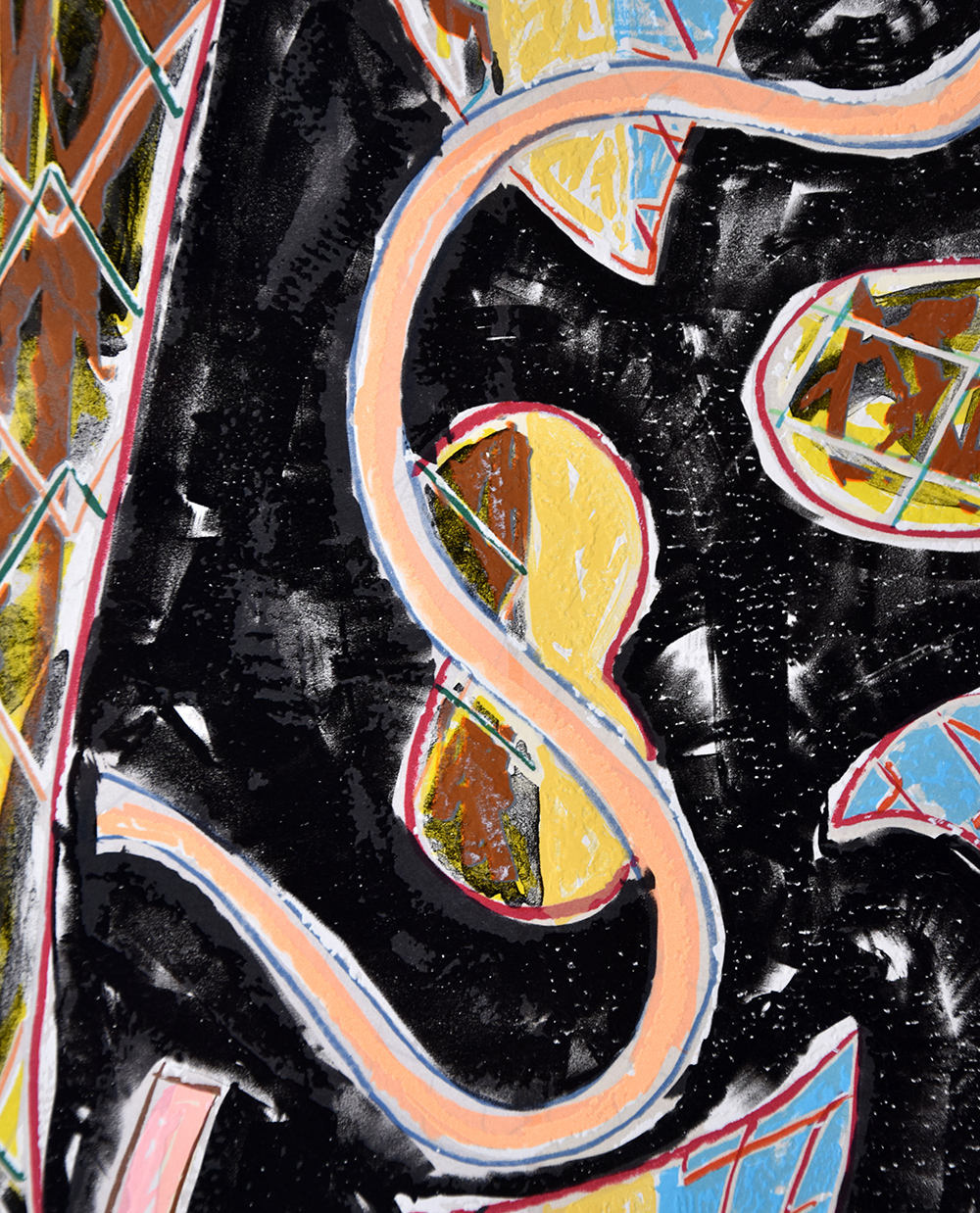 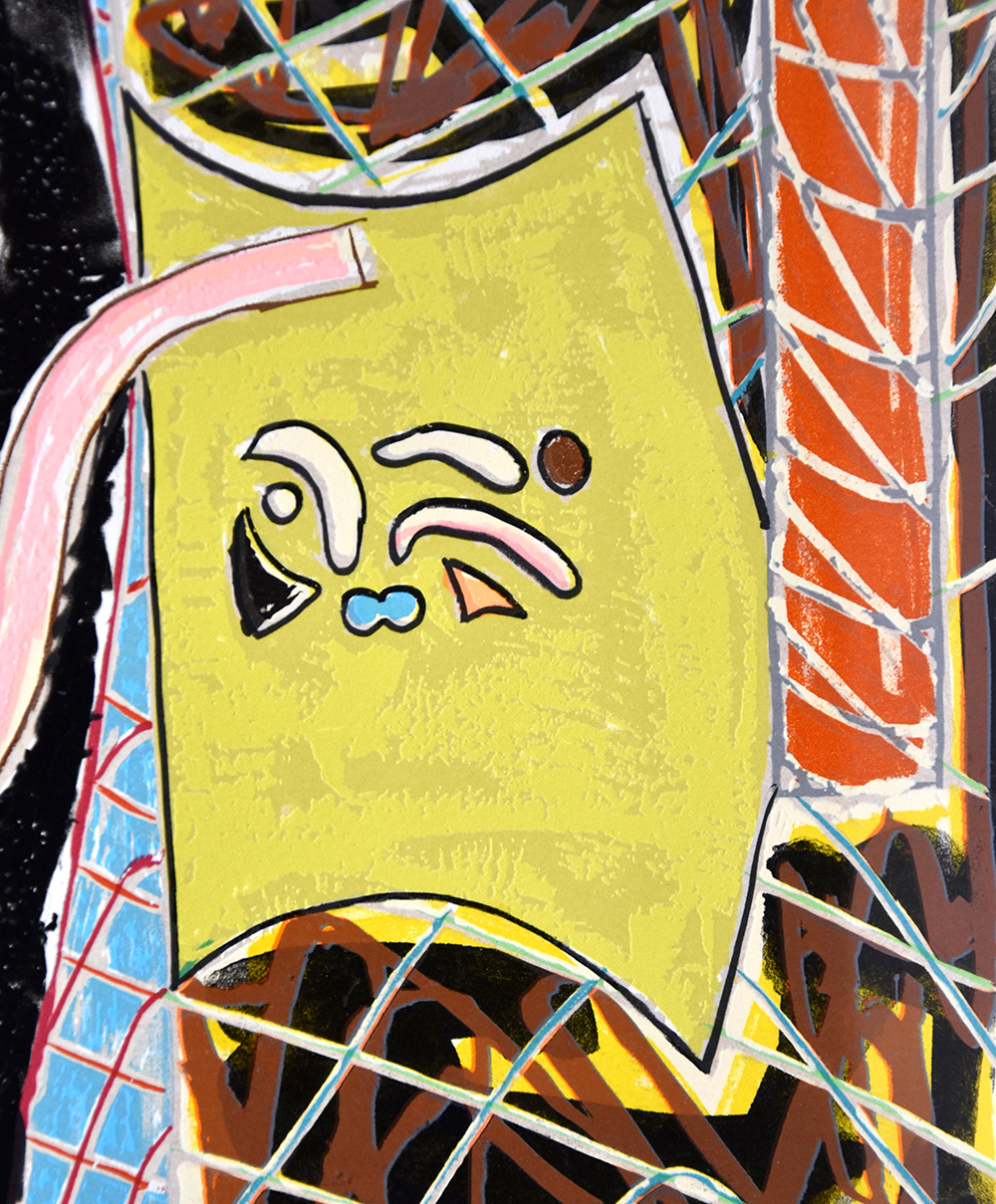 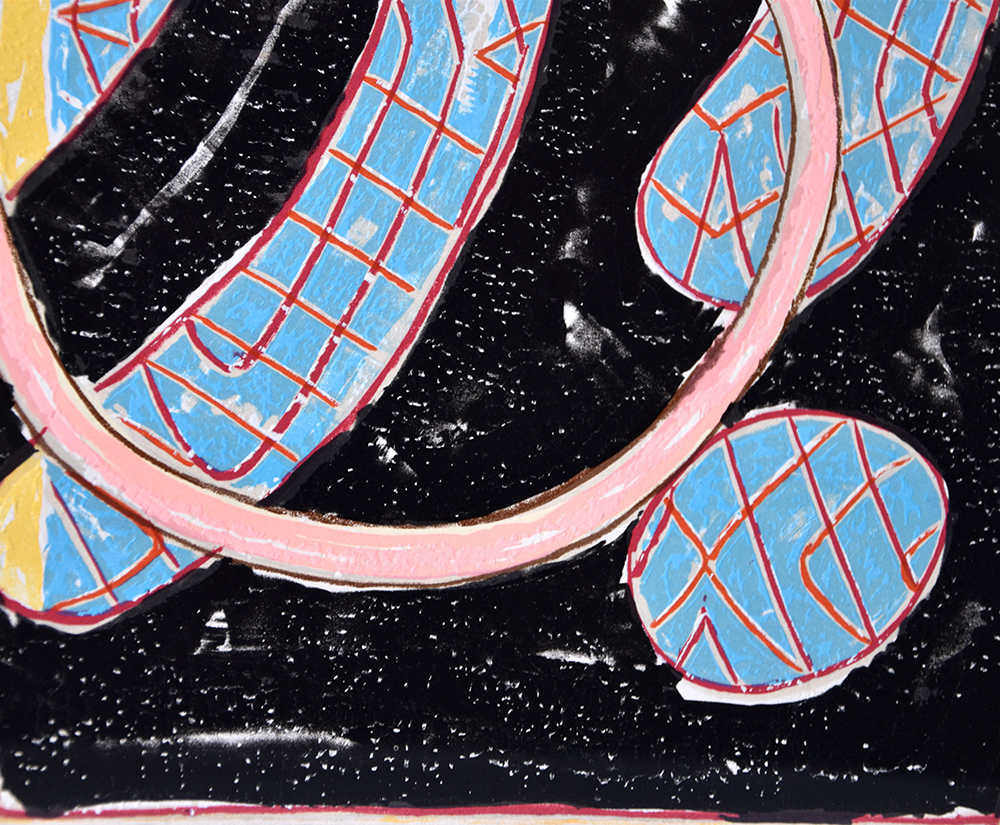 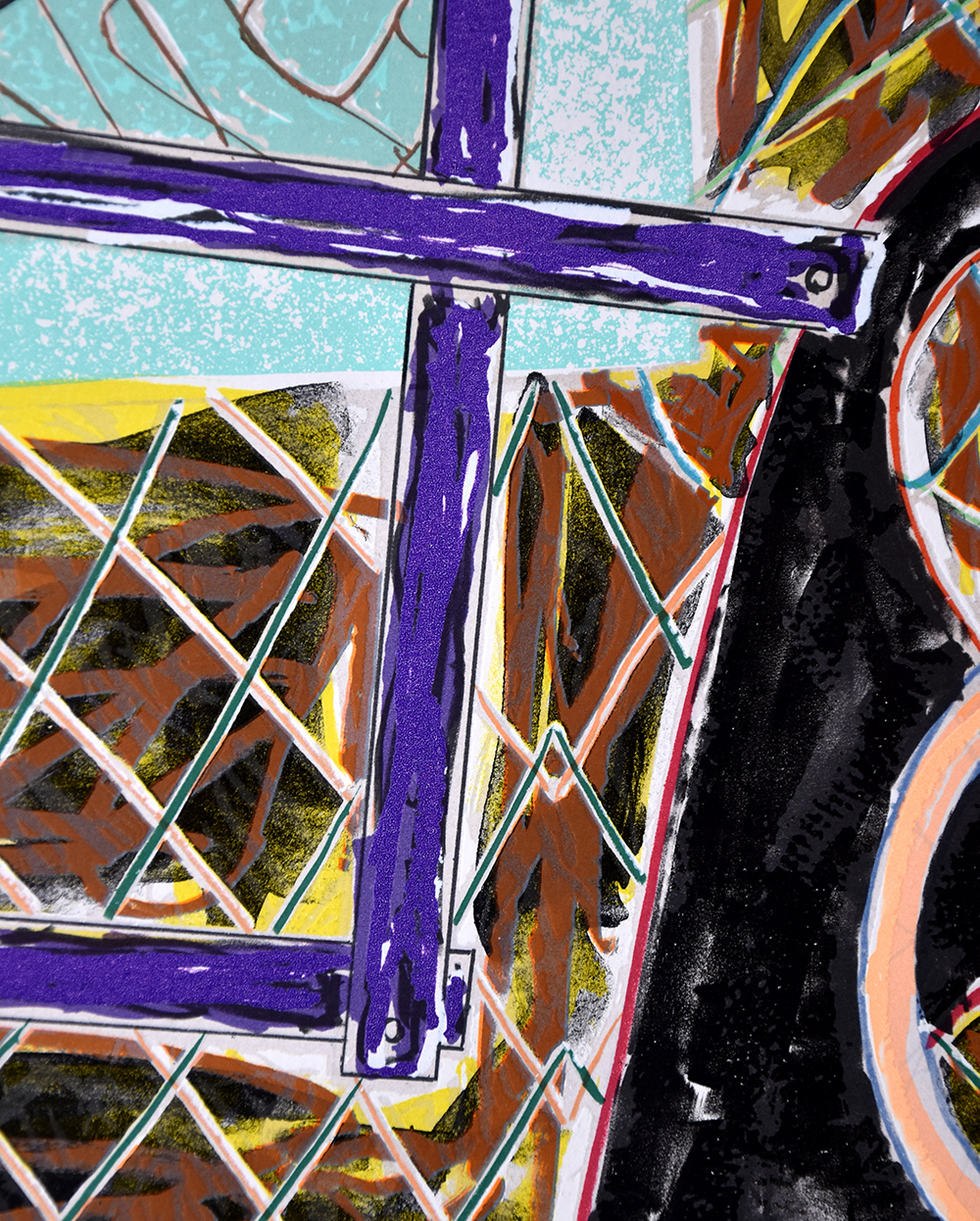 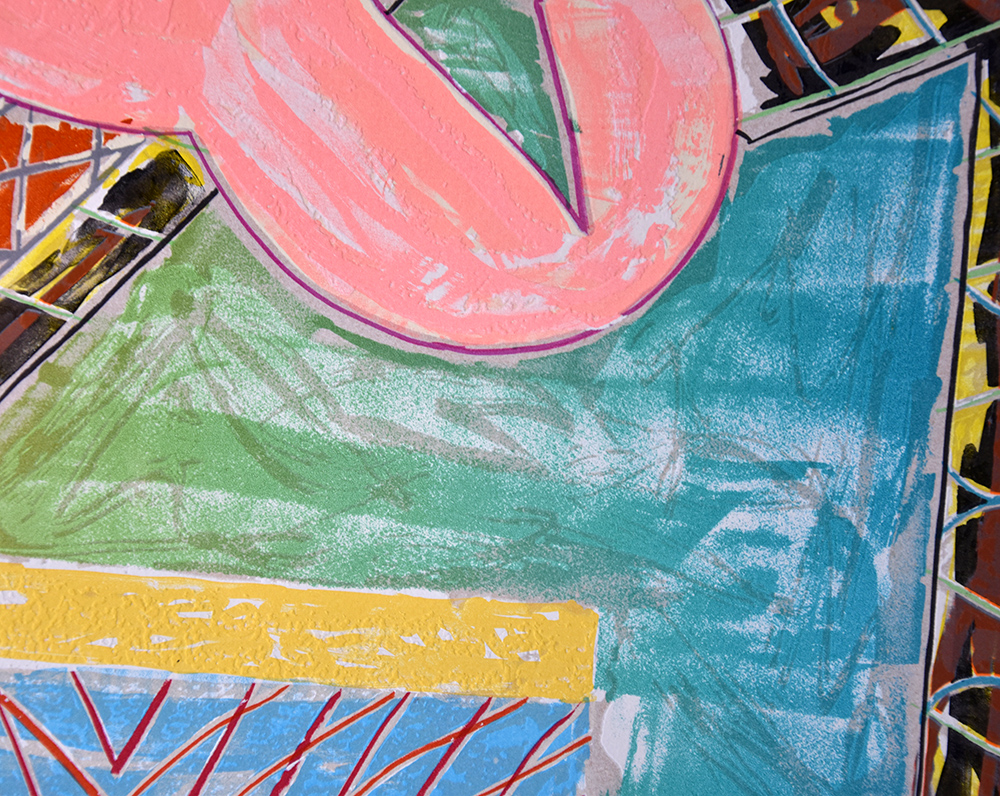 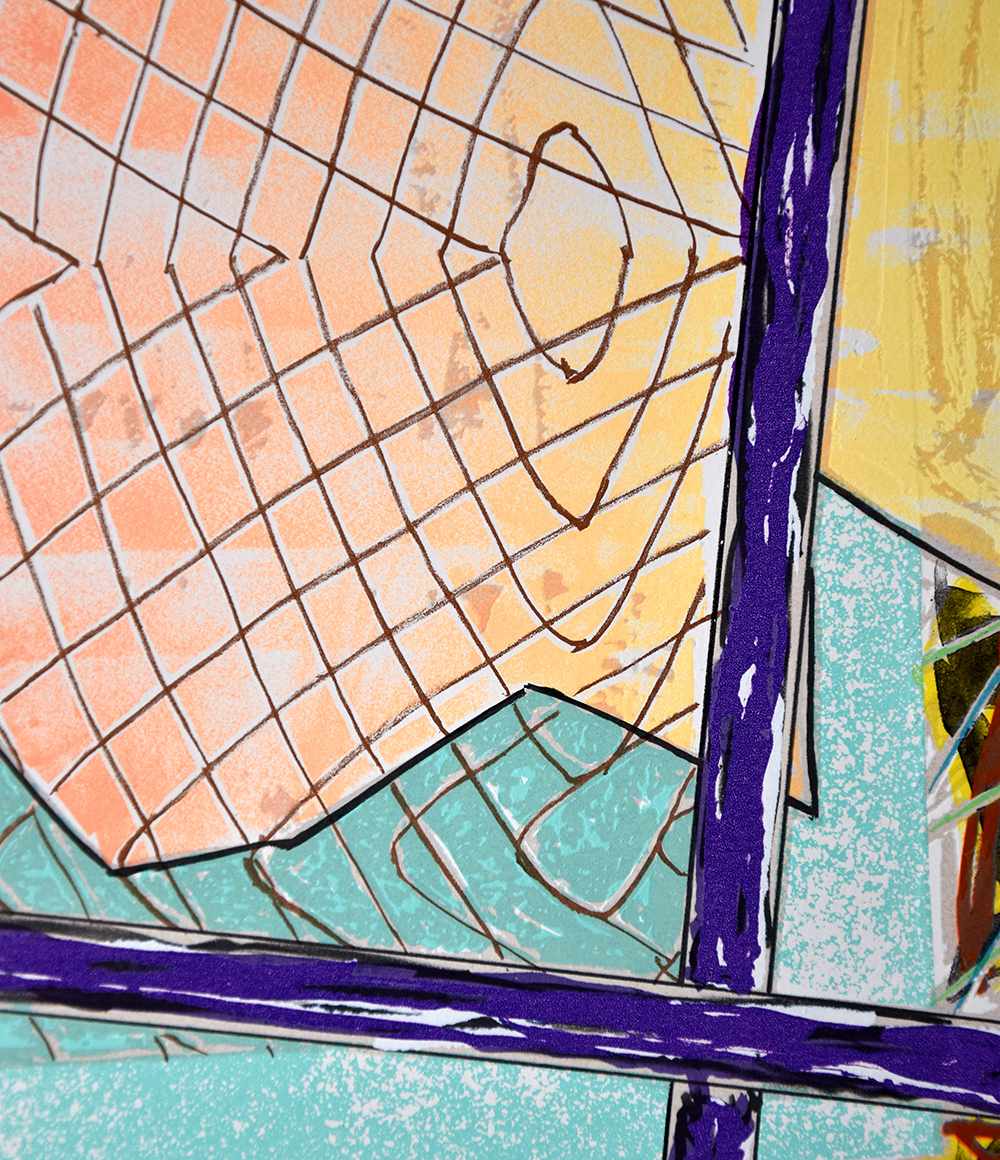 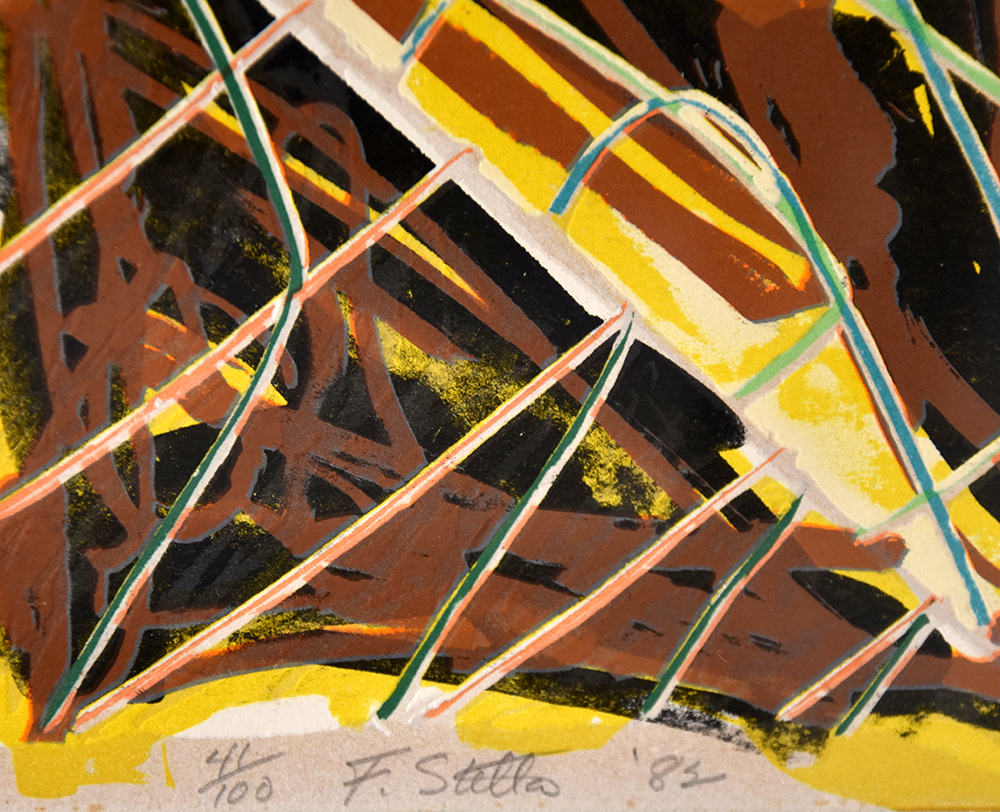 The second of five works from the Shards series, Frank Stella Shards II, 1982 is a multicolored and fragmented composition that pushes the limits of abstract art. Embracing the use of layered patterns, colors, forms, shapes, and textures, Stella presents a kaleidoscopic composition filled with movement. The background of this image is a flurry of burnt umber, jet black, and mustard yellow marks drawn in rough, expressive gestures. The crisscrossing blue angles to the left of the composition evoke the shape of a pantograph, which alludes to Stella’s method of creating the collage of forms in this image. Instead of creating the illusion of depth through light and shadow, Stella uses the careful placement of each fragment to add texture and three-dimensionality to what would otherwise become a flat composition. Frank Stella Shards II, 1982 offers a visual explosion of color and dynamic movement that attests to the groundbreaking techniques of the artist.

Created in 1982, this color lithograph and screenprint is hand signed and dated by Frank Stella (Massachusetts, 1936 – ) and numbered from the edition of 100 in pencil in the lower right. This work was published by Petersburg Press, New York.

Catalogue Raisonné & COA:
Frank Stella Shards II, 1982 is fully documented and referenced in the below catalogue raisonnès and texts (copies will be enclosed as added documentation with the invoices that will accompany the final sale of the work).

1. Axsom, Richard H. The Prints of Frank Stella: A Catalogue Raisonné. New York: Hudson Hills Press, 1983. Listed and illustrated as catalogue raisonné no. 145.
2. A Certificate of Authenticity will accompany this work.

About the Framing:
Framed to museum-grade conservation standards, Frank Stella Shards II, 1982 is presented in a complementary moulding with silk mats and optical-grade Plexiglas.