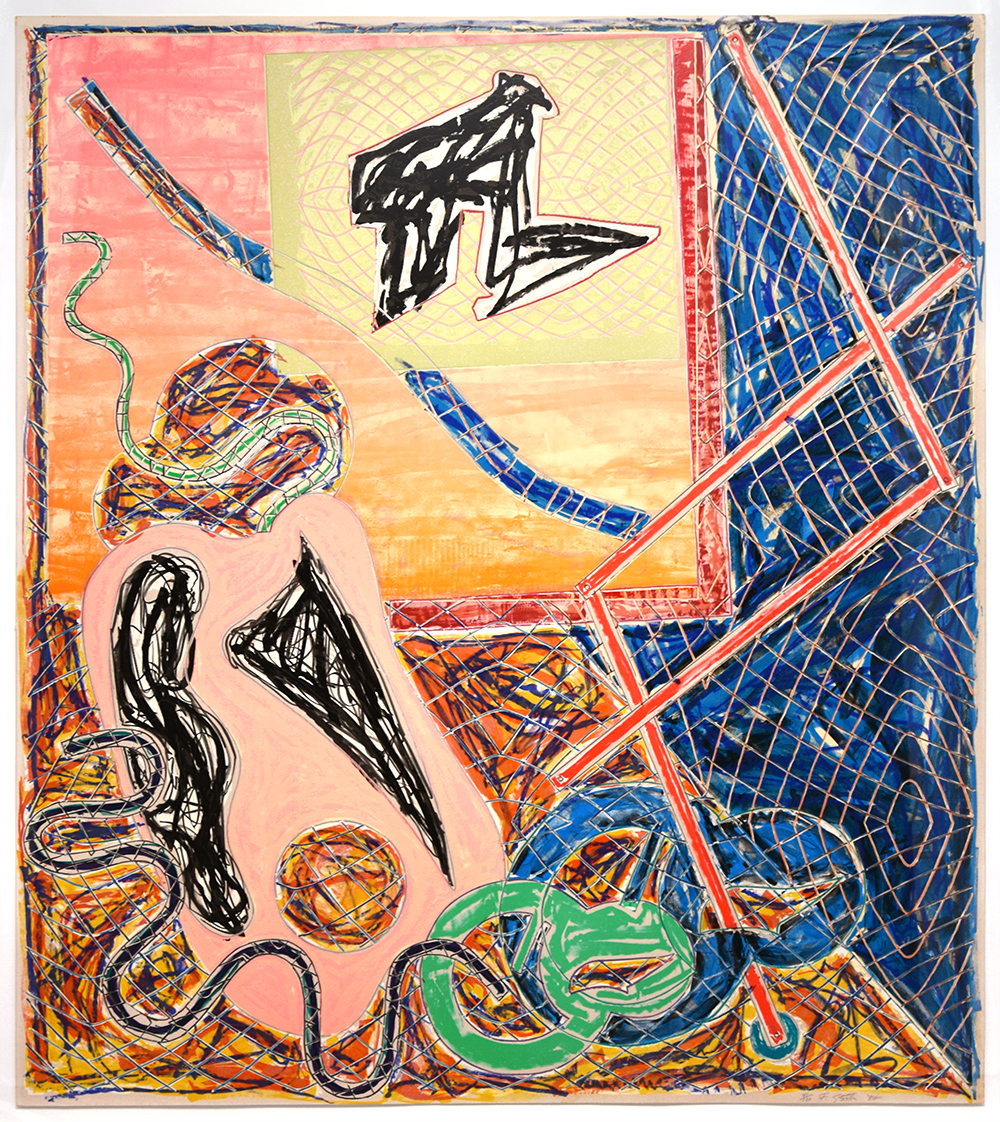 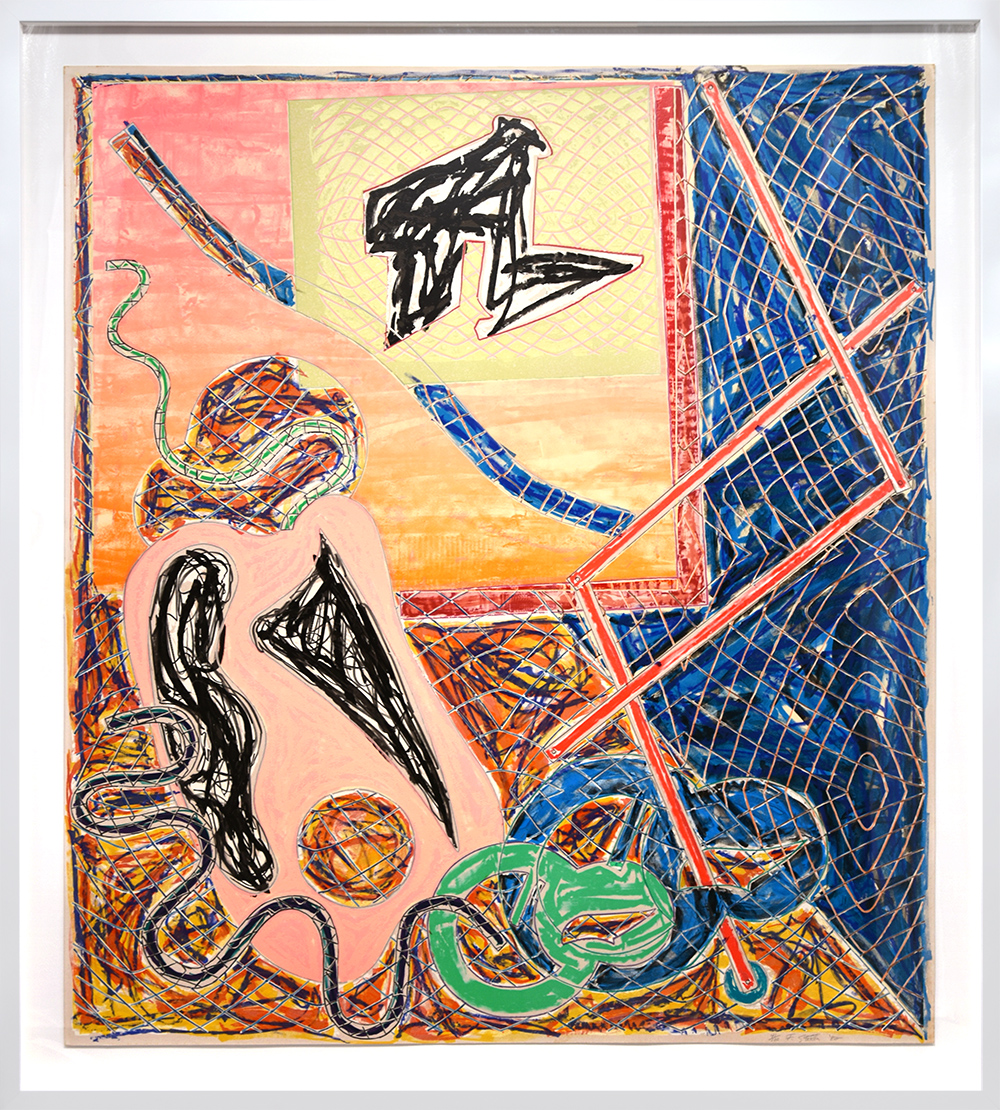 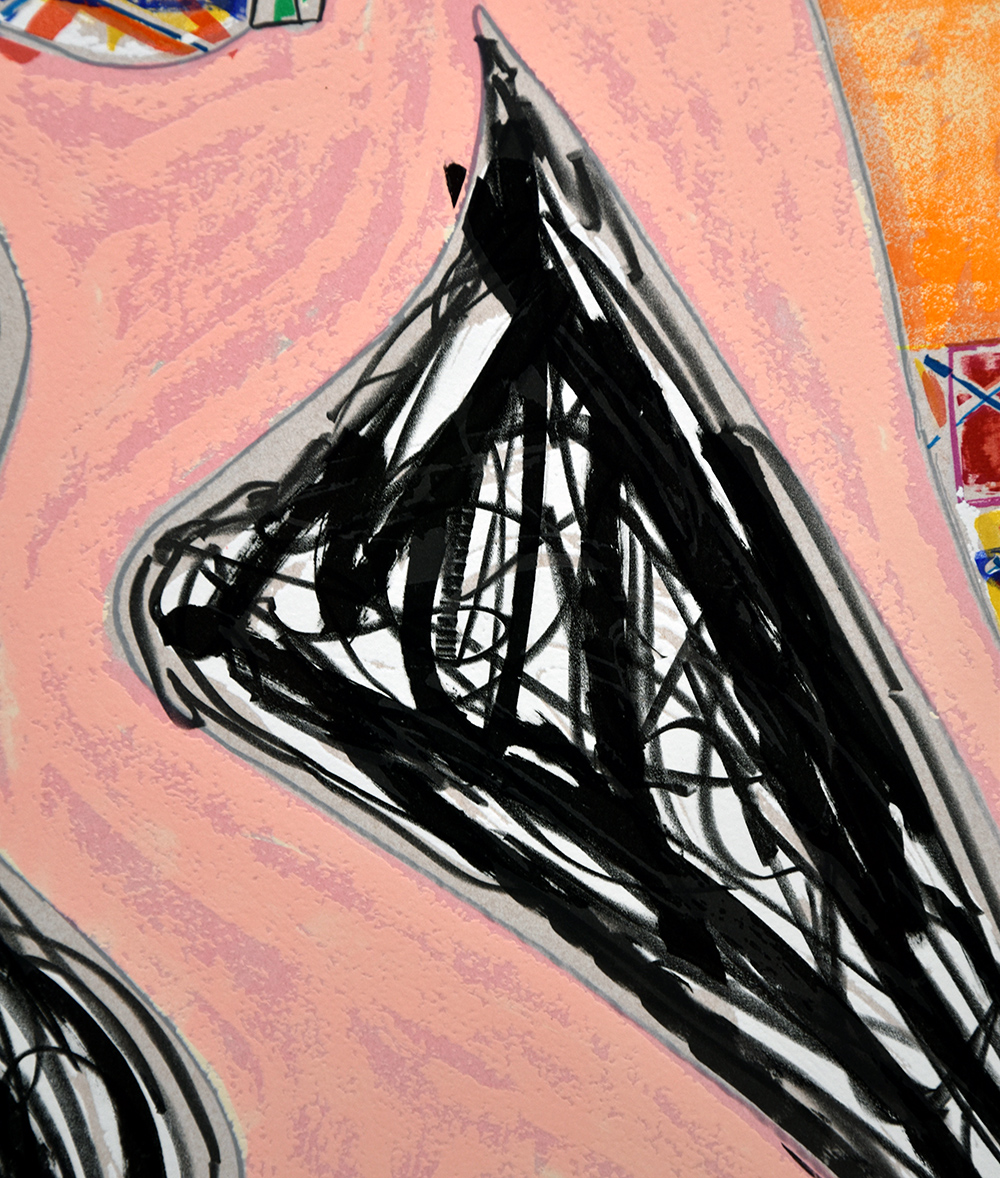 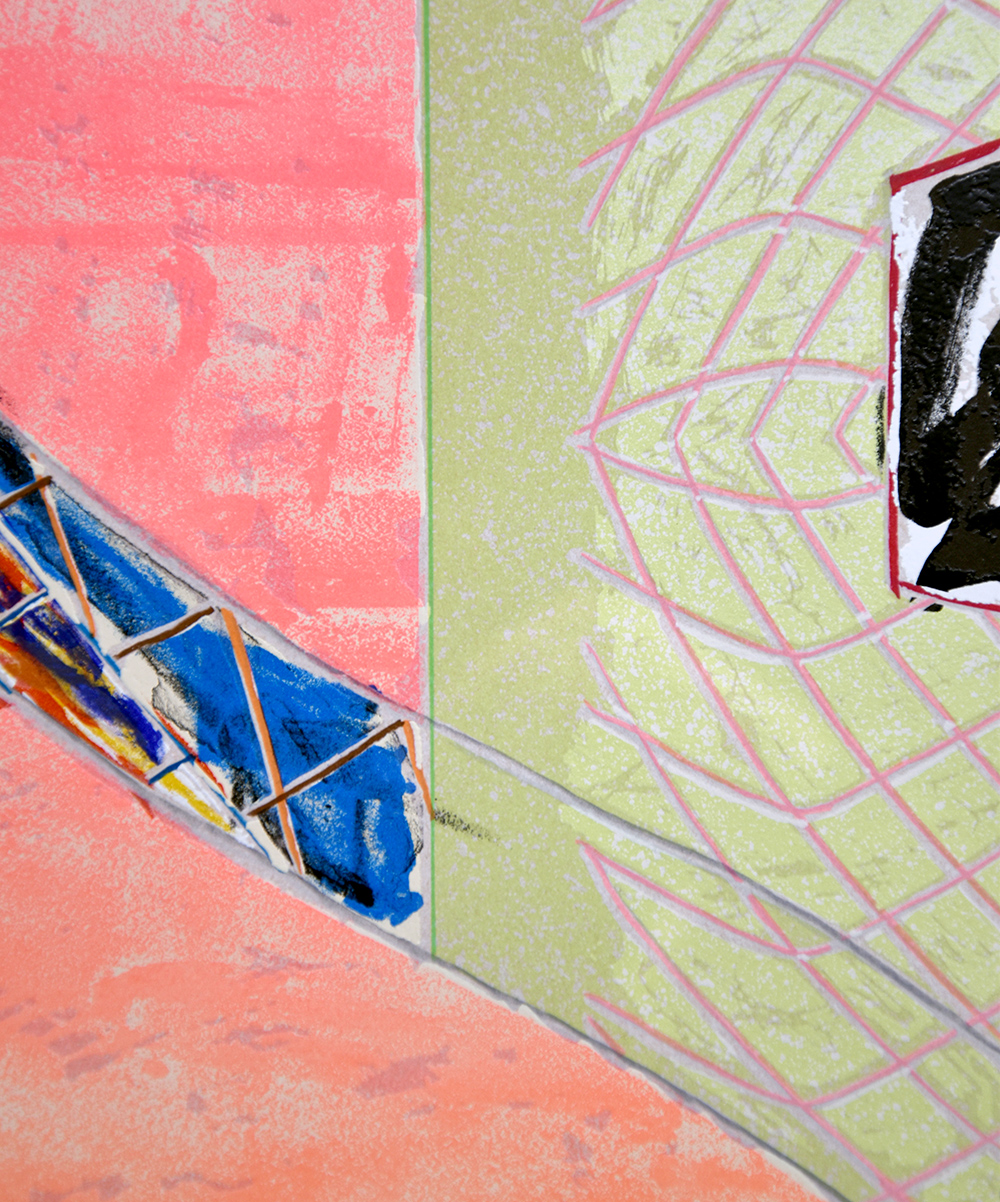 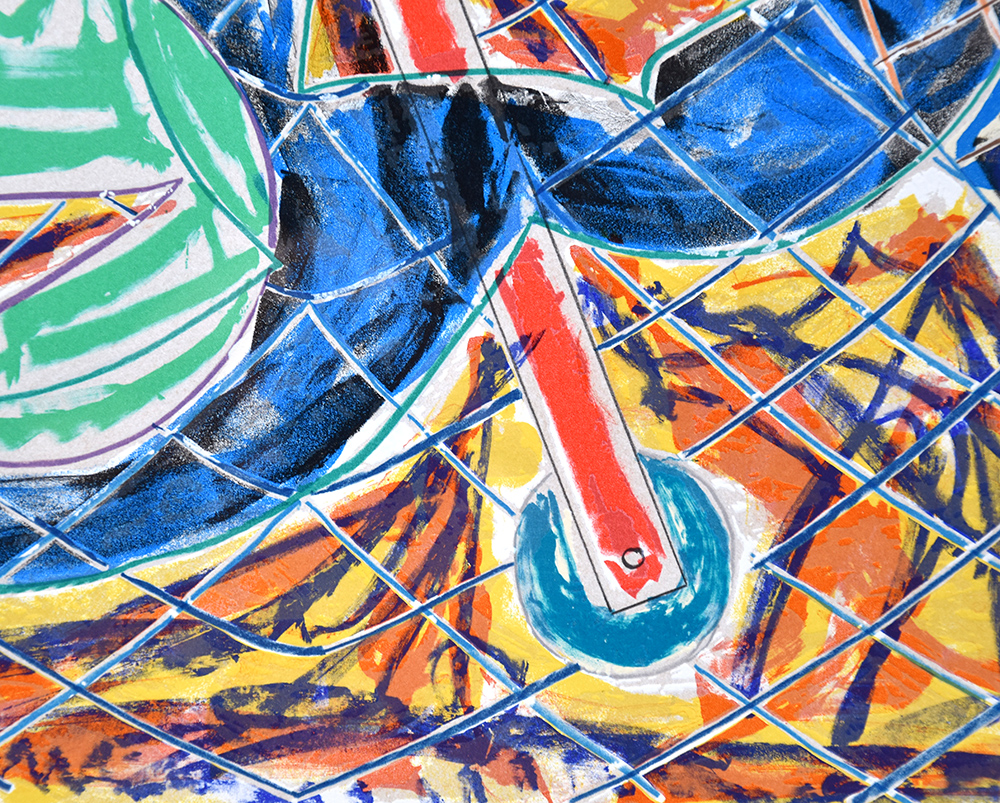 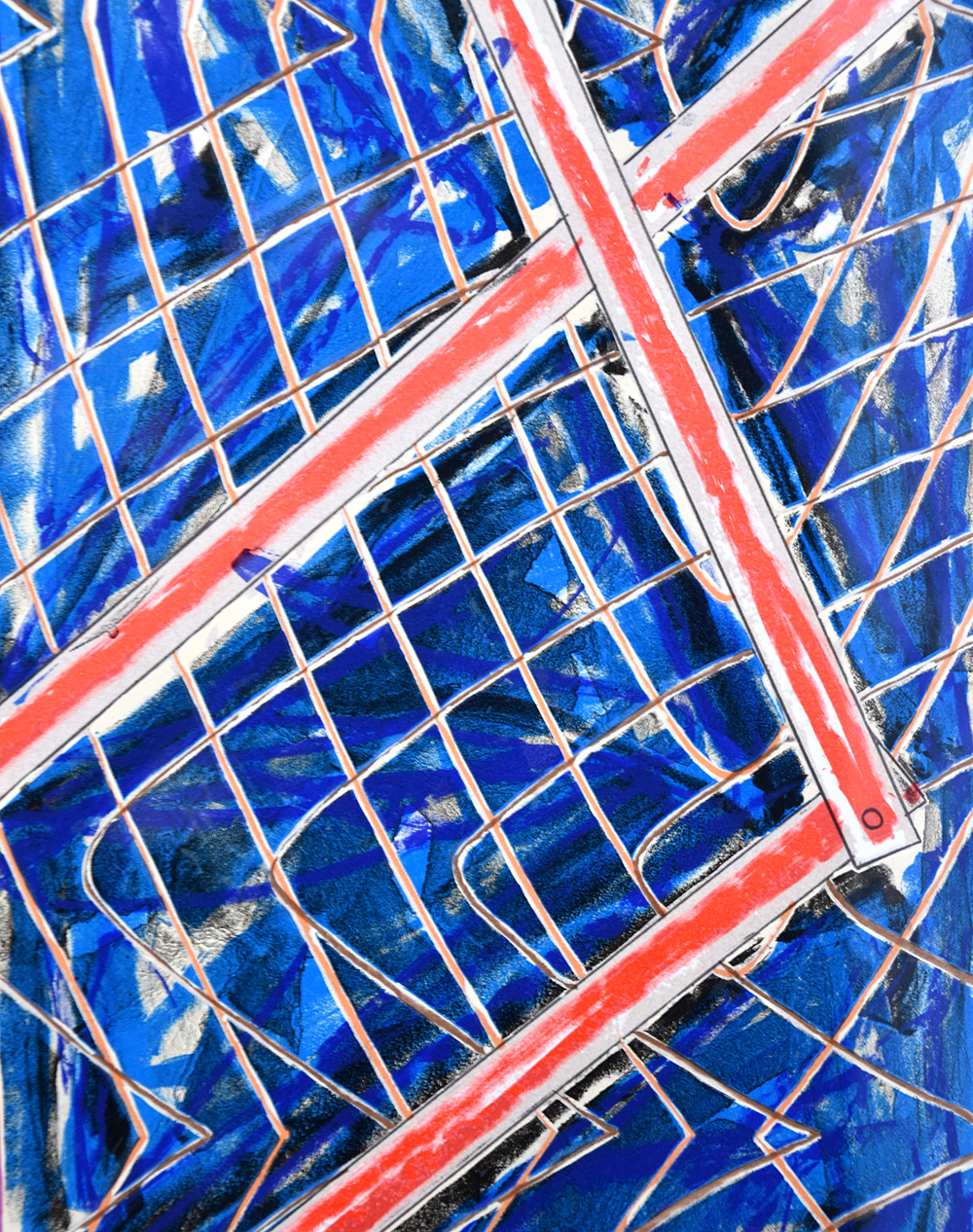 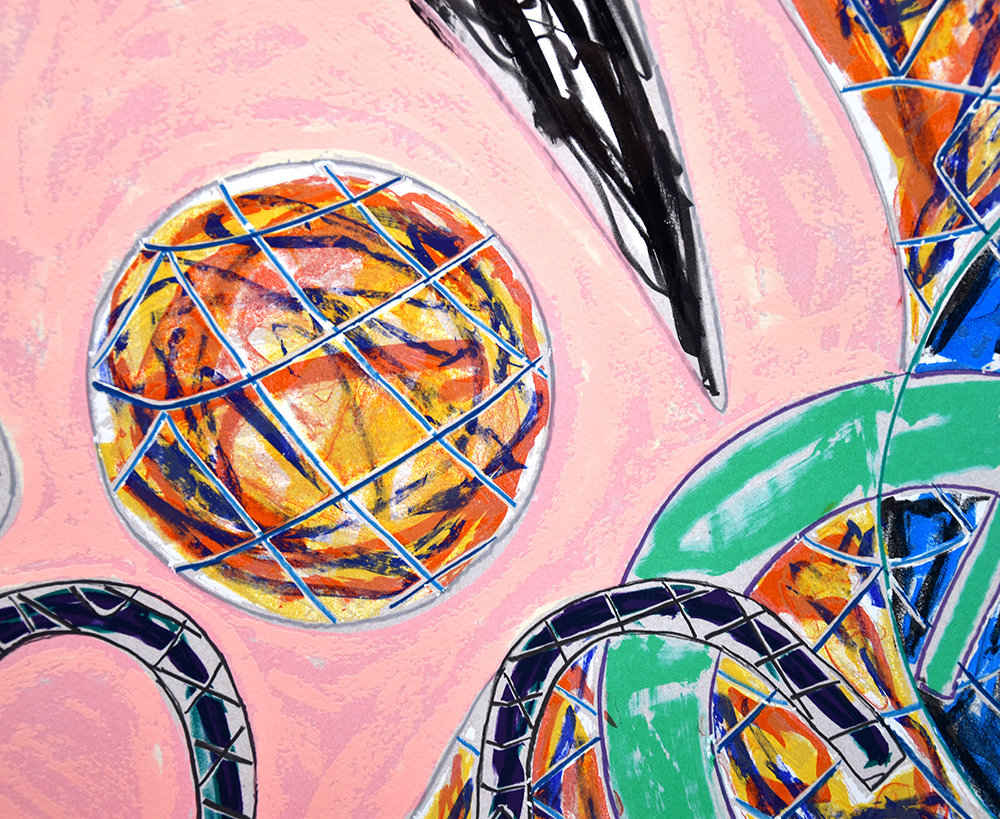 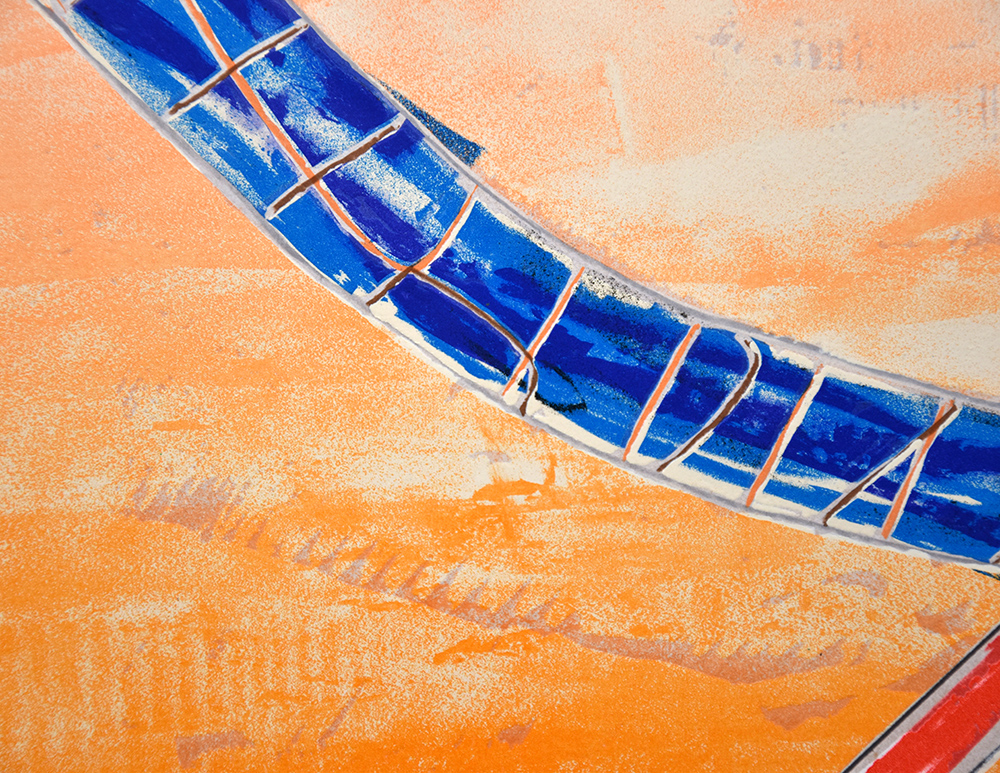 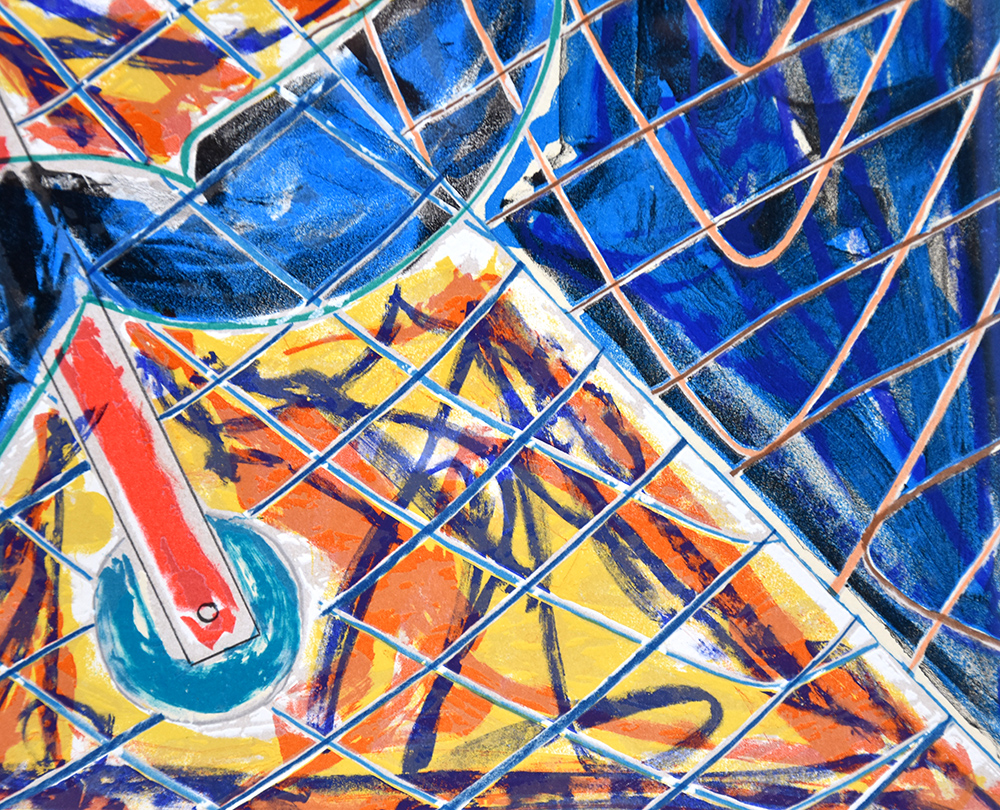 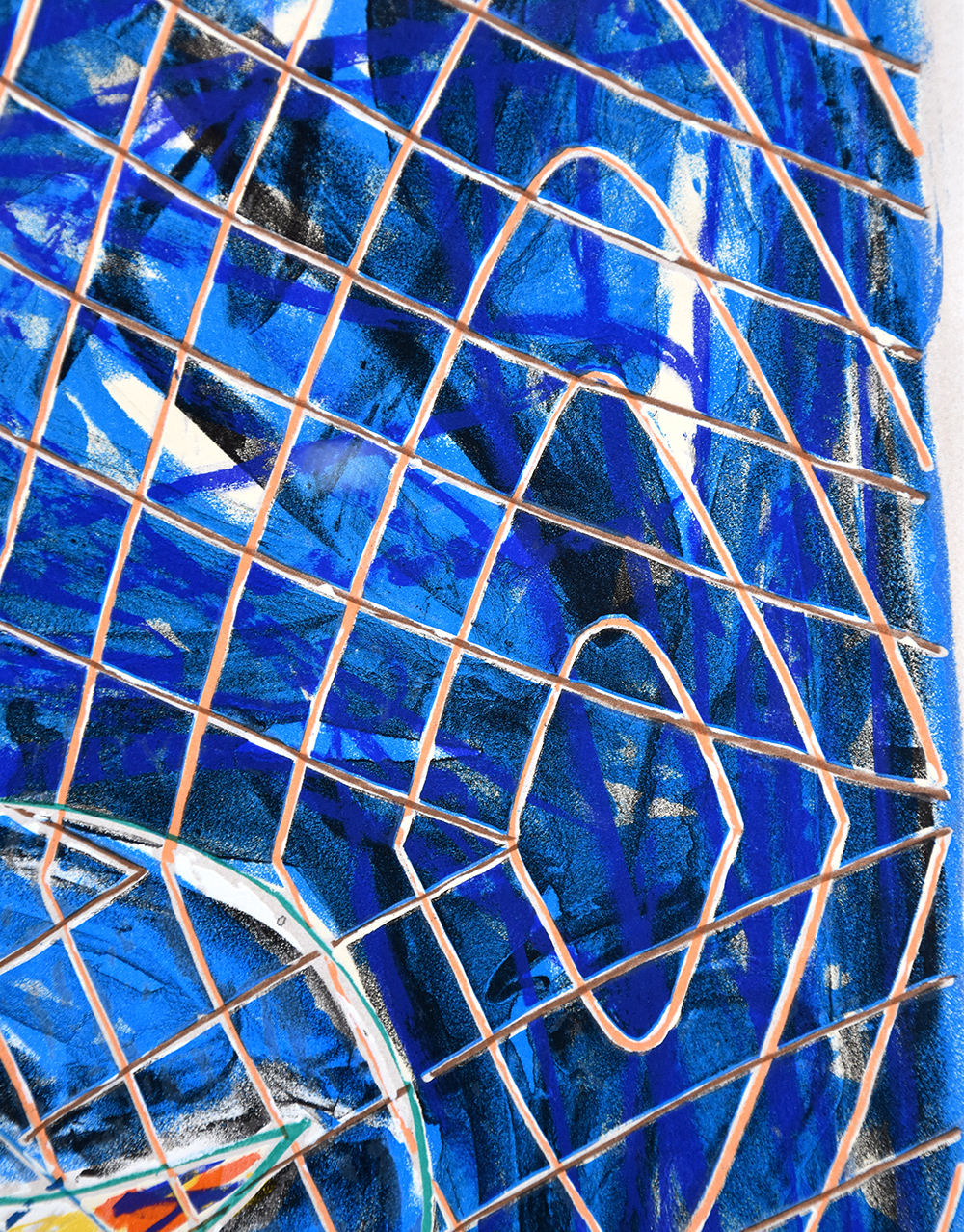 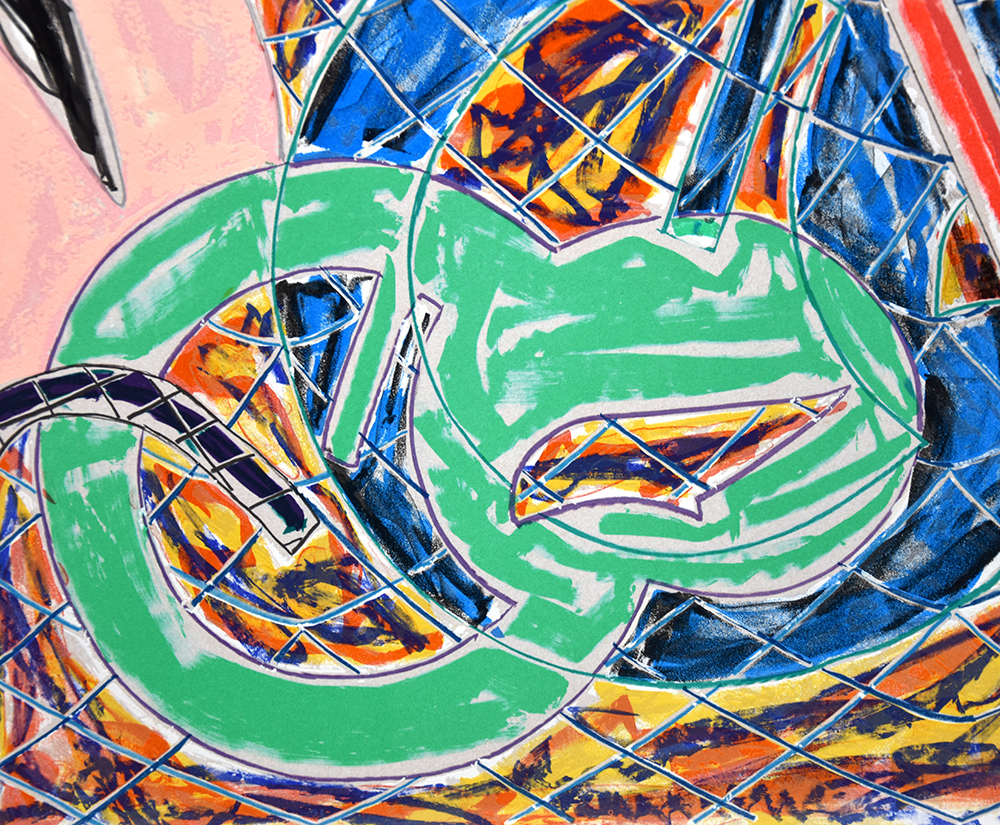 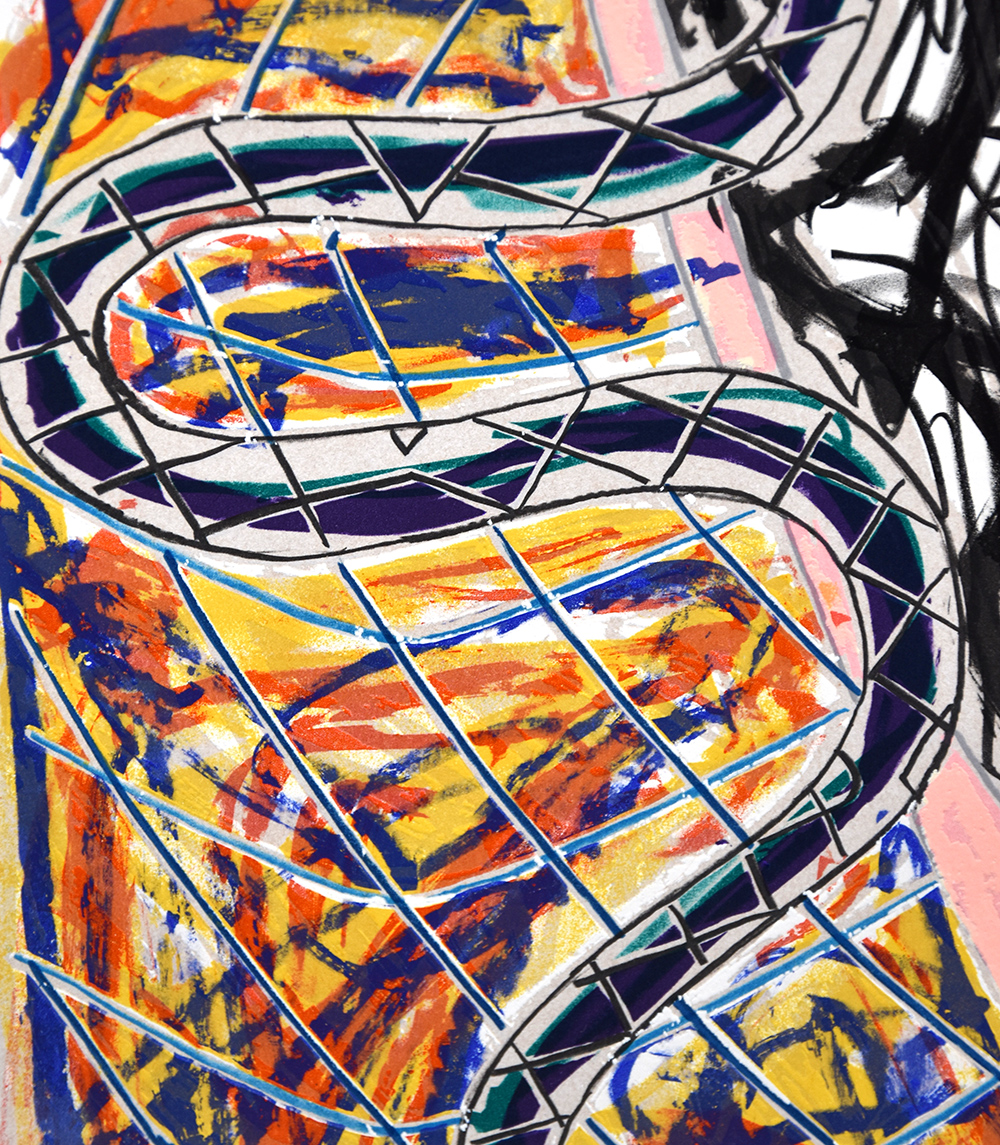 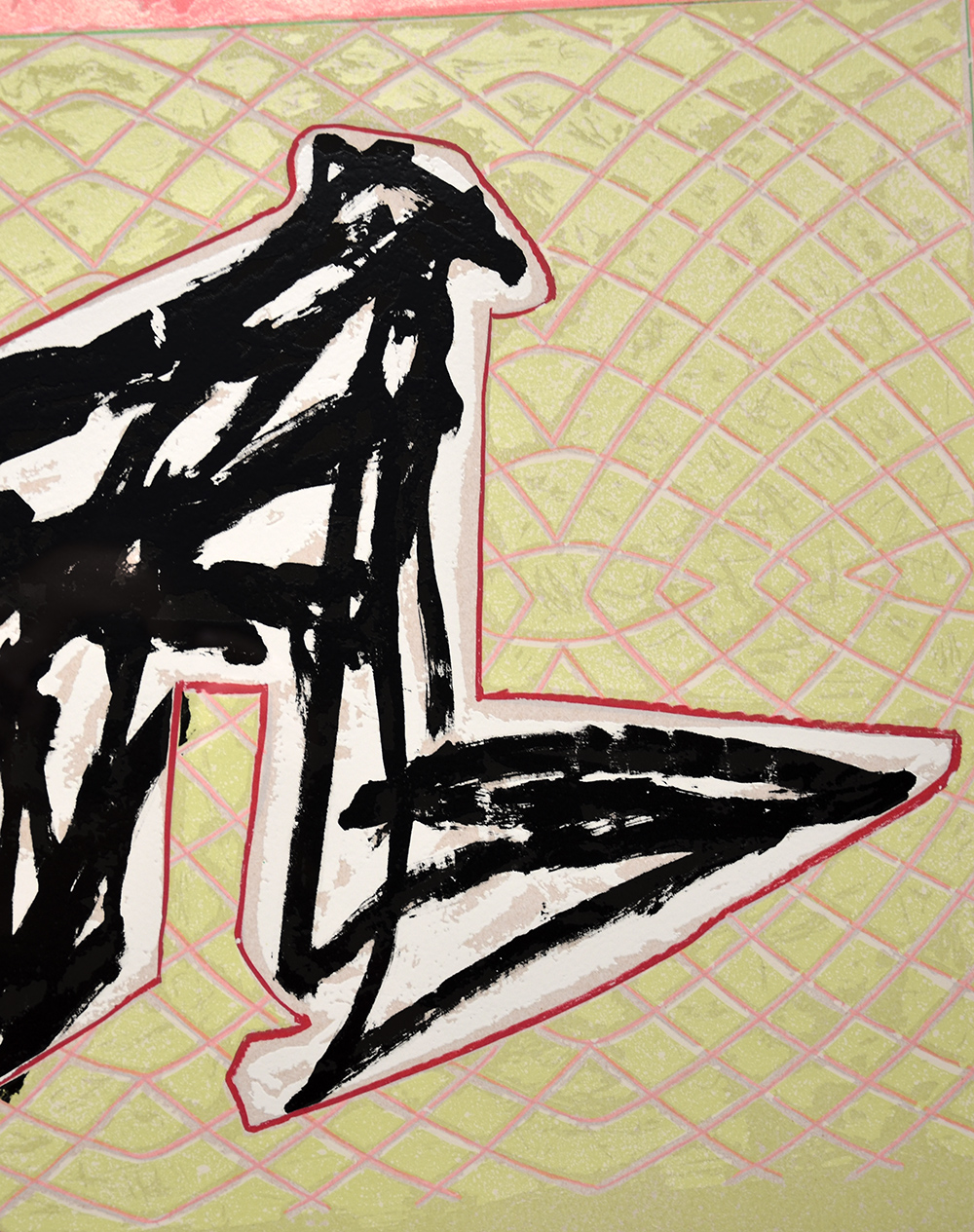 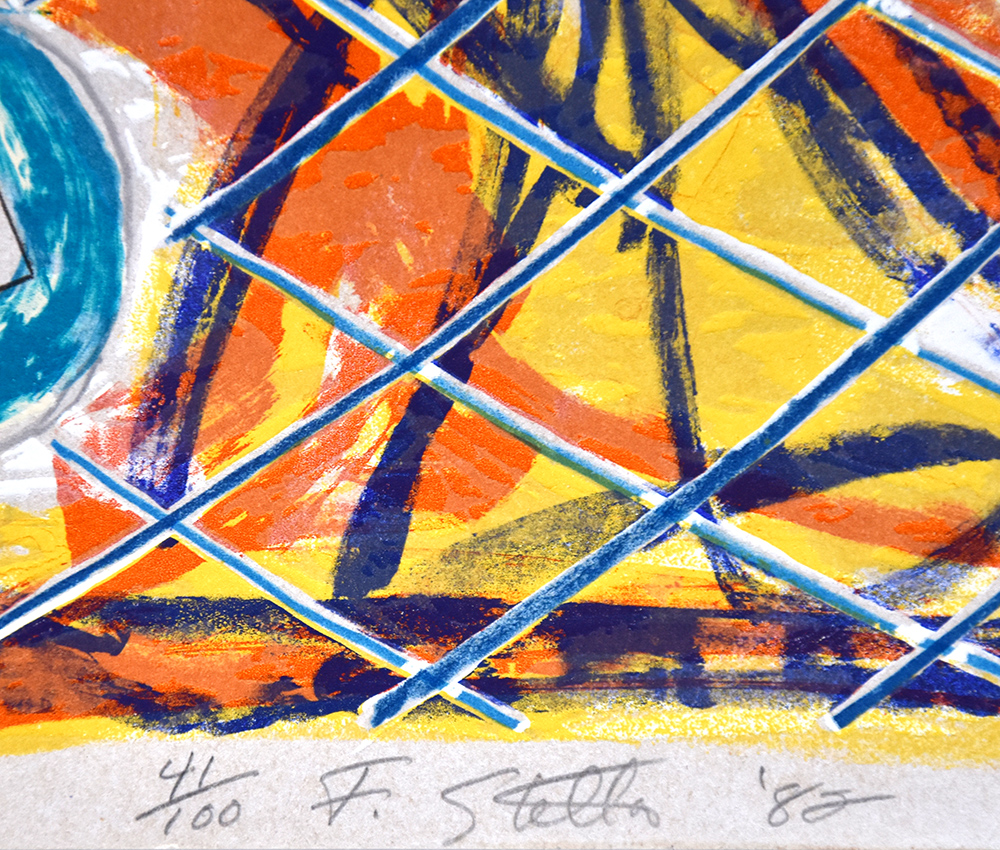 The first of five works from the Shards series, Frank Stella Shards I, 1982 features a beautifully complex amalgamation of hard-edge and organic forms rendered in vibrant hues. A patch rich cerulean blue covered in a netlike grid fills the right side of the composition, while a large square form fits into the upper left corner, and a slanting, table-like form occupies the lower half of the composition. Organic, undulating lines and shapes reside in the lower left corner and lie on top of the table-like form, creating the illusion of perspectival depth and three-dimensionality. The crisscrossing red angles to the right of the composition evoke the shape of a pantograph, which alludes to Stella’s method of creating the collage of forms in this image. Filled with contorting shapes and jarring colors, Frank Stella Shards I, 1982 is a hallmark of Stella’s iconic abstract style.

Created in 1982, this lithograph and screenprint is hand signed and dated by Frank Stella (Massachusetts, 1936 - ) and numbered from the edition of 100 in pencil in the lower right margin. This work was published by Petersburg Press, New York.

Catalogue Raisonné & COA:
Frank Stella Shards I, 1982 is fully documented and referenced in the below catalogue raisonnès and texts (copies will be enclosed as added documentation with the invoices that will accompany the final sale of the work).

1. Axsom, Richard H. The Prints of Frank Stella: A Catalogue Raisonné. New York: Hudson Hills Press, 1983. Listed and illustrated as catalogue raisonné no. 144.
2. A Certificate of Authenticity will accompany this work.

About the Framing:
Framed to museum-grade conservation standards, Frank Stella Shards I, 1982 is presented in a complementary moulding with silk mats and optical-grade Plexiglas.