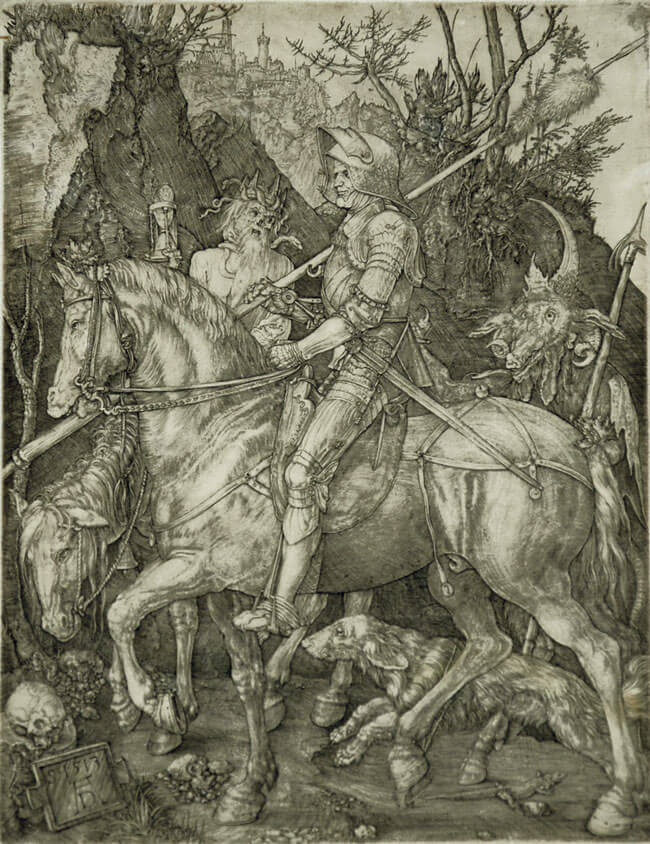 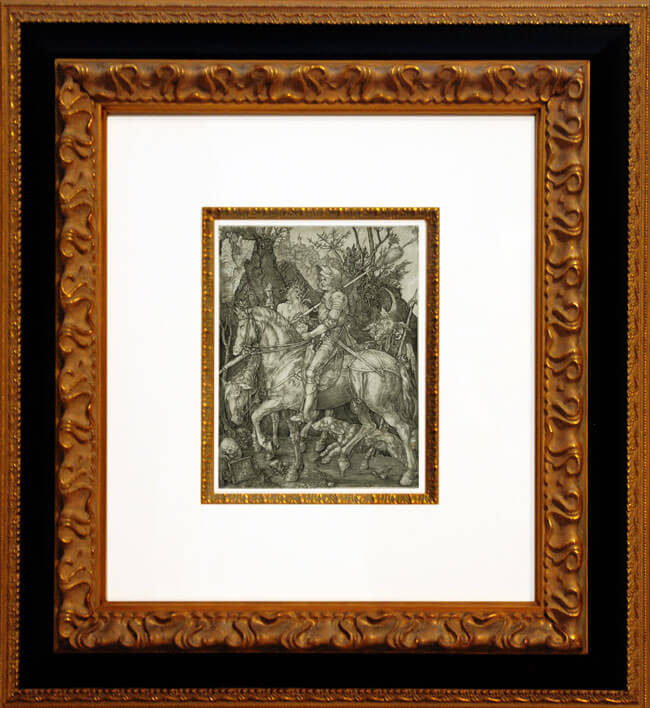 This incredibly intricate engraving, Knight, Death, & Devil, 1513 is a fine example of Albrecht Dürer's exquisite line work. His attention to detail, especially of light, breathes life into the fantastical scene so that the viewer is transported to a time long ago. The robust and handsome Knight is muscular and confident against the haunting foes that he dismisses. Miniscule crosshatching highlights the strength of his horse and the gleaming fur of his faithful dog. Behind him emerge looming, and dark creature and to his side an emaciated, watchful figure of death seated upon his own ghostly horse that bows to the Knight's presence. The scene is encompassed in the romantically luminous grandeur of the German country side, rich with vegetation and ridden with mystery.

According to Weber, this print was particularly inspired by a piece of literature by Dutch writer, Erasmus who published several Christian-inspired works during the early 16th century. Shedding some light onto its symbolism and meaning, the book, titled Enchiridion militis christiani states of the Knight, Death, & Devil:
So that you may not stray from the road of virtue, because it is rough and sad, and because the comforts of this world and the temptations of this world, the flesh and the devil must be overcome, remember this third rule: Pay no attention to the apparitions of terror and phantasy which may confront you at the gate of Hell, as did Aeneas. If you look upon these empty shadows with disdain and remain on the straight and narrow path with zeal and with care, you will overcome all evil.

Created in 1513, Albrecht Dürer included the letter 'S' preceding the date in his signature monogram tablet in the lower left. This stands for 'Salus,' or the equivalent of Anno Salutis, a form of dating frequently employed by Dürer about this time in his writings. This is considered to be a Meder (f) of (g) impression dating the piece to be mid 16th Century.

Catalogue Raisonné & COA:
This work is fully documented and referenced in the below catalogue raisonnés and texts (copies will be enclosed as added documentation with the invoices that will accompany the final sale of the work):

6. A Certificate of Authenticity will accompany this work.