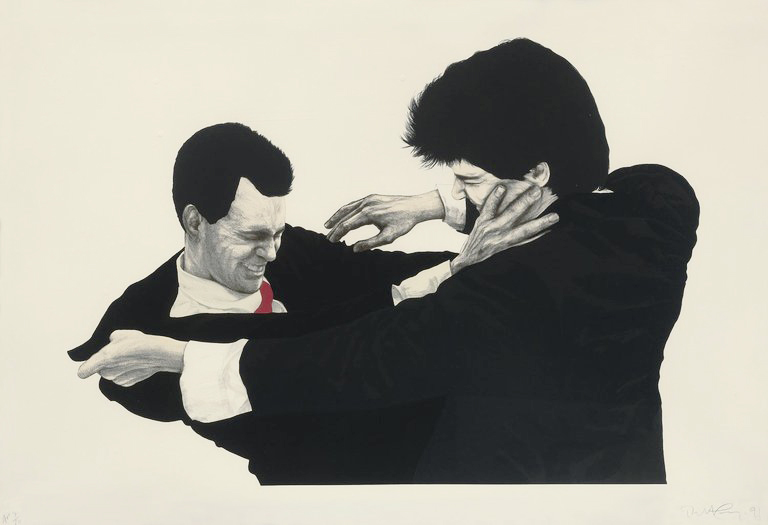 Robert Longo Frank & Glenn, from Men in the Cities, 1991 features the dynamic forms of two sharply-dressed men, pulling and pushing at one another, caught in a moment of amused roughhousing that is strikingly contrasted with their outward image. Their black suits melt into each other, combining the two even as their energetic hands and faces move away and around. The striking composition and the commonplace subjects lit up by their playful movement give the work a remarkable force that’s further strengthened by the graphic black and red color scheme.

Created in 1991, Robert Longo Frank & Glenn, from Men in the Cities is a lithograph. This work is hand-signed and dated by Robert Longo (New York,1953 - ) in pencil. This work is inscribed “AP 7/10” (Artist Proof); from the edition of 10 artist proofs.

Catalogue Raisonné & COA:
Robert Longo Frank & Glenn, from Men in the Cities, 1991 is fully documented and referenced in the below catalogue raisonnés and texts (copies will be enclosed as added documentation with the invoices that will accompany the sale of the work).

About the Framing:
Framed to museum-grade, conservation standards, Robert Longo Frank & Glenn, from Men in the Cities, 1991 is presented in a complementary moulding and optical grade Plexiglas.