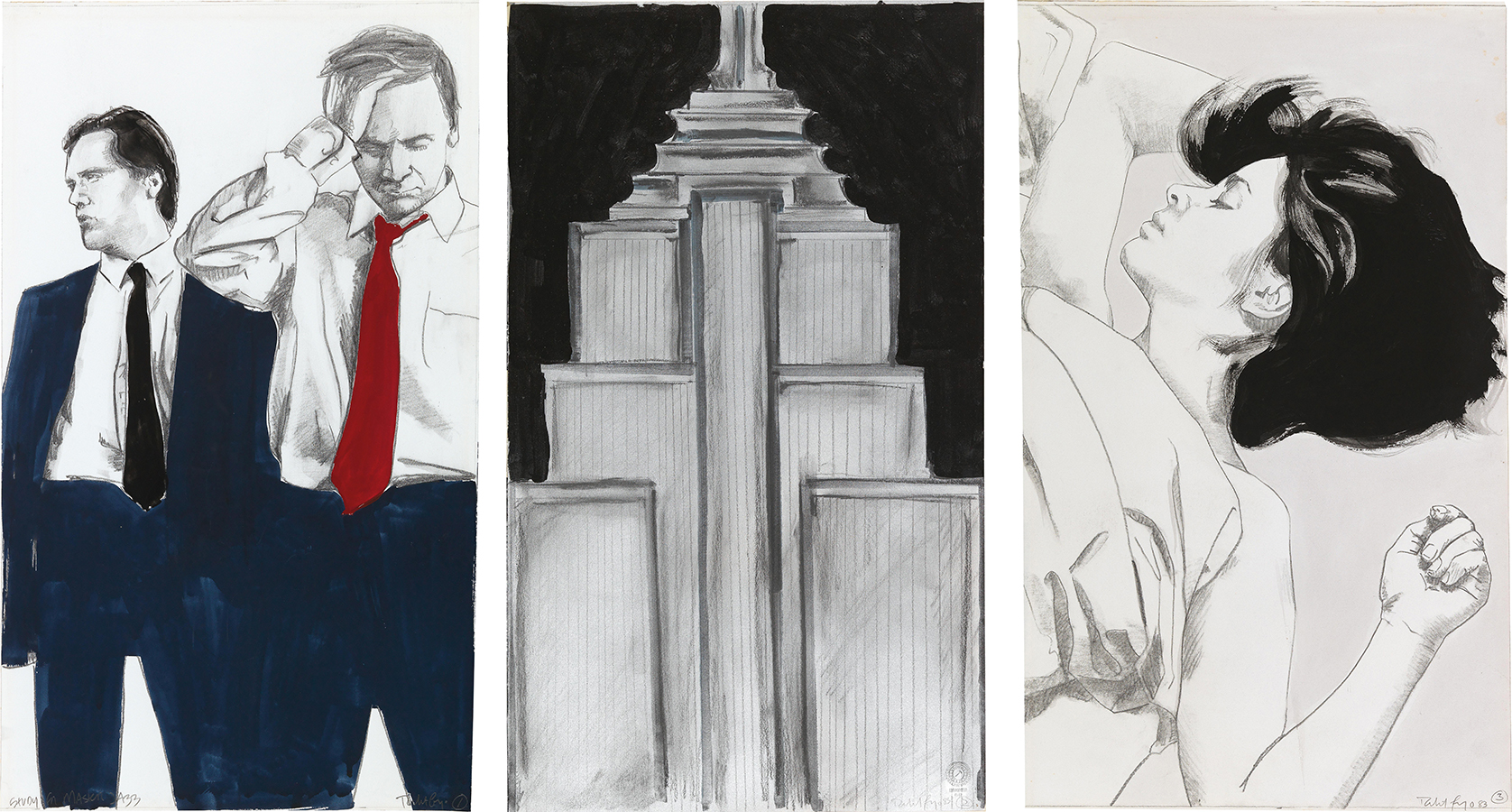 Robert Longo Untitled, 1983 is an enthralling triptych, presenting a visually sleek and enigmatic narrative. The center is ruled by the Art Deco form of the Empire State building, a ubiquitous symbol of big city bustling and an icon of the New York skyline. Rising up into a peak against a solid black background, the pared-down form of the skyscraper is windowless and silent. To its right, a pair of urbanites, dressed in minimalistic business attire (led by the eye-catching shape of a swinging red tie,) stand in poses of disquieting agitation. The dark navy of their slacks blend into one mass, uniting the men even as their body language hints at an anxious alienation. Their story is denied to the viewer, in the same way that the lack of windows on the Empire State Building deny the viewer a peak into the inner workings of the floors. The denial serves to further pique the curiosity of the narrative we’re watching unfold. The curiosity culminates in the last panel, depicting the diagonally arranged form of a woman, bedsheets crumpled around her body and her short jet-black hair fanned dishevel around her. The intimacy and vulnerability created by her pose and proximity to the viewer heightens the overall mystery of the triptych. Together, the three panels read like a sleek thriller, arousing feelings of alienation, secrecy, and restlessness. The limited palette of black, navy, and a singular stripe of red drive the mystery of the works, endowing them with a film-noire smartness. Longo’s sharp style and complex visual language is on full display in this intriguing triptych.

Created in 1983, Robert Longo Untitled Triptych is an original pencil, acrylic, and charcoal on Schoeller cardboard. This is a unique and original work composed of 3 pieces. Each piece is hand-signed and dated by Robert Longo (New York,1953 - ) in pencil in the lower right.

Catalogue Raisonné & COA:
Robert Longo Untitled, 1983 Triptych is fully documented and referenced in the below catalogue raisonnés and texts (copies will be enclosed as added documentation with the invoices that will accompany the sale of the work).

About the Framing:
Framed to museum-grade, conservation standards, Robert Longo Untitled, 1983 Triptych is presented in a complementary moulding and optical grade Plexiglas.