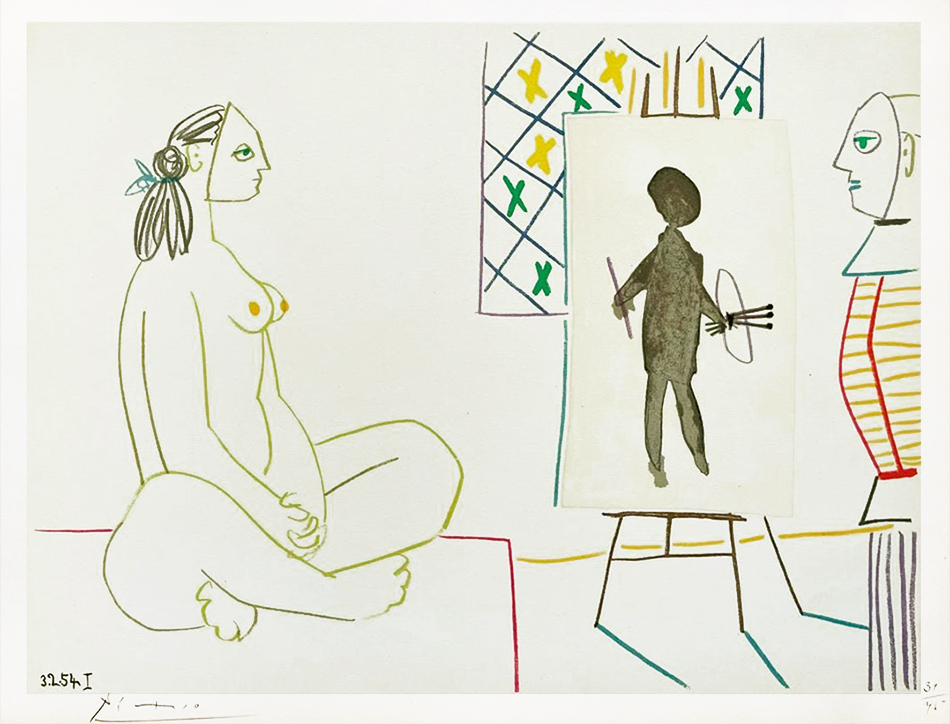 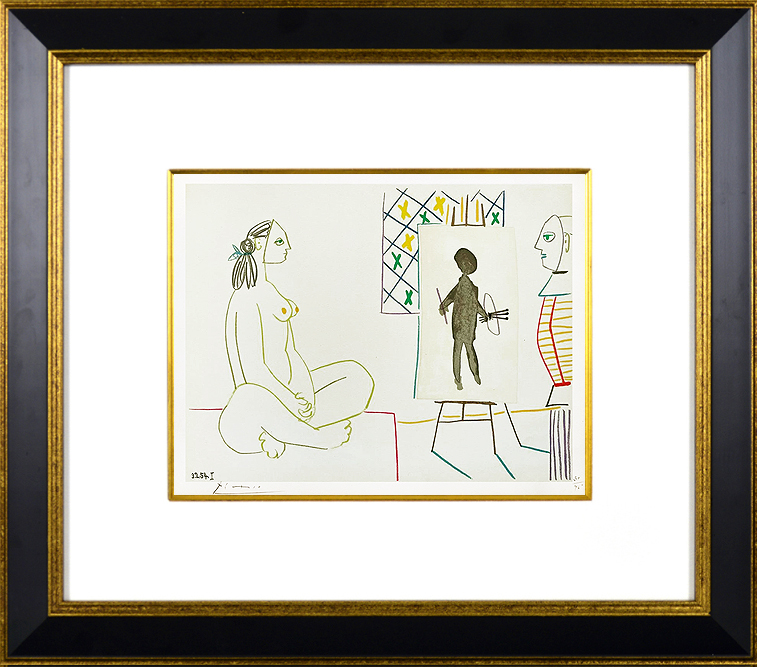 Peintre et Femme (Painter and Nude Woman), from Verve, 1954 is a warm and welcoming work of art with clean lines that accompany pleasant soft colors. In pastel shades of baby blue, creamy yellow, to moss green, Picasso sets a calming tone. To the right, the man in the mask bends his knees— eye level to his muse, a beautiful woman sitting crossed legged across him, also wearing a mask that covers her features. He stands before his canvas, which only shows the silhouette of a man holding a brush and an easel . It doesn’t take a lot for Picasso to render an intimate scene of two simplistically beautiful figures. The power and skills Pablo Picasso had is gracefully showcased through the clean lines, where our eyes easily navigate the scene and understand what is going on.

Peintre et Femme (Painter and Nude Woman), from Verve, 1954 was published in the winter of 1953-1954 in the French magazine Verve. Verve, an art magazine dedicated to bringing forth new ideas in French modern art published these drawings from which this particular work is based on. The Verve series depicts a visual journal of graphics that seemed to play a part of his own life memories. From emotionally charged scenes to more intimate scenes, the entire Verve series gives close insight to this master’s personal life.

Created in 1954, Pablo Picasso Peintre et Femme (Painter and Nude Woman), from Verve, 1954 is a color lithograph on wove paper hand-signed by Pablo Picasso (Malaga, 1881 – Mougins, 1973) in pencil in the bottom left. Numbered from the edition of 75 in the lower right, this work was published by Verve and printed by Mourlot, Paris.

Catalogue Raisonné & COA:
Pablo Picasso Peintre et Femme (Painter and Nude Woman), from Verve, 1954 is fully documented and referenced in the below catalogue raisonnés and texts (copies will be enclosed as added documentation with the invoices that will accompany the sale of the work).

About the Framing:
Framed to museum-grade, conservation standards, Pablo Picasso Peintre et Femme (Painter and Nude Woman), from Verve, 1954 is presented in a complementary moulding and optical grade Plexiglas.