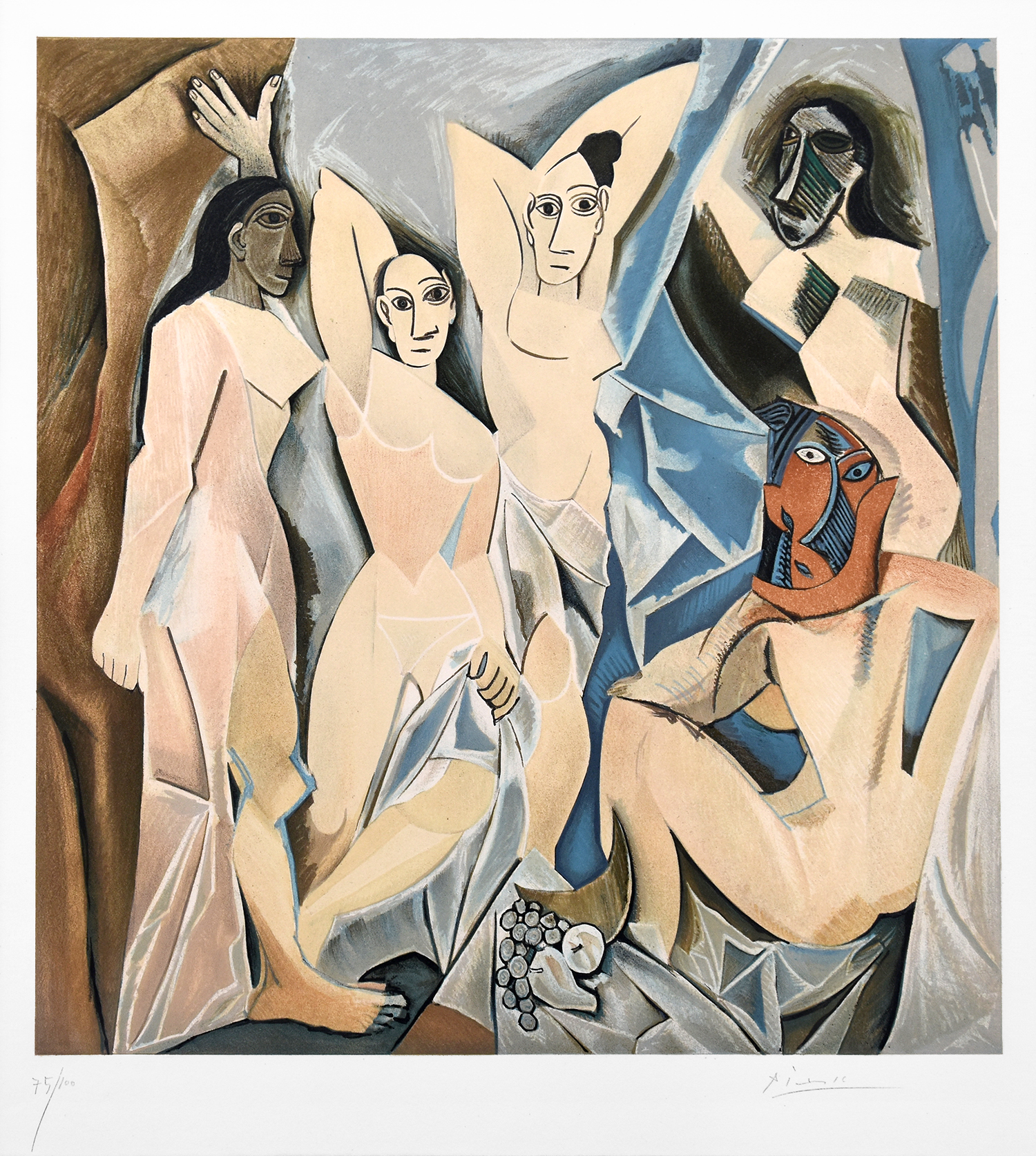 Pablo Picasso Les Demoiselles d'Avignon (The Young Ladies of Avignon), 1955 is a globally known work. Considered one of the most illustrious, important, and striking compositions that launched Cubism into the forefront of all art movements, Les Demoiselles d’Avignon is Picasso’s greatest, recognized work. Created after an original oil on canvas from 1907, the progression of these five women, abstracted through Picasso’s delicate hand, have heralded in most of modern art as we know it. In terms of classical art historical analysis, Picasso has broken barriers in the methodology of his color application, formation of line, and composition; the language of this work is, in itself, that of its own.

The successive turning of profiles in each of the women take us on a journey of how Picasso translated proportion into a combination of slanted angles and refraction of light; his color palette echoes a technique from his predecessor, Paul Cézanne, using passage which “involves extending the use of certain colors or shades belonging to a particular area by allowing them to spill into the neighboring area, thus ignoring the dividing lines, or the point where they might meet” (Palau 41). This passage coloration can be seen in the figure in the upper right corner (entering the scene) and also along the thigh and forearm of the second woman from the left.

According to J. Palau (1996), “Even if…the two figures on the right lead the way towards Cubism, this does not mean that the importance of the other figures is to be underestimated. It needs to be said at this point that the two-dimensional effect, which is later to become one of the features that early Cubism will strive to achieve or regain, is more successfully attained in Les Demoiselles than in some of the later works where the artist still seems to be struggling against three dimensions. In this respect Picasso is forced to fight as much against his formal education as against his sensual and possessive nature which tends to lean towards corporeality rather than flatness….In both of the figures on the right Picasso wishes to reach the absurdity of biological creation through art. The same dynamic is latent in the figure on the left, but if the anger and wrath caused by not achieving his goal is not so obvious in this figure, the plasticity with which he solves the problem is in some ways closer to Cubism”
(40).

Catalogue Raisonné & COA:
Pablo Picasso The Young Ladies of Avignon ( Les Demoiselles d'Avignon), 1955 is fully documented and referenced in the below catalogue raisonnés and texts (copies will be enclosed as added documentation with the invoices that will accompany the final sale of the work):

About the Framing:
Pablo Picasso The Young Ladies of Avignon ( Les Demoiselles d'Avignon), 1955  is framed to museum-grade, conservation standards, presented in a complementary moulding and finished with linen-wrapped mats and optical grade Plexiglas.