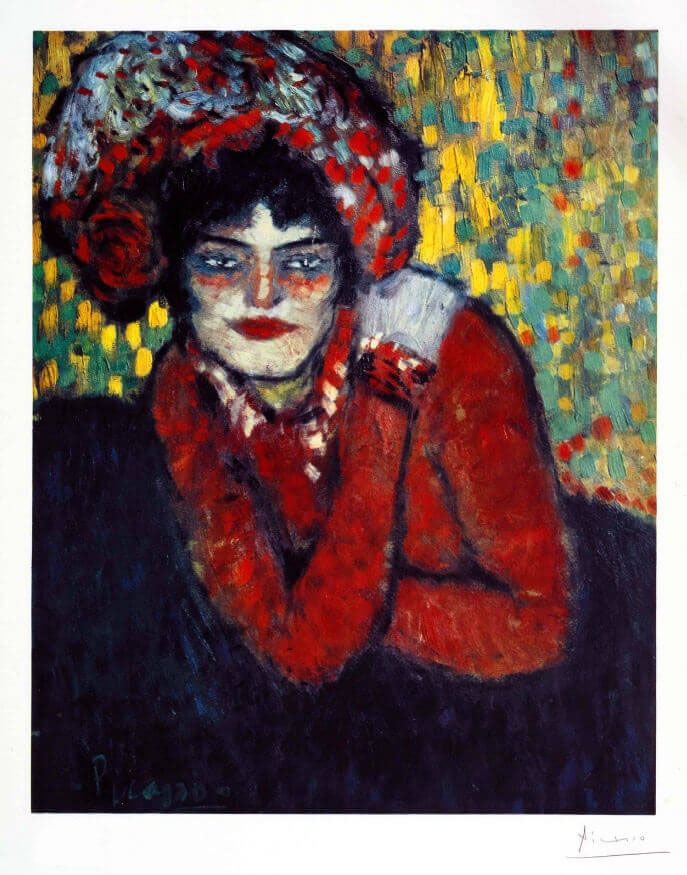 Pablo Picasso L’Attente (The Wait), 1966 showcases a confident, red-lipped woman leaning towards the viewer in this confetti-like print. Picasso uses color and brushstrokes to drive the composition, which is animated by an energy all its own. Full of deep tones and intensity of expression, this work depicts the early Parisian figures that contributed to Picasso’s paintings. Full of rich painterly texture and impressionistic use of color, this work illustrates the delicacy and grace the artist used to portray his female models in his earlier works.

Luis Carlos Rodrigo stated of the original painting, “This picture was undoubtedly painted by Picasso in Barcelona in 1901, as is remarked in the commentaries on The ‘Nana’, before his second journey to Paris with Jaume Andreu Bonsons, at the end of May, 1901. According to Daix, the woman in the work was Odette, whose real name was Louise Lenoir. Picasso, on his first journey to Paris with Casagemas had met three models through Isidro Nonell: Odette, Antoinette and Germaine, the last two sisters. Germaine Gargallo, the most scathing and also the most flirtatious, was the passion of Casagemas, but she ended by marrying Ramón Pichot, whom she also cuckolded. Later Picasso painted various pictures with Germaine, among them ‘Au Lapin Agile, Life’ and ‘The Dance’.” (Rodrigo 1,783)

Created in 1966, this color lithograph on Arches paper is hand-signed by Pablo Picasso (Malaga, 1881 - Mougins, 1973) in pencil in the lower right margin; an artist’s proof aside from the edition of 60; published by Museo Picasso, Barcelona and printed by Foto-Repo S.A. Barcelona, 1966

Catalogue Raisonné & COA:
Pablo Picasso The Wait (L’attente), 1966 is fully documented and referenced in the below catalogue raisonnés and texts (copies will be enclosed as added documentation with the invoices that will accompany the final sale of the work):

3. Daix, Pierre and Georges Boudaille. Picasso: The Blue and Rose Periods, A Catalogue Raisonné of the Paintings, 1900-1906. Edition Ides Et Calendes: Switzerland, 1960. The original painting is listed as cat no V.II.

About the Framing:
Pablo Picasso The Wait (L’attente), 1966 is framed to museum-grade, conservation standards, presented in a complementary moulding and finished with silk-wrapped mats and optical grade Plexiglas.