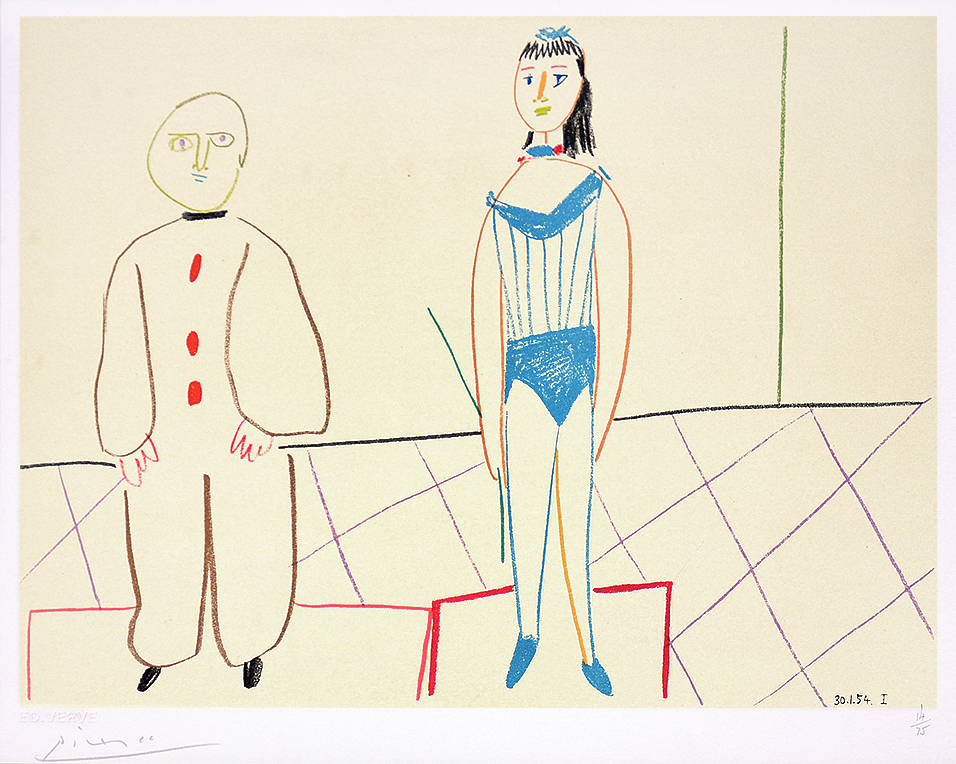 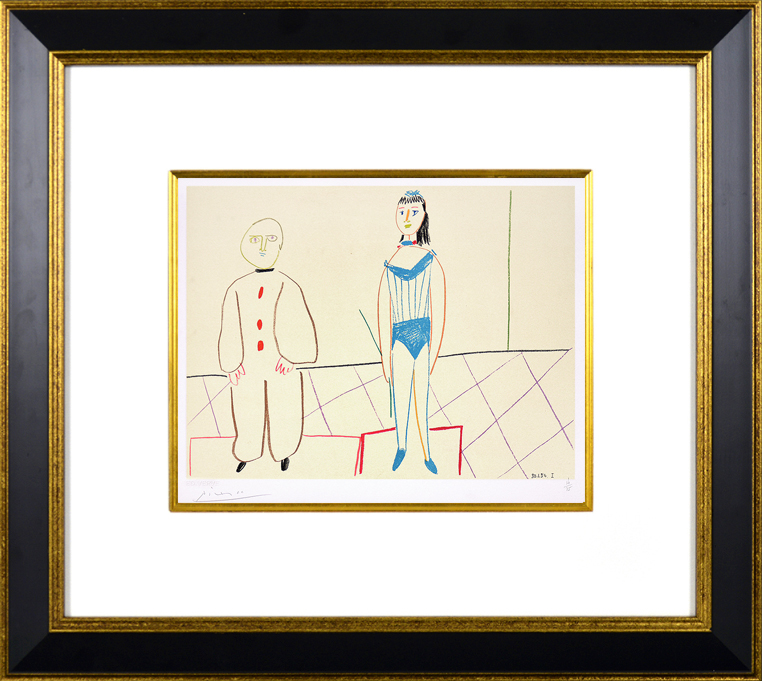 Pablo Picasso Clowne et acrobate (Clown and Acrobat) / One Plate, from Verve Nos 29-30, 1954 is a lithograph printed after a crayon drawing by Picasso for Verve magazine. Verve, or “The Review of Art and Literature “, was issued regularly in France between the years 1937 and 1960. The magazine was the creation of a Greek man known as Tériade. The purpose of the magazine was to present the most intimate look at artists’ interactions with the issues of their time.

The Fall 1954 issue of Verve was focused on Picasso. For this edition, Picasso created 180 original drawings for the magazine. The drawings were included in a double issue of Verve with a preface signed by Tériade. Of Picasso’s contributions to the magazine, Teriade wrote “last winter, from mid-December to the end of January 1954, Picasso was working indefatigably on this series of drawings, which rank among the finest, boldest, most poignantly human of all he has produced in the course of his long and brilliant career (Anthonioz, pg 255).” It is not hard to imagine this as a period of personal reflection for Picasso as his 10 year relationship with Francois Gilot had ended shortly before the publication of this issue. The drawings captured within the volume range from grotesque to simple. It is undeniable that each drawing is inextricably bound to Picasso’s personal life.

In this lithograph, a clown and a woman stand next to each other. The woman wears a blue hat and a striped leotard and a colorful necklace. The two characters stand apart, both facing the viewer. Their positioning creates a sense of despondency and rigidness despite their playful costumes. Picasso has always been fascinated with the duality of clowns and harlequins. For him, these actors embody both human comedy and tragedy. This seemingly simple work also contains wonderful subtle details. For instance, multi-colored lines outline the shapes of their bodies and clothing. Below their feet, thin lines cross to create the appearance of a tiled floor. This wonderful composition is a quintessential Picasso work.

Created in 1954 after an original crayon drawing, Clown and Acrobat (Clowne et Acrboate) / One Plate, from Verve Nos 29-30 is a color lithograph on wove paper. This work is hand-signed by Pablo Picasso (Malaga, 1881- Mougins, 1973) in pencil in the lower left margin and numbered from the edition of 75 in pencil in the lower right margin.

Catalogue Raisonné & COA:
Pablo Picasso Clown and Acrobat (Clowne et Acrboate) / One Plate, from Verve Nos 29-30, 1954 is fully documented and referenced in the below catalogue raisonnés and texts (copies will be enclosed as added documentation with the invoices that will accompany the final sale of the work).

1. The original crayon drawing is documented in The Picasso Project, Picasso's Paintings, Watercolors, Drawings and Sculpture, The Fifties I, listed as 54-133.
2. A Certificate of Authenticity will accompany this work.

About the Framing:
Framed to museum-grade, conservation standards, Pablo Picasso Clown and Acrobat (Clowne et Acrboate) / One Plate, from Verve Nos 29-30, 1954 is presented in a complementary moulding and finished with silk-wrapped mats and optical grade Plexiglas.