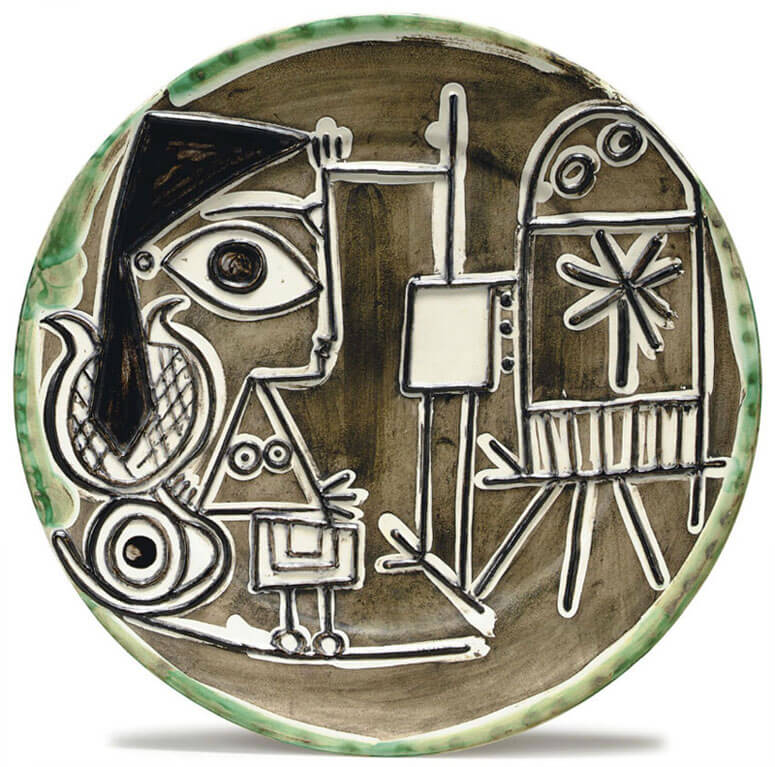 Pablo Picasso Jacqueline au chevalet (Jacqueline at the Easel), 1956 exemplifies Picasso's mastery of the ceramic medium, as we witness the artist's second wife, Jacqueline Roque, in a reversal of roles. By depicting her at the easel instead of in front of it, Picasso foregrounds Jacqueline's role as a great muse for his art. Out of all of his lovers, Jacqueline may have had the greatest impact on the artist and his work, figuring prominently in countless works dating to the last two decades of his life. This particular work is noteworthy for its remarkable use of contrast. Bold black lines juxtaposed against areas of white convey the distinct geometric figures of Jacqueline and the easel, while a lovely green and black border encompasses the central image.

Created in 1956, this original round dish of white earthenware clay with decoration in ivory, black, and green engobes under a partial brushed glaze is numbered from the edition of 200 on the reverse and bears two publisher's stamps on the verso: "'EMPREINTE ORIGINALE DE PICASSO' and 'MADOURA PLEIN FEU'.

Catalogue Raisonné & COA:
Pablo Picasso Jacqueline au chevalet (Jacqueline at the Easel) is fully documented and referenced in the below catalogue raisonnés and texts (copies will be enclosed as added documentation with the invoices that will accompany the final sale of the work).