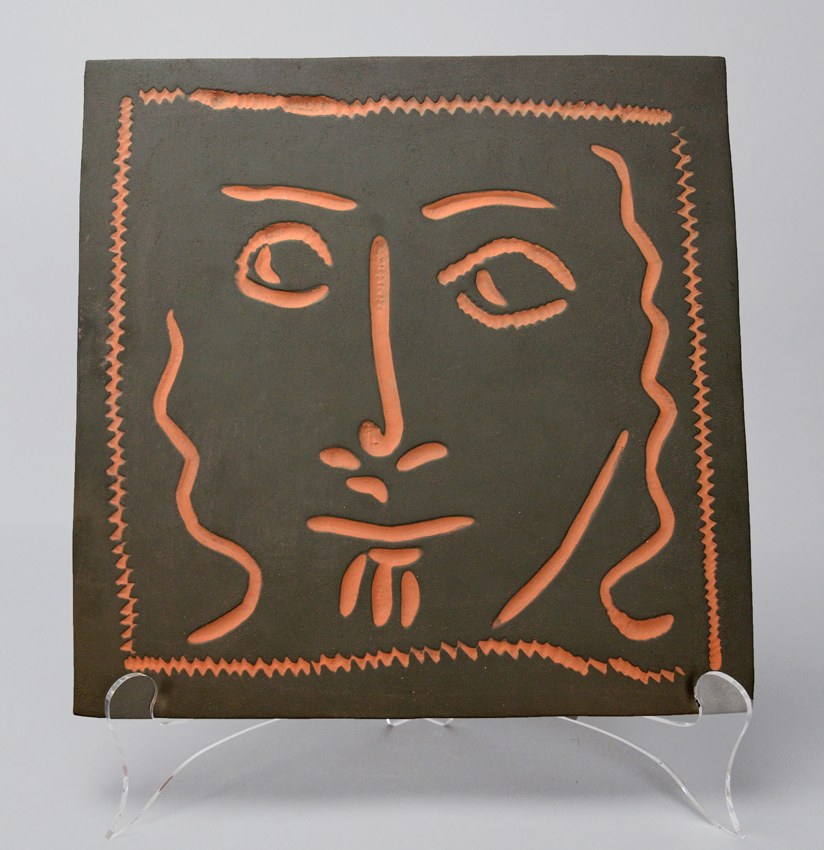 Pablo Picasso ceramic Curly Haired Face (Visage aux cheveux bouclés), 1968-69 captures the bemused face of a man. Common on many Picasso ceramic plaques that depict faces are the three lines on the chin. These lines could be read as facial hair, but they also appear on the female faces, so perhaps they are meant to be read simple as facial lines. There is no correct answer, only the interpretation of the viewer. With textured curls cascading down the side of his face and a thin defined nose with wide gazing eyes, he appears to be taking his surroundings in. The long line of the nose goes down the center of the tile, creating a symmetry with the eyes and nostrils on either side. The face takes up most of the large tile, but there is a simple border - four lines - that surrounds him. As the man looks out of the tile, it is almost as if he is looking out of a window. Done in a simple, yet captivating black engobe, the natural red clay impression showing through gives the work a sense of character that would not be possible with this splash of color.

Created in 1968-1969, this Madoura plaque of red earthenware clay, printed with engobe pad (black) is numbered from the edition of 200. This work is stamped with the 'MADOURA PLEIN FEU' and ‘EMPREINTE ORIGINALE DE PICASSO’ pottery stamps on the underside.

CATALOGUE RAISONNÉ & COA:
Pablo Picasso ceramic Curly Haired Face (Visage aux cheveux bouclés),1968-69, is fully documented and referenced in the below catalogue raisonnés and texts (copies will be enclosed as added documentation with the invoices accompanying the sale of the work):