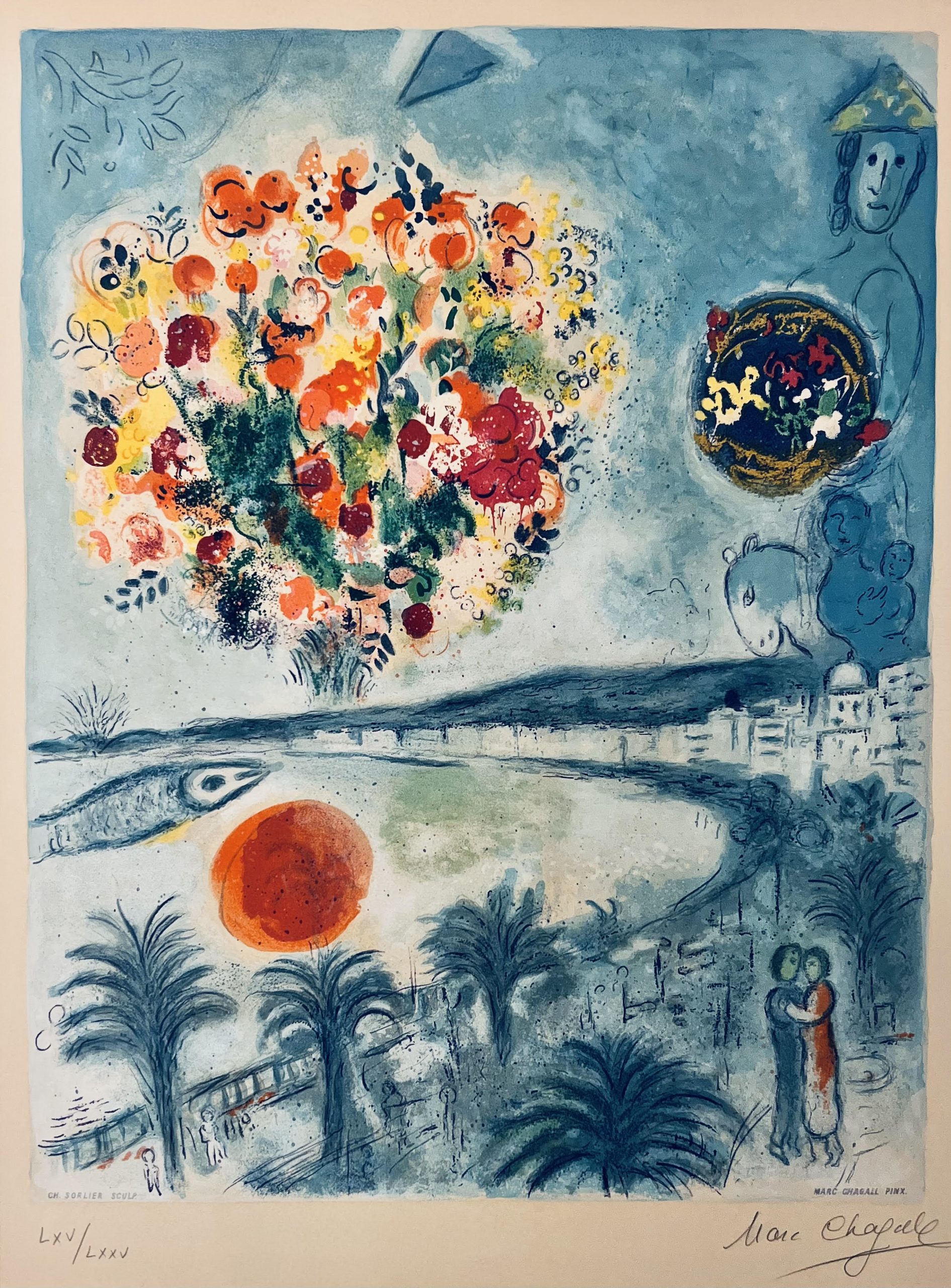 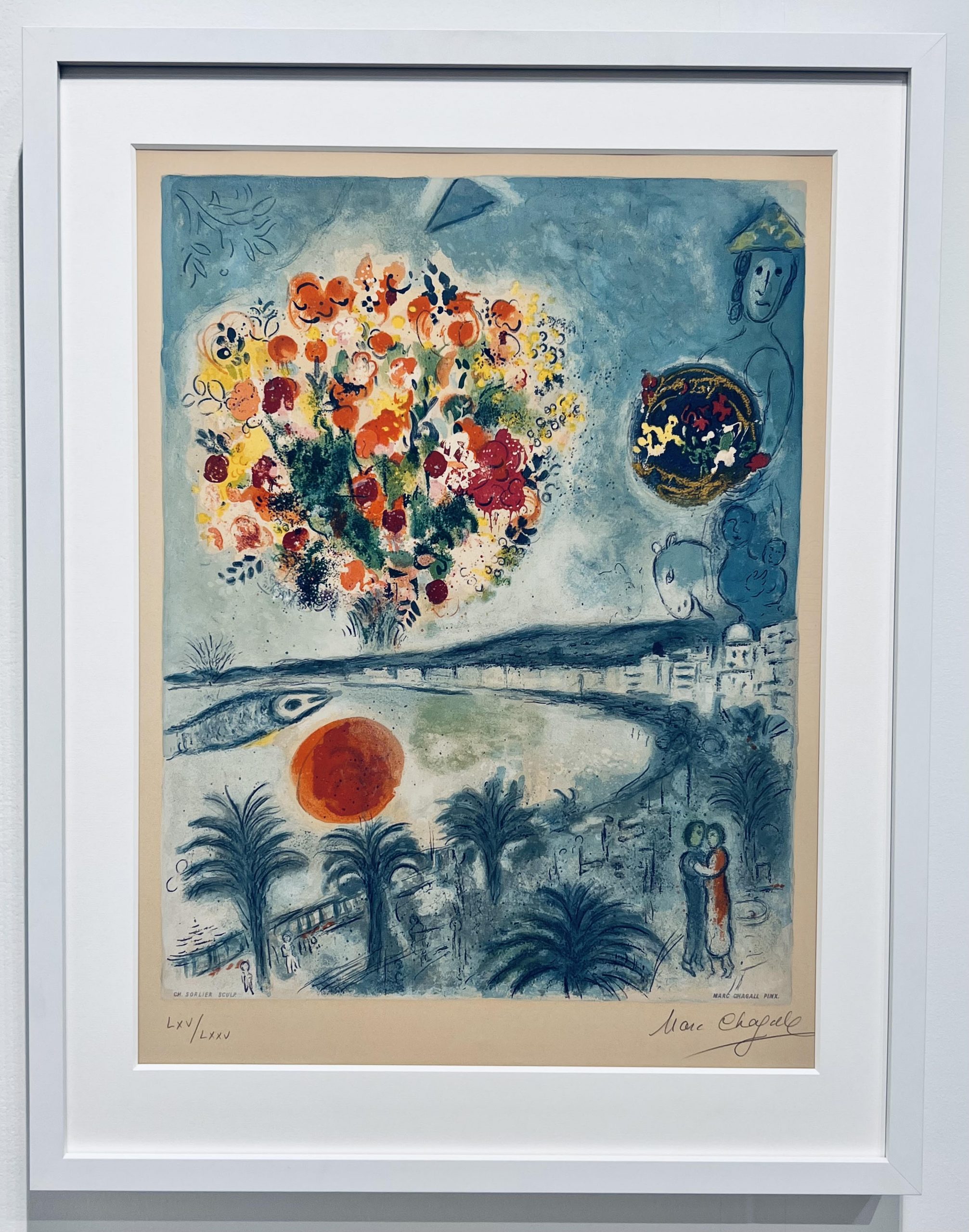 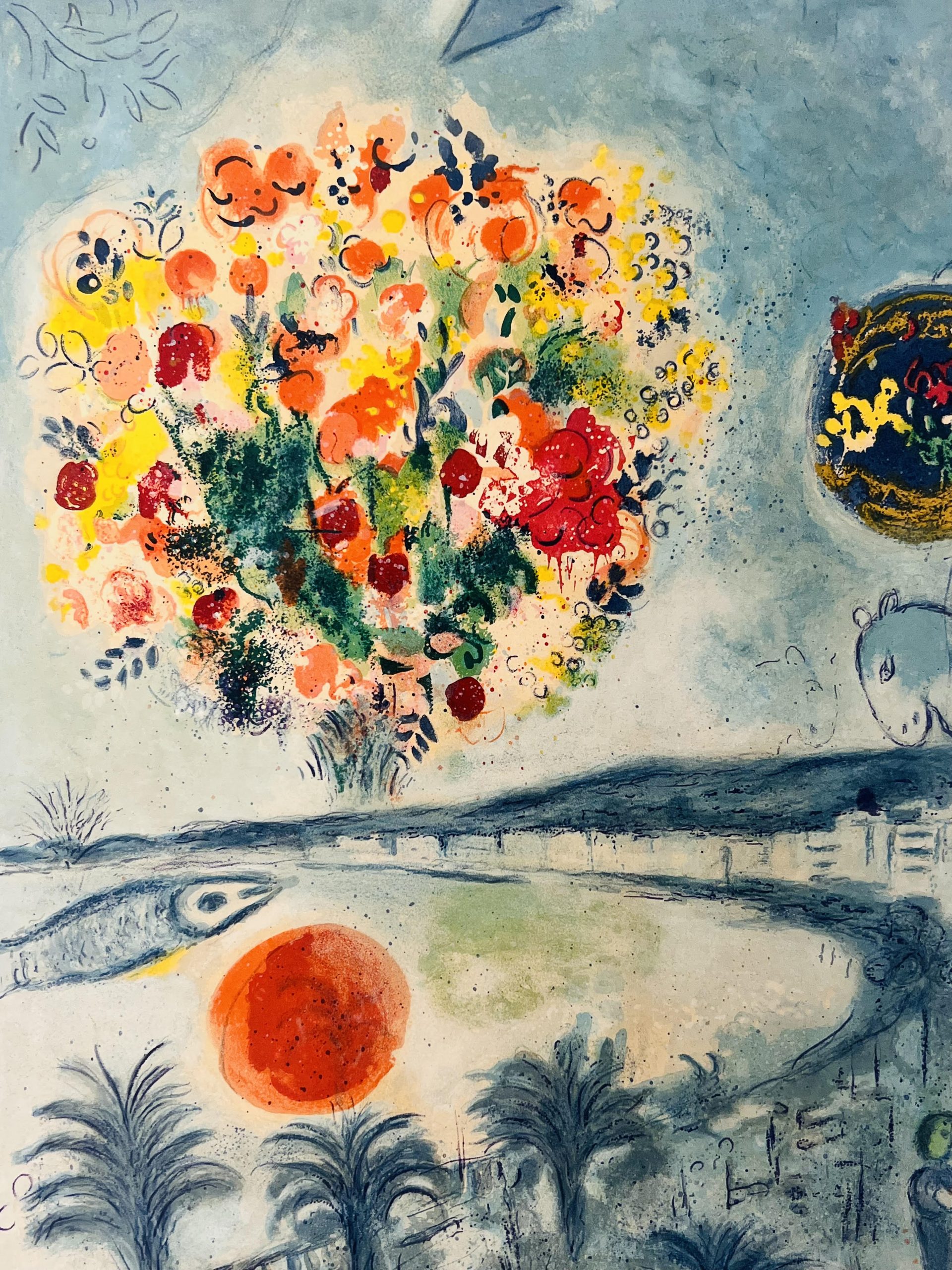 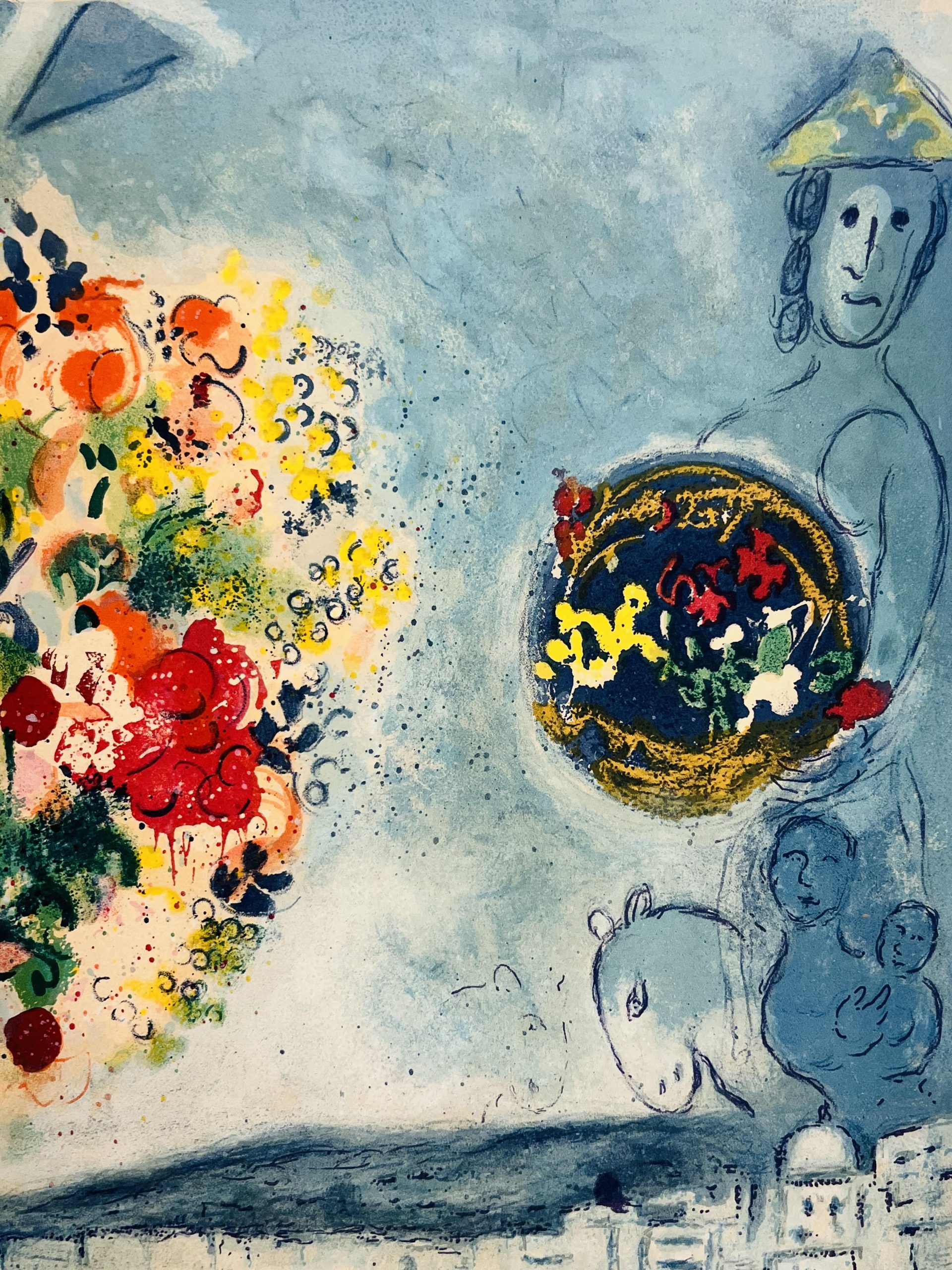 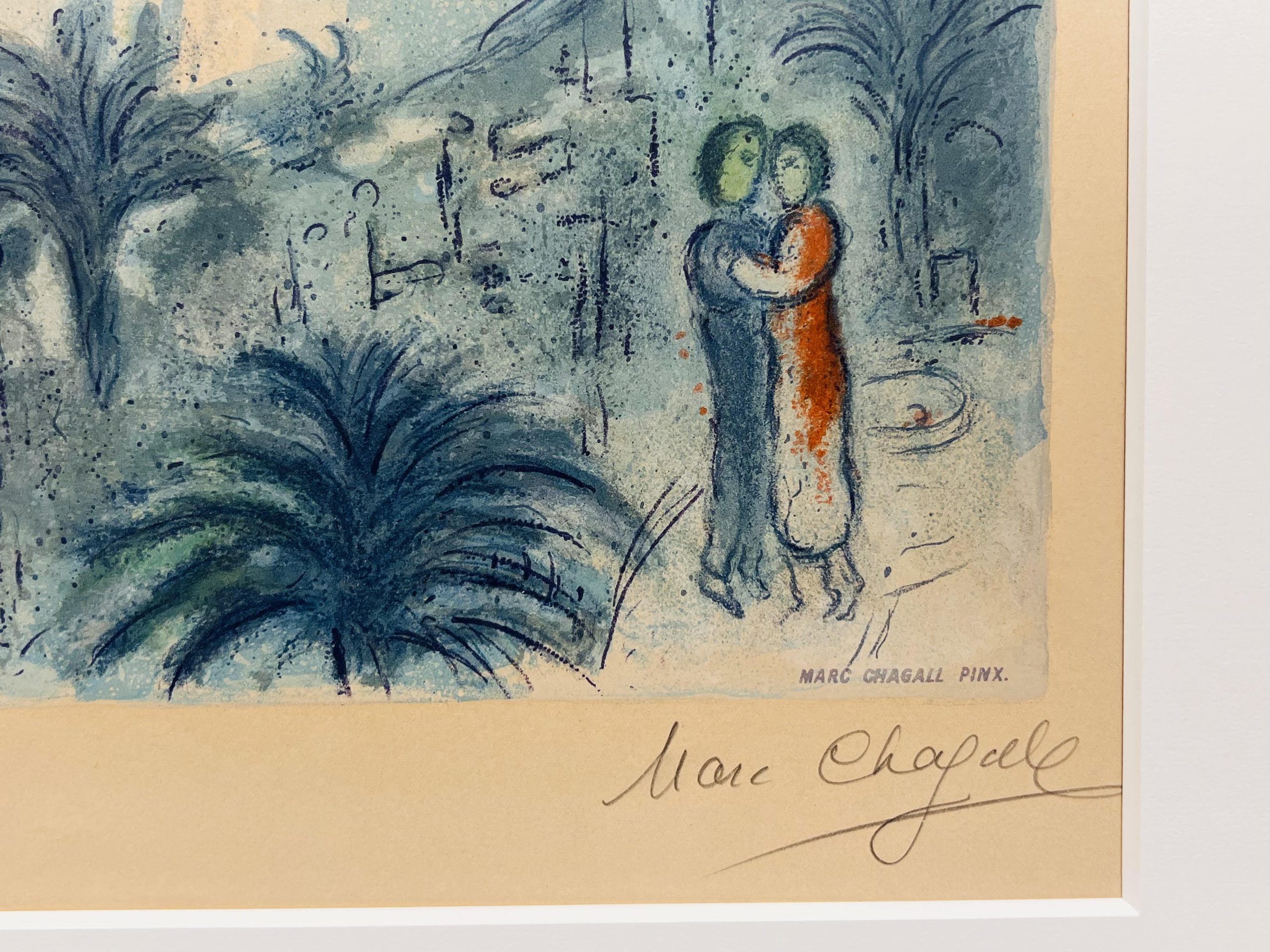 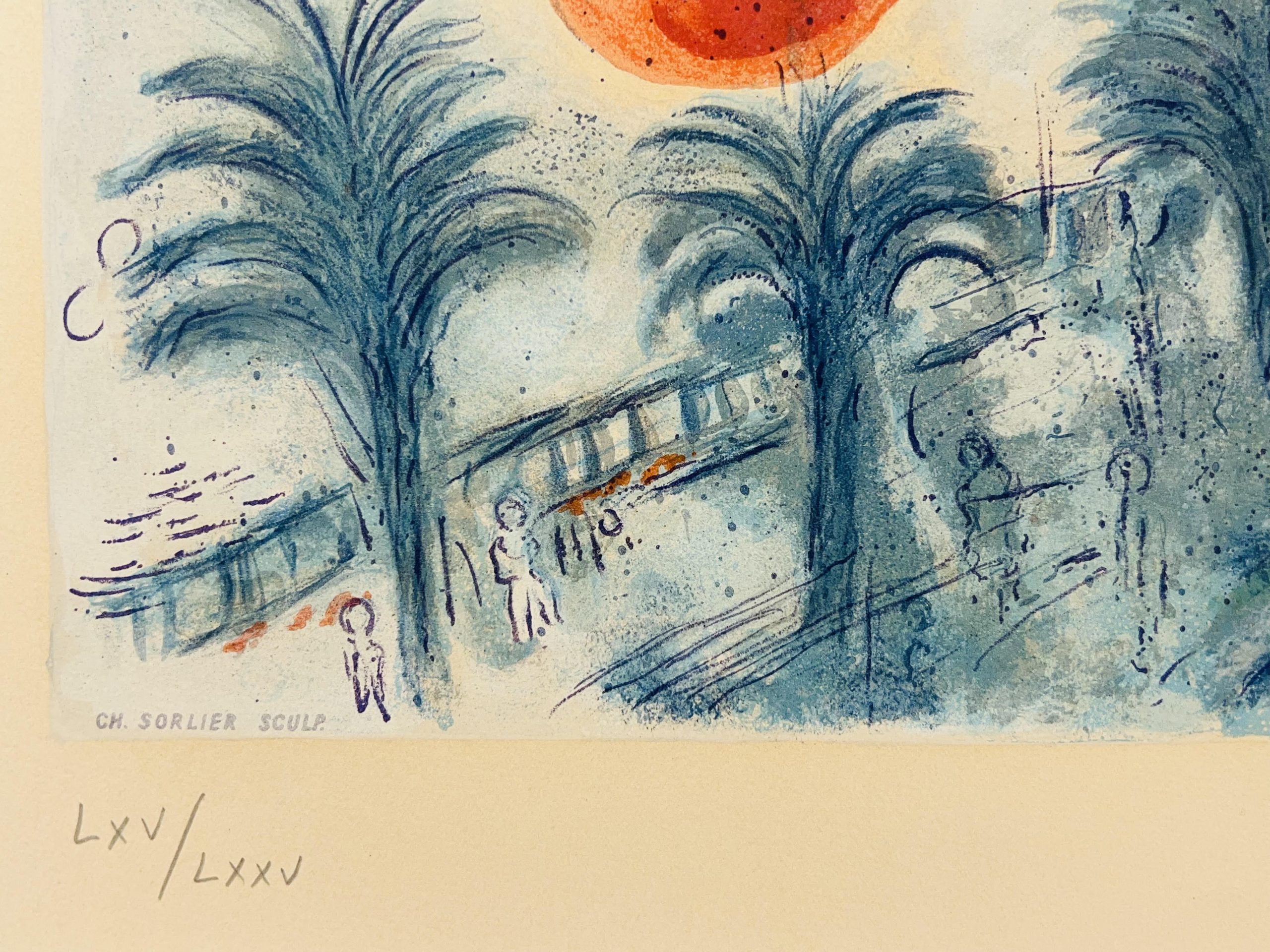 Marc Chagall lithograph Soleil Couchant (Sunset), from Nice and The Côte d’Azur, 1967, offers a highly textured surface, Chagall painstakingly depicts the varied vegetation of the Cote d’ Azur, from the palm trees along the lower margin, to the vibrant bouquet of flowers, to the tree branch in the upper left.  The plethora of vegetation inspires a sense of continual growth and prosperity which is further echoed by the forms of the two lovers seen in the lower right. Connected to the bountiful bouquet by like tonalities, the two lovers drift away from the other figures depicted on the beach completely consumed by their shared devotion.  Chagall permeates the entire scene with the intense radiating warmth of the sun which is not seen but merely reflected in the waters of the bay.

Created in 1967, Marc Chagall Soleil lithograph Couchant (Sunset), from Nice and The Côte d’Azur, 1967 is a color lithograph on Arches wove paper hand-signed by Marc Chagall (Vitebsk, 1887 – Saint-Paul, 1985) in pencil in the lower right margin. This work is numbered from the edition of 150 in pencil in the lower left margin (aside from 75 proofs signed and numbered in Roman numerals on Arches wove paper and 10 artist’s proofs).  Verso is stamped in ink: “Marc Chagall, Soleil couchant, gouache sur papier, reproduite en lithographie, Charles Sorlier, graveur – Mourlot, imp.”

Catalogue Raisonné & COA:
Marc Chagall lithograph Soleil Couchant (Sunset), from Nice and The Côte d’Azur, 1967 is fully documented and referenced in the below catalogue raisonnés and texts (copies will be enclosed as added documentation with the invoices that will accompany the final sale of the work)

About the Framing:
Marc Chagall lithograph Soleil Couchant (Sunset), from Nice and The Côte d’Azur, 1967 is framed to museum-grade, conservation standards, presented in a complementary moulding and optical grade Plexiglas.