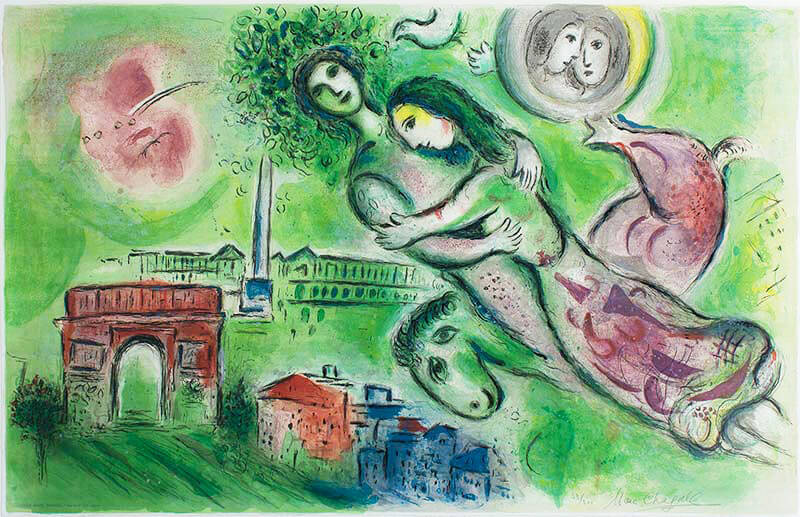 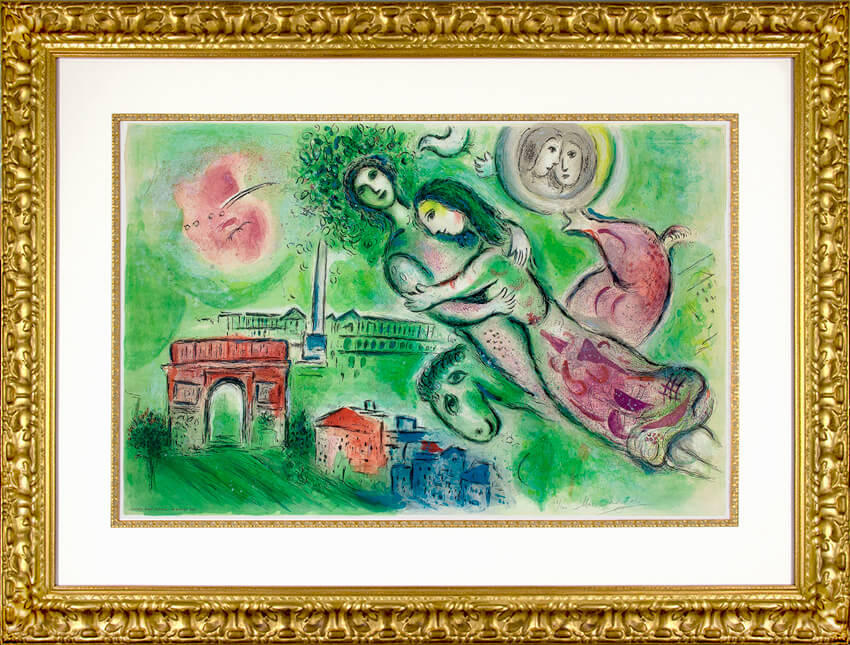 Marc Chagall Romeo and Juliette (Romeo and Juliet), 1964 is particularly remarkable due to its impressive size and superb color quality. Combining images of Paris, the figures of Romeo and Juliet and signature elements such as the horse and bouquet of flowers, Chagall captures a sense of romance and history. The great monuments of Paris function as a backdrop for the timeless love of Romeo and Juliet how appear floating through the sky. The lovers appear again encircled by the light of the moon in the upper right-hand corner, possibly symbolizing their eternal unity and undying love.

The decoration for the ceiling of the Paris Opera by Chagall was commissioned by André Malraux, then the Cabinet Minister in charge of the Cultural Affairs.

The artist hesitated for a long time before finally accepting the assignment. When he went to work, he started by executing a number of small sketches before he created two large dummies, which he submitted to André Malraux so that he could select one. Thus once again Chagall demonstrated the humility and integrity which were characteristic of the man and a hallmark of all the work which he undertook.

Chagall worked from January to July, 1964, to complete this painting. The opening ceremony for the new ceiling of the Opera was arranged under the supervision of André Malraux and took place on the evening of September 23, 1964. The entire corps de ballet participated in the event and there was a performance of Daphnis and Chloe by Maurice Ravel, with sets and costumes by Marc Chagall. To the strains Jupiter Symphony of Mozart the ceiling was illuminated for the first time, revealing this exceptional work to the admirers of the Master. It should be noted that this masterpiece was a gift from Chagall to Paris and that he accepted absolutely no compensation for the titanic task. (Sorlier, pg. 96)

Created in 1964, this work was adapted by Charles Sorlier from a preliminary study created by Chagall for the new ceiling of the Opera Garnier in Paris. This particular image was created as a tribute to Berlioz for his rendition of the classic, "Romeo and Juliet." Printed on Arches wove paper and numbered from the edition of 200 in pencil in the lower right (aside from 25 artist's proofs). Hand signed by Marc Chagall (Vitebsk, 1887 - Saint-Paul, 1985) in pencil in the lower right with the inscription: 'D'Après Marc Chagall - CH. Sorlier Grav' in the lower left.

Catalogue Raisonné & COA:
Marc Chagall Romeo and Juliet (Romeo et Juliette), 1964, is fully documented and referenced in the below catalogue raisonnés and texts (copies will be enclosed as added documentation with the invoices that will accompany the final sale of the work).

About the Framing:
Framed to archival museum grade conservation standards, Marc Chagall Romeo and Juliet (Romeo and Juliette), 1964 is framed in a complementary moulding with silk mats and optical grade Plexiglas.