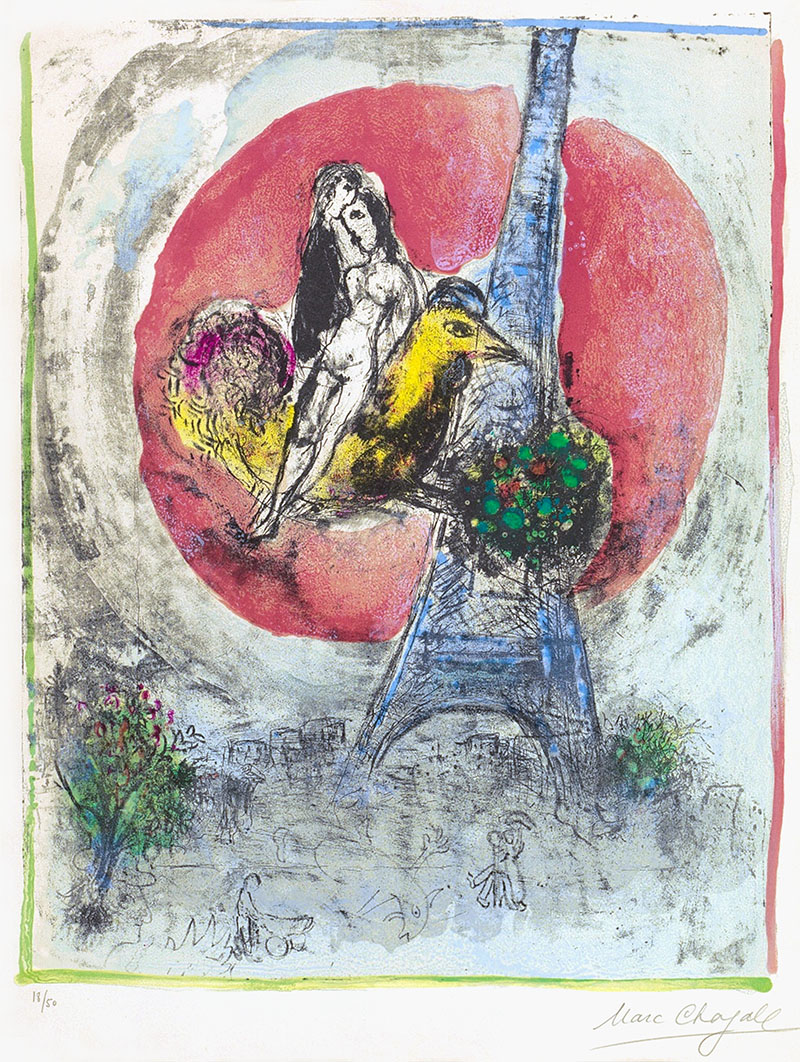 A tenderly embracing couple sail across a dreamy Parisian sky on the back of a rooster in this whimsical Marc Chagall Les Amoureux de la Tour Eiffel (The Eiffel Tower Lovers), 1960.  A gorgeous red sun shimmers low in the dusky sky and the iconic form of the Eiffel tower rises up from the ground. The buildings of Paris, blooming shrubbery, and strolling figures sprawl at the tower’s feet, peaceful and grounded. Above them, against the backdrop of a fiery sun, the ivory nude figure of a woman leans tenderly into the arms of her lover, merging them into one. Their airborne steed is a fantastically large rooster with beautifully hued yellow and magenta plumage. The apple-like sun, the rooster and lovers, and the shimmery Paris skyline were some of Chagall’s favorite and most-used motifs. Here this cornucopia of symbolic imagery combines into a beautiful, magically poetic scene.

Originally conceived as the frontispiece of an album of posters created at the Imprimerie Mourlot, Paris, this lithograph was made by the artist’s own hands. It was Chagall himself who took up a lithographic crayon and drafted this mature image late in his career. Les Amoureux creates for the viewer a dream, where the sky swirls around the sun and lovers take to the air for a world all their own. This print showcases Chagall’s vision of the French capital at its most romantic and beautiful.

Created in 1960, this color lithograph on Arches wove paper with Arches watermark is hand signed by Marc Chagall (Vitebsk, 1887 - Saint -Paul, 1985) in pencil in the lower right margin. A state II of II impression, this color lithograph is numbered from the edition of 50 in pencil in the lower left. State I impressions of Les Amoureux de la Tour Eiffel shows the black lines of the image, before the composition was printed in color. As one of fifty hand-signed and numbered impressions, this example was pulled alongside an edition of 25 hand- signed and numbered artist proofs, before the addition to the lithographic stone of a short block of text on the subject of the engraving. After the text was added, another edition of 125 was created as the frontispiece of the 4th Poster album brought out by the Mourlot Print-Shop.

Marc Chagall The Eiffel Tower Lovers (Les Amoureux de la Tour Eiffel), 1960, is fully documented and referenced in the below catalogue raisonnés and texts (copies will be enclosed as added documentation with the invoices that will accompany the sale of the work).