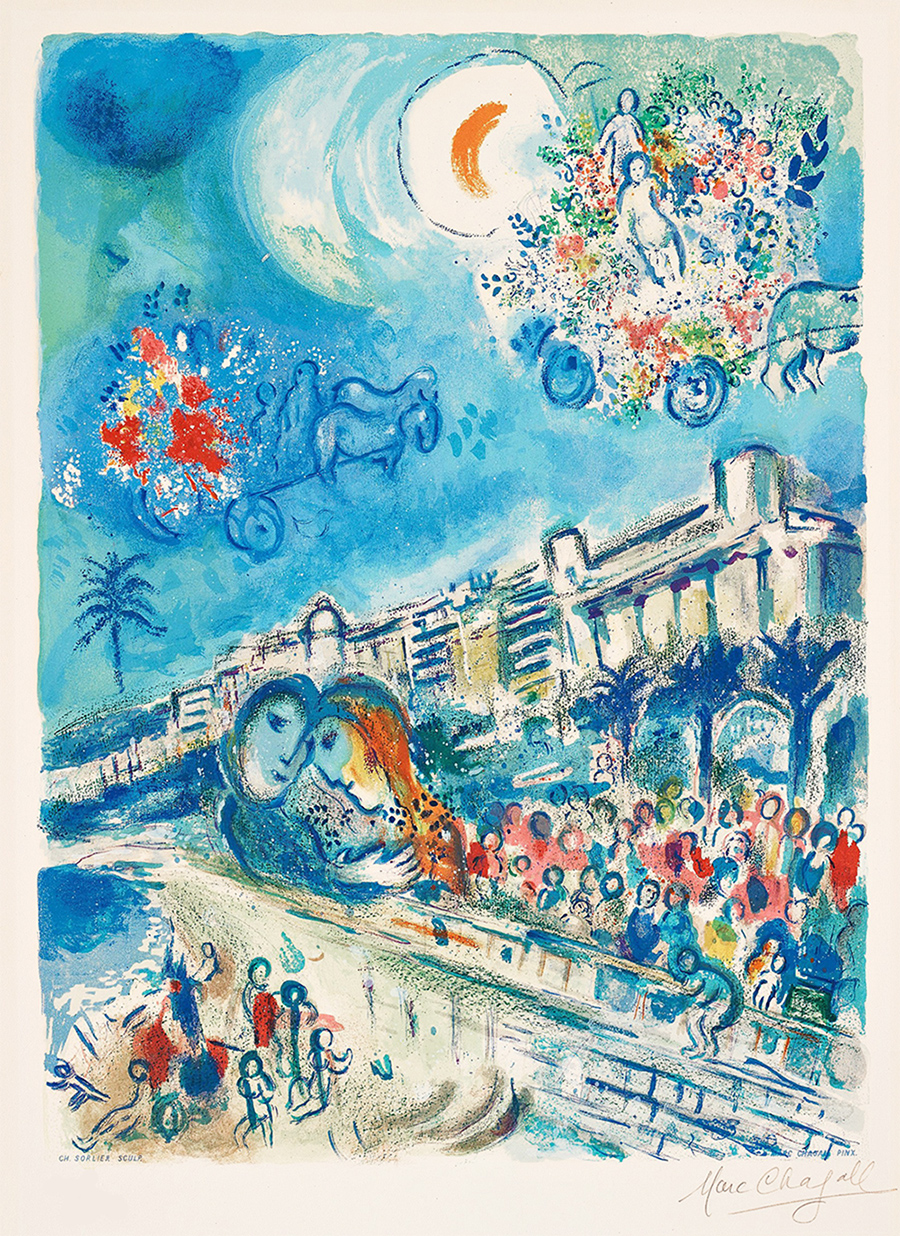 Marc Chagall Bataille de Fleurs (Carnaval of Flowers), 1967 depicts the 'Battle of the Flowers' that is part of the annual Nice Carnival that occurs from the end of February to early March. The highlight of the carnival, the 'Battle of the Flowers,' takes place on the Promenade de Anglais and is composed of a parade of floats of exquisite flower arrangements. In this stunning piece, Chagall captures the excitement surrounding this event as well as the sheer beauty of the vibrant floral arrangements. This whimsical work conveys the Battle of the Flowers in a magical light, as the horse-driven floral floats appear to fly in the blue sky. Beneath these soaring floats, a colorful crowd composed of reds, blues, yellows, and pinks gathers on the streets to view this spectacle of flowers. Chagall highlights one couple in particular, as they stand near the stone wall, embracing in a moment of love and celebration while, behind the throng of people, the viewer can make out the elegant buildings of the city of Nice.

This piece is part of a set of 12 lithographs titled Nice and the Côte d'Azur that were created in collaboration between Chagall and Charles Sorlier and run in 1967, of which there were 235 total. This work is numbered from the edition of 150 in pencil in the lower left margin and printed on Arches wove paper (aside from an edition of 75 signed and numbered in Roman numerals and 10 artist's proofs). This piece is hand signed by Marc Chagall (Vitebsk, 1887 - Saint-Paul, 1985) in pencil in the lower right margin.

Catalogue Raisonné & COA:
Marc Chagall Bataille de Fleurs (Carnaval of Flowers), 1967 is fully documented and referenced in the below catalogue raisonnés and texts (copies will be enclosed as added documentation with the invoice accompanying the sale of the work).

About the Framing:
Marc Chagall Bataille de Fleurs (Carnaval of Flowers), 1967 is framed to museum-grade, conservation standards, presented in a complementary moulding and finished with silk-wrapped mats and optical grade Plexiglas.