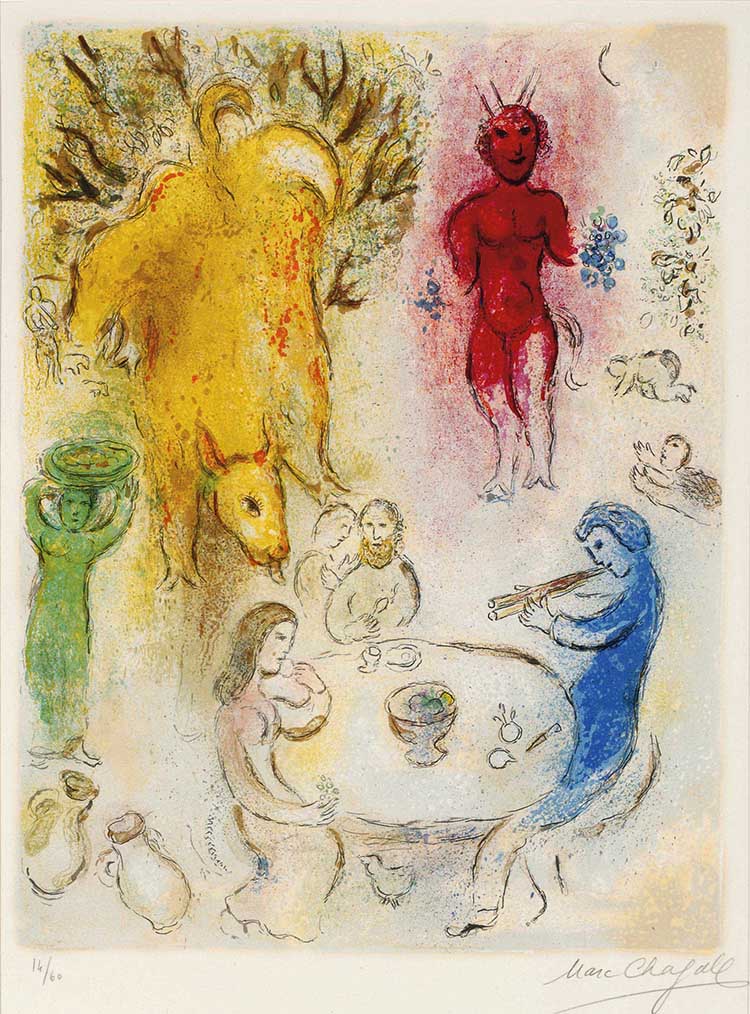 Marc Chagall’s Banquet de Pan (Pan’s Banquet), from Daphnis et Chloé, 1961 is one of the stunning lithographs within the illustrated Daphne and Chloe series that Fernand Mourlot considered to be one of "the most important graphic works that Marc Chagall has created thus far." Chagall dedicated three years to this project and undertook a series of lithographs that perhaps defined his career, making these pieces "a work of notable importance which, unquestionably, can be placed at the top of the list of illustrated works of our time" (Mourlot 131). Daphnis and Chloe, the two romantic heroes of Greek writer, Longus, are two childhood friends who undergo the trials and tribulations of growing up and, consequently, falling in love. Evoking the rich Mediterranean landscapes from which Chagall personally drew inspiration, this work is a masterpiece any Chagall enthusiast would admire.

Marc Chagall’s Banquet de Pan (Pan’s Banquet), from Daphnis et Chloé, 1961 illustrates the sacrificial offering and banquet for the god Pan in honor of Chloe’s safe return from the hands of the Methymneans, The offering itself, a flayed goat, is rendered in a golden yellow at the upper left corner of the image, filling about a quarter of the whole composition. The oversized scale of the flayed goat visually emphasizes the purpose of the gathering itself as a sacrificial banquet. On the foreground of the composition, the sapphire blue figure playing the flute represents Daphnis, while Chloe is embodied in the female figure across the table. Placing Daphnis and Chloe across from each other at the table not only balances the composition but also alludes to the pairing of these two protagonists in the narrative. Marc Chagall’s Banquet de Pan (Pan’s Banquet), from Daphnis et Chloé, 1961 depicts a unique moment of communal gathering and leisure in Longus’ narrative.

Created in 1961, Marc Chagall’s Banquet de Pan (Pan’s Banquet), from Daphnis et Chloé, 1961 is a color lithograph on Arches paper. This work is hand-signed by Marc Chagall (Vitebsk, 1887 - Saint-Paul, 1985) in the lower right margin. Numbered from edition of 60 in the lower left margin.

Marc Chagall’s Banquet de Pan (Pan’s Banquet), from Daphnis et Chloé, 1961 is fully documented and referenced in the below catalogue raisonnés and texts (copies will be enclosed as added documentation with the invoices that will accompany the sale of the work).