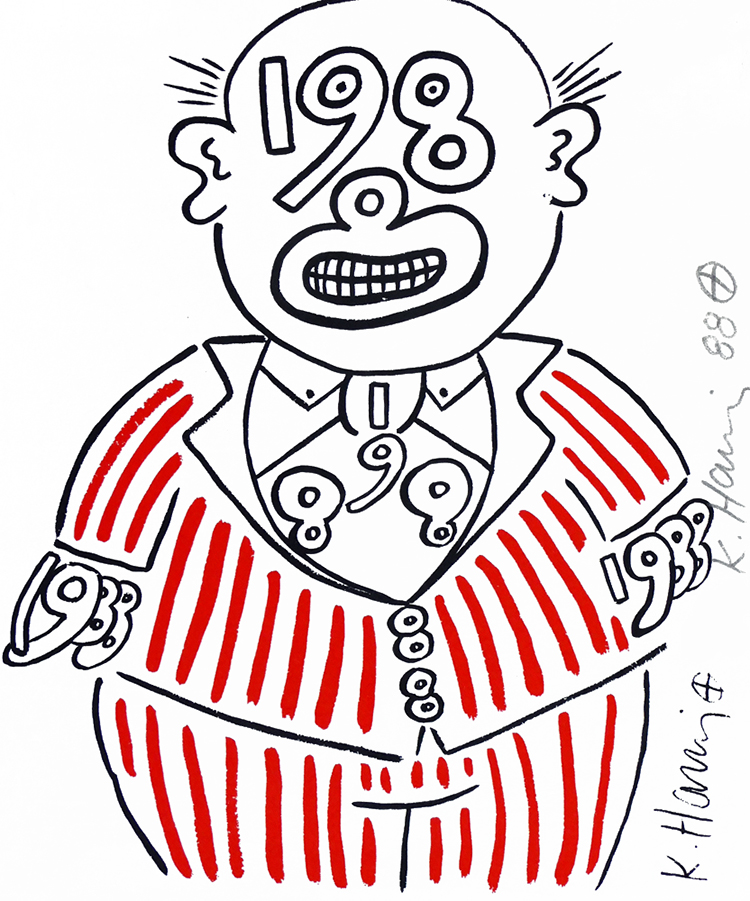 Keith Haring Untitled, 1988 is a compelling work from the height of the artist’s career. In this petite work, Haring illustrates a caricature of a man in black, white and red. The rendering of this figure along with the sketchy quality of its mark-making gives it a hand-drawn quality; this characteristic as well as its small stature creates an aura of intimacy surrounding the work. The marks also retain a sense of precision that comes with silk screening or, as it is now known, screen printing. The piece appears to be political in nature with the obtuse figure’s suit accentuated with bright red vertical lines extending down its entirety which may refer to a right-wing political standing. The figure is littered with the number “1988,” which directly references the year of this work’s creation. Both of the figure’s hands are illustrated as this number in a bulbous font. Another set of this number is used to emphasize the shirt worn under the man’s suit, and two number eights act as the buttons of the red striped coat. Most notably, the largest ‘1988’ to appear in this work is drawn over the man’s face. His eyes peek through the cavities in the nine and the first eight while the second eight delineates the form’s nose and toothy grin.

Keith Haring Untitled, 1988 is fully documented and referenced in the below catalogue raisonnés and texts (copies will be enclosed as added documentation with the invoices that will accompany the sale of the work).

Framed to museum-grade, conservation standards, Keith Haring Untitled, 1988 is presented in a complementary moulding and finished with silk-wrapped mats and optical grade Plexiglas.