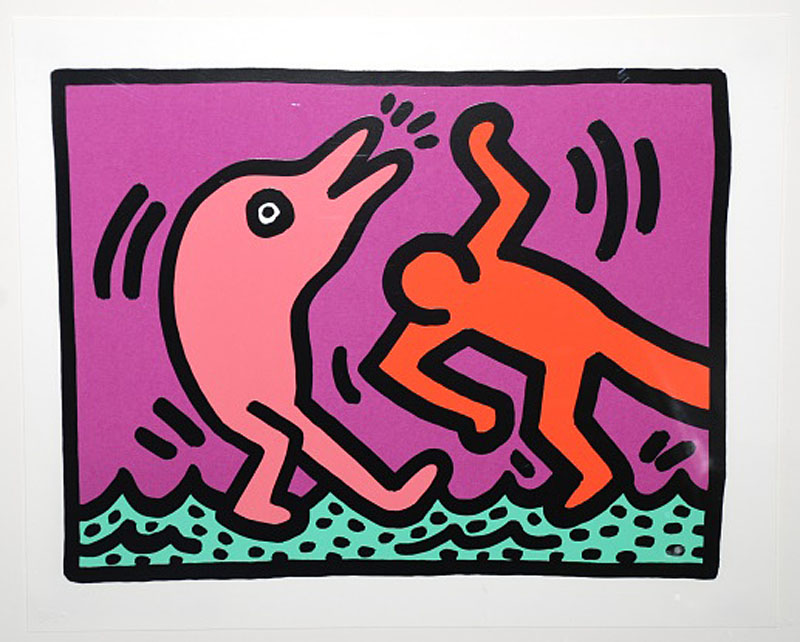 Keith Haring Pop Shop V (Plate 4), 1989 is the fourth and final installment of the artist’s Pop Shop V portfolio of 1989. The print has two central figures that make of the majority of the composition. With a dolphin-like figure in pink dancing on the water with the orange human figure, Haring creates a fun and whimsical scene. The pink and orange contrast nicely with the purple of the sky and blue of the water in this brightly saturated print. Haring also added short black action lines around the figures, implying motion, sound and energy. Haring was fascinated by Egyptian hieroglyphs and how pictorial symbols could communicate thoughts and ideas. He created his own visual language of symbols and motifs that could be understood by anyone. Through this method, Haring is able to communicate non-visual concepts, like motion and noise.

Haring created multiple Pop Shop portfolios during the span of his career and derived the name from the original Pop Shop that he opened in a retail space in downtown New York in 1986. This shop was opened with the intention of making the artist’s work accessible to the general public, and this accessibility is an explicitly Pop sentiment.

Keith Haring Pop Shop V (Plate 4), from the Pop Shop V Portfolio, 1989 is fully documented and referenced in the below catalogue raisonnés and texts (copies will be enclosed as added documentation with the invoices that will accompany the sale of the work).